Imagine a world where food routinely gets shipped thousands of miles away to be processed, then shipped back to be sold right where it started. Imagine cows from Mexicobeing fed corn imported from the United States, then being exported to the United States for butchering, and the resulting meat being shipped back to Mexico, one last time, to be sold. Imagine a world in which, in most years since 2005, China has somehow managed to import more goods from itself than from the USA, one of its largest trading partners.

This may sound like the premise of some darkly comic, faintly dystopian film – albeit one geared towards policy wonks. But it’s no joke – in fact, it is the daily reality of the global economy.

The above examples are all instances of ‘re-importation’ – that is, countries shipping their own goods overseas only to ship them back again at a later stage in the production chain. And these are far from the only instances of this head-scratching phenomenon. In the waters off the coast of Norway, cod arrive every year after an impressive migratory journey, having swum thousands of miles around the Arctic Circle in search of spawning grounds. Yet this migration pales in comparison to the one the fish undertake after being caught: they’re sent to China to be fileted before returning to supermarkets in Scandinavia to be sold. This globalization of the seafood supply chain extends to the US as well; more than half of the seafood caught in Alaska is processed in China, and much of it gets sent right back to American grocery store shelves.

Compounding the insanity of re-importation is the equally baffling phenomenon of redundant trade. This is a common practice whereby countries both import and export huge quantities of identical products in a given year. To take a particularly striking example, in 2007, Britain imported 15,000 tons of chocolate-covered waffles, while exporting 14,000 tons. In 2017, the US both imported and exported nearly 1.5 million tons of beef, and nearly half a million tons of potatoes. In 2016, 213,000 tons of liquid milk arrived in the UK – a windfall, had not 545,000 tons of milk also left the UK over the course of that same year.

On the face of it, this kind of trade makes no economic sense. Why would it be worth the immense cost – in money as well as fuel – of sending perfectly good food abroad only to bring it right back again?

The answer lies in the way the global economy is structured. ‘Free trade’ agreements allow transnational corporations to access labor and resources almost anywhere, enabling them to take advantage of tax loopholes and national differences in labor and environmental standards. Meanwhile, direct and indirect subsidies for fossil fuels, on the order of $5 trillion per year worldwide, allow the costs of shipping to be largely borne by taxpayers and the environment instead of the businesses that actually engage in it. In combination, these structural forces lead to insane levels of international transport that serve no purpose other than boosting corporate profits.

The consequences of this bad behavior are already severe, and set to become worse in the coming decades. Small farmers, particularly in the global South, have seen their livelihoods undermined by influxes of cheap food from abroad; meanwhile, their climate-resilient agricultural practices are actively discouraged by the WTO and ‘free trade’ agreements. And food processing and packaging – both critical for food that’s going to be shipped a long way from where it was produced – account for a significant proportion of the global food system’s greenhouse gas emissions.

With the new NAFTA, “there is no Alternative” 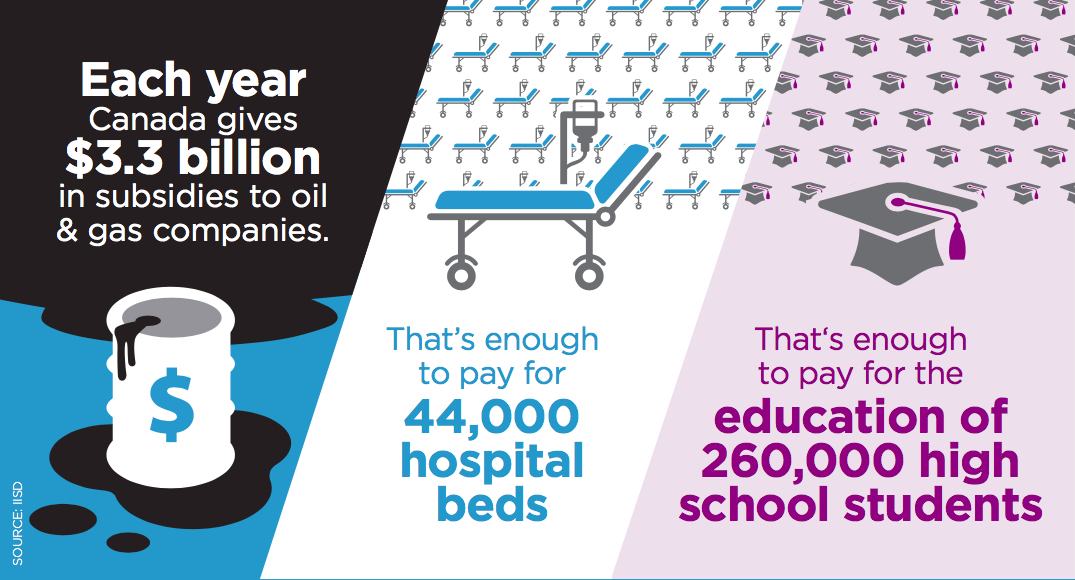 The present WTO framework thus imposes more constraints on renewable energy subsidies than on much larger and environmentally harmful subsidies to fossil fuels, which places it at odds with the key objectives of environmental policy.

Climate change is a major global challenge which, according to the UN (the UNFCCC), can best be addressed by reducing greenhouse gas emissions. Since almost two-thirds of global greenhouse gases are generated by the energy sector, a key plank of climate change policy is to transition from fossil fuels to clean energy. This post considers the role of the WTO in achieving this transition.

Energy subsidies have a great impact on climate change. Subsidies for fossil fuels (such as oil, natural gas and coal) directly encourage environmentally damaging means of generating energy and reduce the relative attractiveness of clean energy investments. By contrast, subsidies for renewable energy (such as wind, solar and hydro) can be used as an instrument to reduce greenhouse gas emissions not only by directly increasing clean energy generation but also by supporting innovations that improve its viability. Nevertheless, despite the recent rise in renewable energy subsidies ($140 billion in 2016), they are still significantly lower than fossil fuel subsidies ($260 billion in 2016).

Reflecting their ability to distort markets, WTO law has a special set of general rules on subsidies – the Subsidies and Countervailing Measures Agreement (the “SCM Agreement”), alongside the General Agreement on Tariffs and Trade (“GATT”). Subsidies can be counteracted by multilateral action through the WTO dispute settlement system or, where subsidized products affect the domestic market, by the adoption of domestic countervailing measures. At the multilateral level, six disputes have been brought so far to the WTO against renewable energy support programs. Yet environmentally harmful fossil fuel subsidies have never been challenged. Similarly, at the unilateral level, 41 trade remedy investigations in the renewable energy sector were initiated between 2008 and 2014. At the same time, unilateral trade remedies have not been used against fossil fuel production subsidies. Why is this happening? MORE