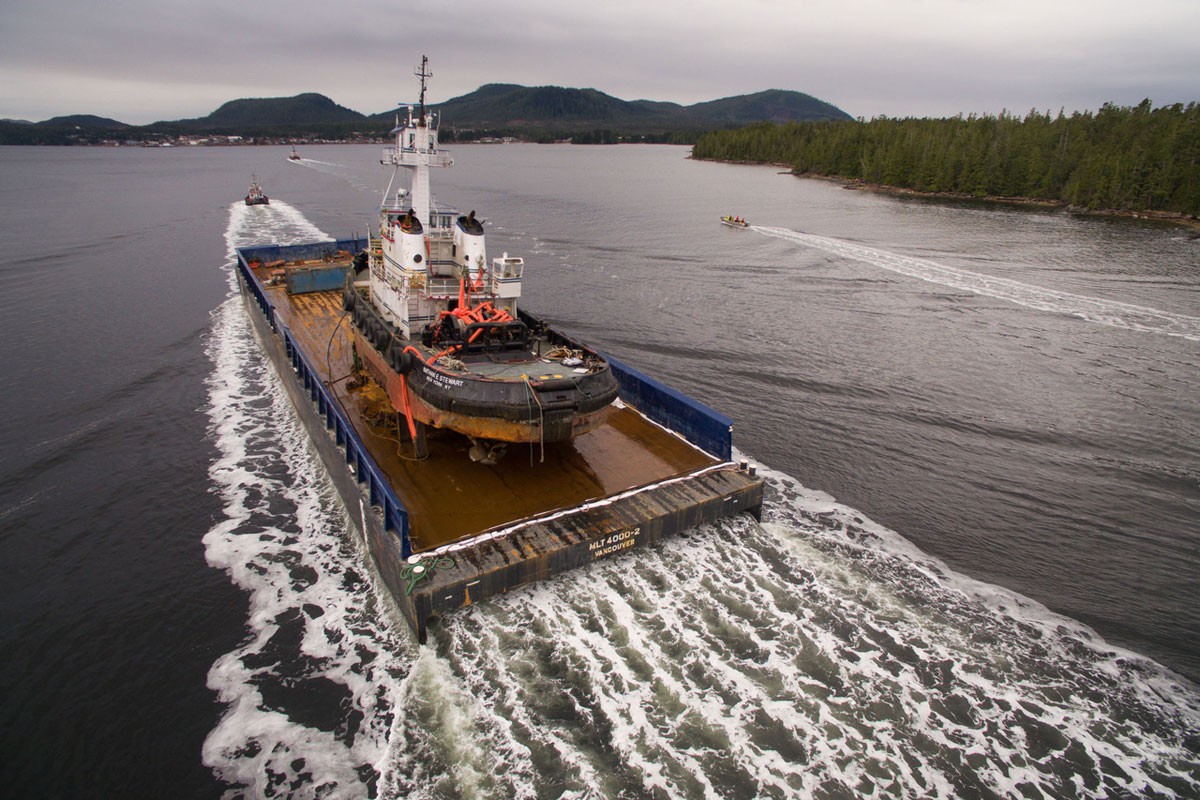 A different kind of sentencing hearing took place today on B.C.’s central coast, in an area known as the Great Bear Rainforest.

Three years after the Nathan E. Stewart sank, spilling 110,000 litres of diesel, effluent, and engine oil into Heiltsuk fishing grounds, the Indigenous nation is still waiting for justice. Canada charged Kirby – the Texas-based corporation that owns the ship – with nine criminal violations, including violating the Fisheries Act, the Migratory Birds Convention Act, and the Pilotage Act, for not having a pilot on board the ship.

The company pled guilty to three of those nine counts, and was sentenced today – though the penalties, $2.9 million, will do little to disrupt business as usual for Kirby, a multi-billion dollar company and one of the world’s largest marine shipping companies.

“Today we’re witnessing the sentencing of Kirby. No matter what the ruling is, this is us, showing who we are, and starting our healing process.”

But business as usual looks very different when an Indigenous community is at the helm. According to Heiltsuk law, justice begins when offenders sit together with all of the parties impacted by the offence; a talking stick is passed so everyone has an opportunity to speak and to be heard.

This morning, in the Bella Bella Community School gym, Kirby representatives sat together with first responders, fishers, and community members. They heard testimony from victims of the spill, and were invited to witness first-hand how the community is struggling to recover from an accident that – far from Houston, where the company is based – may have seemed like a minor hiccup in Kirby’s global operations.

The community has suffered devastating losses – including the closure of fisheries that once supported many families in the remote coastal village. Surrounded by drummers, and dressed in her family’s regalia, Heiltsuk councillor Megan Humchitt fought back tears as she spoke. “Today we’re witnessing the sentencing of Kirby. No matter what the ruling is, this is us, showing who we are, and starting our healing process.” MORE 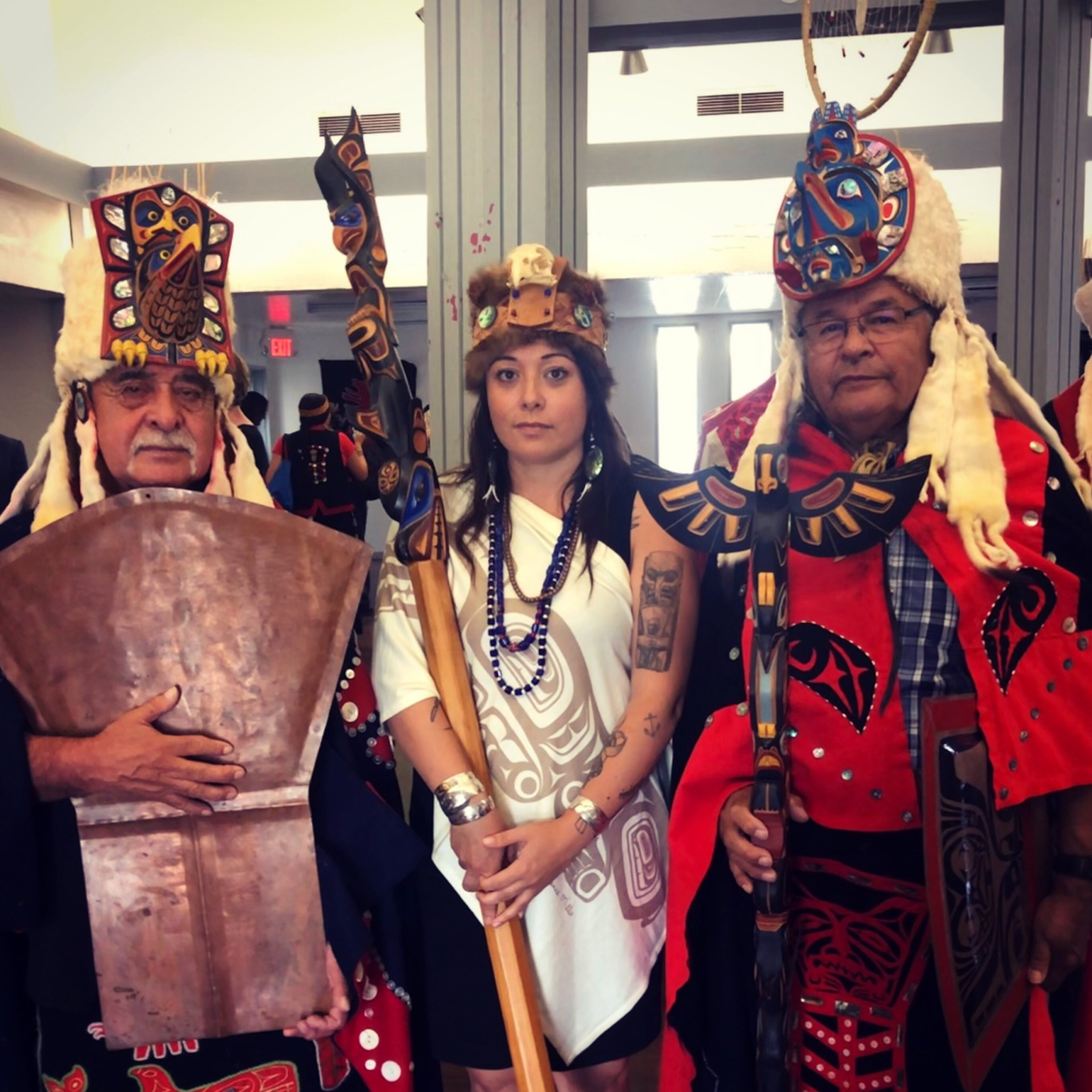 The company responsible for devastating an indispensable food harvesting site for the Heiltsuk community in Bella Bella, on the northwest coast of British Columbia, has been charged almost $3 million for violating three different acts. The penalty will be directed towards a government fund. Despite the judge’s decision Tuesday, Heiltsuk leadership and community members say no amount of money can change the devastation that has taken place.

“It has been an emotional rollercoaster for our community,” elected Chief Councilor Marilyn Slett told National Observer over the phone. “We all were impacted by the event, and it was triggered again today … The hearing brought us back to that moment, when we found out the Gale Pass had been contaminated.”

Gale Pass is one of many food harvesting sites off the coast of Bella Bella, a community of around 1,400 people. The coastal nation, which has one grocery store in town, has always relied on a healthy ocean for sustenance into the future. When news broke out about the tug running aground, it was a moment of terror, an experience no outsider could fully grasp.

The trauma of the incident has lived on. But if it’s true that trauma can activate a flight or fight response, Heiltsuk fought.

The nation held healing ceremonies for members, launched an investigation report on the incident, joined partnerships advocating for adequate marine response technologies and filed a claim against the federal and provincial governments, as well as the Kirby Corporation, which operated the ship.

A committee was established to review the investigation report and determine whether Heiltsuk traditional laws, Ǧviḷás, were breached in the event. The committee determined that their Ǧviḷás were indeed breached by the Kirby Corporation and the government, which they documented in an adjudication report. The 68-page report, outlines Heiltsuk jurisdiction as one of the most complex maritime Indigenous societies in the world. Rich in Heiltsuk culture, geography and history, the report identifies the spill as an assault on Heiltsuk antiquity. MORE