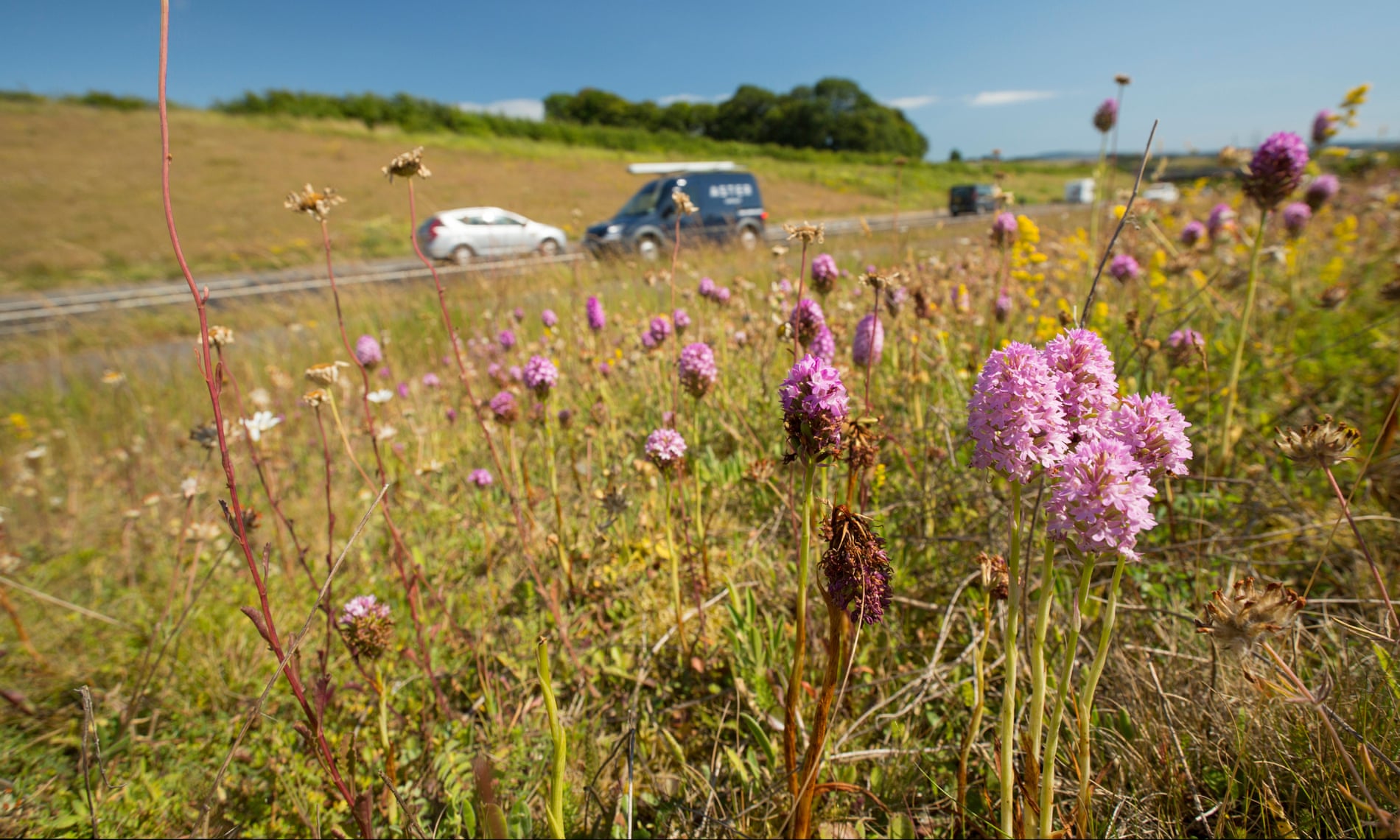 Main image: Traffic passing pyramidal orchids and other wildflowers along the A354, near Weymouth, Dorset. Photograph: http://www.pqpictures.co.uk/Alamy

n 2014, Giles Nicholson was battling the growing year from hell. A mild winter followed by a warm, wet spring had turbocharged a ferocious mass of cow parsley, nettles and dense grass along the hundreds of miles of road his team maintains for Dorset council. Austerity meant there was barely enough money to pay for repeated cuttings to hold back the matted swards. Complaints poured in about messy roadsides.

“[The machinery] wouldn’t go through it,” says Nicholson, recalling the overspilling verges.

But the chaos of that summer would prove an unlikely turning point for wildflowers and biodiversity in the English county. Vast stretches of roadside have been transformed. Where there were thick clumps of grass, there are low-growing wildflowers such as black medic, birds-foot trefoil and red clover. The verges are cut two or three times a year, not 12, saving the council tens of thousands of pounds. Butterflies and other invertebrates have returned in their droves.

The reasons behind this unlikely mini-revolution for biodiversity are simple. When the worst of the 2014 growing season was over, ecologist Philip Sterling was brought in to oversee the council’s service team. He and Nicholson, Dorset council’s countryside and greenspace manager, set about applying the centuries-old principles of hay making to the management of verges, cul-de-sacs and urban grass patches across the county. It is a practice that has now been adopted by other counties in the UK, including in Lincolnshire.

In Sandford, Wareham, wildflowers are part of an initiative to provide an attractive habitat for butterflies and insects, while helping to cut the costs of roadside mowing. Photograph: Eva Worobiec/Alamy

The process is simple: cut infrequently, ideally, just twice a year in spring and then late summer once plants have bloomed and seeded; remove the clippings to gradually reduce the fertility of the soil and prevent a buildup of mulch; repeat, wait, and enjoy the resurgent wildlife and flowers.

“It will not fail,” says Sterling, who, as programme manager for charity Butterfly Conservation’s building sites for butterflies project, has taken his roadside revolution around the country to any local authority that will listen. “As fertility declines in a soil, biodiversity increases. At first that seems a little counterintuitive because you imagine the more you pour into a soil, the more plants that can grow. That’s not how it works in the natural system. In more fertile systems, a few species dominate and they swamp and smother everything else.”

Wildflowers on roadsides are a haven for butterflies and insects. Photograph: Lincolnshire Wildlife Trust

Grass cuttings are almost always left where they fall along the thousands of miles of road verges that are maintained by law in the UK. Over time, the resulting mulch increases the fertility of the soil, meaning the grass grows with increasing vigour and needs to be cut more frequently. The cut and collect method breaks the cycle.

The before and after photos of otherwise ordinary roadsides across Dorset show the dramatic effects of Nicholson and Sterling’s maintenance regime, as suffocated seed banks have been allowed to spring back into life. Yarrow and yellow flashes of lady’s bedstraw punctuate roadsides and roundabouts throughout summer. Magenta pyramidal orchids linger outside a branch of Tesco.

The cost savings of managing roadsides this way are equally stunning for the council’s accounting department. The annual budget for highway verge management dropped from nearly £1m to £650k in five years under the cut and collect, low fertility approach. London boroughs, councils from across the country and European governments are paying attention.

“For the last 40 years we’ve been doing entirely the wrong thing,” says Sterling, impatient with the possibilities for roadsides across the UK and beyond.

Wildflower meadows, ancient British ecosystems that are crucial for wildlife, thrived for centuries with the help of traditional farming methods and livestock husbandry, but have largely vanished in the post-war era. Industrialised use of nitrogen fertilisers and poor land management have diminished the crucial wildlife habitat by 97% since the 1930s. But road verges have become an unlikely source of hope.

Last September, the wildlife charity Plantlife produced new guidelines for transforming the management of the UK’s roadsides that incorporate some of Nicholson and Sterling’s practices. Crucially, the plan to turn verges into wildlife corridors is also backed by the country’s highways authorities and construction and services businesses such as Kier and Skanska.

If adopted nationwide, an area the size of Nottinghamshire could see 700 species of wildflowers thriving along the road network in Great Britain, equivalent to around 40% of the government’s land restoration targets for 2040. A petition backing Plantlife’s campaign has more than 85,000 signatures.

“It’s about bringing colour back to the countryside and to our roadsides. If we have that colour there, then we’ll have lots of other wildlife there as well,” says Plantlife botanist Trevor Dines.

“Plants are the powerhouses of our food chains. They are the only things that are collecting energy from the sun and pumping it into the food chain. Without that diversity of plants there, you don’t get the diversity of other wildlife,” he adds.

One 4.5-mile stretch in Dorset shows what is possible: the Weymouth relief road. Opened in 2011 ahead of sailing events at the Olympics, the seven hectares (17 acres) of verges that line one of the busiest roads in the county have become a crucial site for biodiversity.

Yellow clusters of kidney vetch, the only wildflower where the small blue, Britain’s smallest butterfly, will lay its eggs, dominate the roadsides in the spring and summer. But the medicinal pea-like flowers, whose seeds can cost more than £2,000 a kilo from commercial providers, are not an extravagant token of the region’s Olympic legacy.

“I harvested the seeds for that myself,” says Sterling, recounting the painstaking task of growing enough kidney vetch at recycling centres and flood bunds since the early 90s. “Now look how much there is.”

Since the road opened, more than half of the species of butterfly known to inhabit Britain have been recorded on the grasslands lining the road, including the Adonis blue and Chalkhill blue. Sterling has 10kg of of kidney vetch seed ready in his office for when the Stonehenge tunnel gets approval .

“If you think about the species of butterfly that Weymouth relief road supports on seven hectares, what would it be like on a hundred hectares?” says Nicholson excitedly.

“There’s a huge opportunity here in the UK to change what we’ve currently got,” says Sterling. “We can put back much of what we’ve lost. It’s not impossible to do. We haven’t gone beyond that tipping point where there is so little left that there’s no point.

“If half the species of butterfly in the UK can turn up on a road verge created less than 10 years ago, then we do have the capabilities to do this, don’t we?”

But such enthusiasm for Britain’s wildflowers are not apparent everywhere. Opposite a burger van in a ditch near Ely lies one of England’s rarest plants, the only known native fenland ragwort plant.

The critically endangered wildflower, which is supposedly protected by being on a Site of Special Scientific Interest, is surrounded by faded McDonald’s packaging and beer tins. The plant was only discovered when a French botanist from a nearby Cambridge research centre identified it while relieving himself in a layby in the 1960s, so the story goes.

“It was the first sighting of fen ragwort since the mid to late 19th century, so getting on for 100 years, more or less,” says Tim Pankhurst, Plantlife’s conservation manager for the east of England, as lorries storm pass on the road that links Ely and Newmarket.

“That’s it for fen ragwort. This is the sole native site in Britain. A lonely roadside ditch at the back of a verge near Ely.”

The tall plant is a relic of how the fens, in Cambridgeshire, Lincolnshire and Norfolk, used to be: a vast expanse of marshland full of native birds and wildlife. Fen ragwort would have been torn up and moved around by flood waters, but since the region was drained in the 18th century, there’s now only one known native site. SOURCE 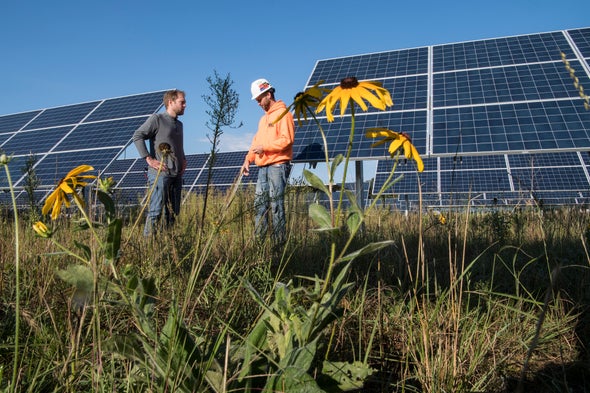