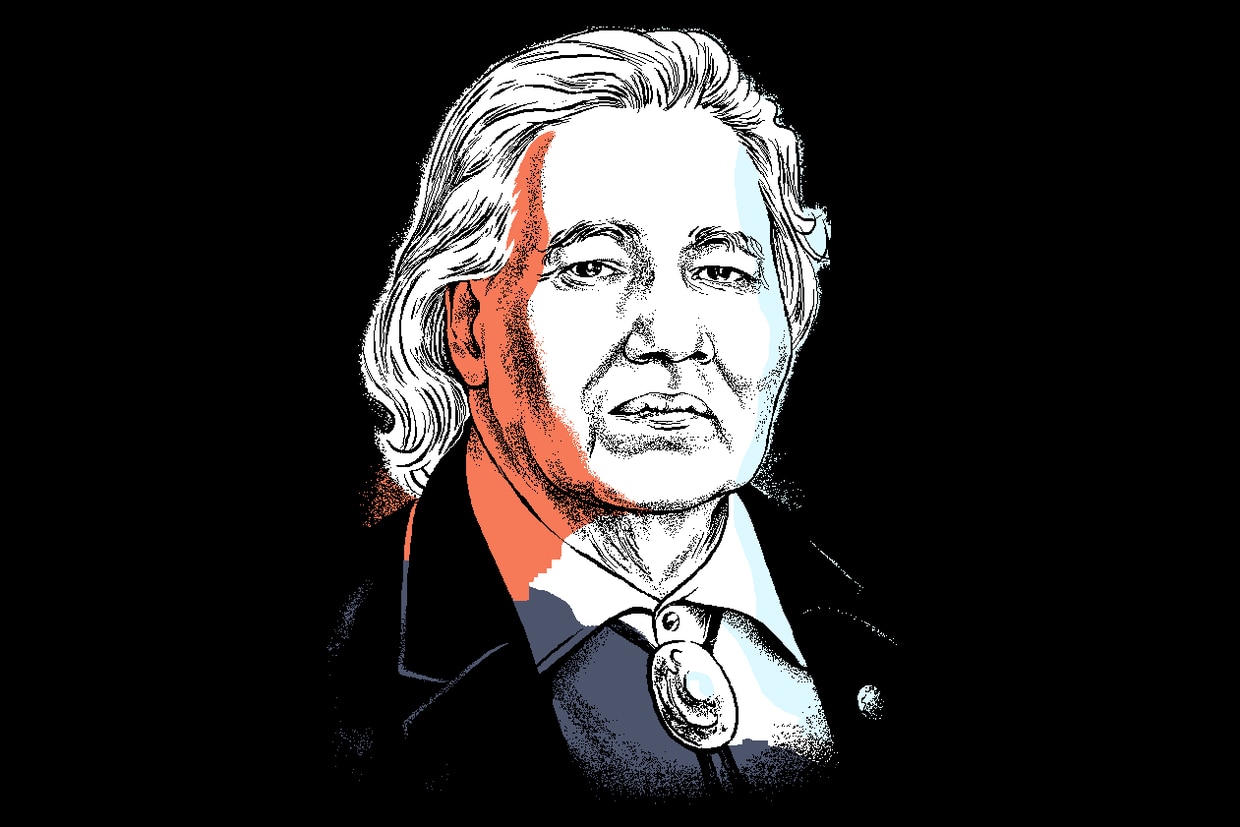 The words are so shocking, so evocative of foreign atrocities, that many Canadians are still unwilling to accept that they apply to their own country – words such as “apartheid,” “genocide” and “war.”

But after decades of research from his inquiries into racial abuses in the justice system and in residential schools, Senator Murray Sinclair never hesitates to use those terms – even when he knows they might spark a backlash.

“Sometimes the shock value is worth it,” he told The Globe and Mail.

“It’s about making people sit up and take notice. It’s about getting people out of their comfortable chair and getting them to think seriously about it.”

A strong case can be made that the 68-year-old independent senator and retired judge has done more than any other Canadian to educate the country about the painful realities that have dogged its history and institutions.

As chair of the Truth and Reconciliation Commission of Canada from 2009 to 2015, he documented the existence of cultural genocide in Canada’s residential schools. As a leader of justice and policing investigations in Manitoba and Thunder Bay, he exposed officials who were willfully ignoring racism in their police forces. And in his personal writing and speeches, Mr. Sinclair has hit even harder, describing a web of genocidal policies and apartheid laws that Canadian governments deployed in a “war” against Indigenous people – a war he says never really ended.

Although his formal inquiries have ended, his work is far from over. As he tirelessly follows a busy schedule of speeches across the country this year – including a recent one describing how Indigenous people were excluded from Confederation’s bargains – Mr. Sinclair continues to have an outsized influence in shaping Canada’s understanding of itself.

He sees himself as struggling to dismantle the legacy of a system that can be compared, in many ways, to the apartheid of South African history. Despite frequent hate messages on Twitter and Facebook, he continues to make that point on social media, shrugging off the anonymous attacks.

“There will be people who will always resist those statements,” he said in a two-hour interview in his Winnipeg office, symbolically located on an “urban reserve” under the authority of the Peguis First Nation.

“If you say that there’s been racism by white people against Indigenous people historically, you run the risk of white people standing up and saying, ‘No, we’re not racist.’ But if the evidence is there to support your position, you will also garner a level of support among the non-Indigenous population who will say, ‘Yes, we acknowledge it, so let’s get on with it.’”

His inquiries, beginning with the pioneering Aboriginal Justice Inquiry of Manitoba in the late 1980s, were prompted by tragedies and injustices: the deaths of young Indigenous people in Manitoba and Thunder Bay and in residential schools, neglected by the police and the courts and never properly investigated.

But from those tragedies, Mr. Sinclair found lessons that have shifted Canada’s public debates.

When he was appointed associate chief judge of the Provincial Court of Manitoba in 1988, he became the province’s first Indigenous judge and only the second in Canada. Within weeks, he was immersed in a hugely complex inquiry into the discrimination faced by Indigenous people in the province’s justice system. His relentless work to expose the barriers that hold back Indigenous people – and to find solutions – has scarcely paused in the three decades since then.

In interviews, he chooses his words carefully, speaking in calm and measured tones, even when his anger at historical abuses is clear. In speeches, he uses gentle humour and warm stories of his own family to make his points.

His goal is to reach Canadians who are open to learning about the country’s history – to give them “the sense that now they can talk about it, too.

Organic farmer Brenda Hsueh introduces the Green New Deal to people in her barn at Black Sheep Farm outside of Scone. PAT CARSON

The United Nations Secretary General Antonio Guterres does not talk about climate change, he talks about a “climate crisis,” adding that “we face a direct existential threat.”

The Paris Agreement on climate was signed by 195 nations, including Canada, in 2017. On April 2, 2019 the Government of Canada announced in a news release that Canada’s climate is warming twice as fast as the global average. The report added that Canadians are experiencing the costs of climate-related extremes first hand, from devastating wildfires and flooding to heat waves and droughts.

In January of 2019, the Canadian Public Health Association (CPHA) reported that climate change is linked to depression, anxiety and stress disorders in Canada.

There have been more than 150 Green New Deal town hall gatherings across Canada this month alone, in cities like Toronto and Vancouver and smaller communities like Barrie and Wiarton. On May 25 there was one in a barn on a farm outside of Scone on Grey Road 3.

“In part it comes out of the LEAP manifesto and a lot of different progressive groups wanting to push society to make changes, not just on climate issues, but on social justice issues too,” explained Brenda Hsueh, an organic farmer who hosted the event at Black Sheep Farm.

Hsueh decided to take up the challenge of hosting a town hall because as an organic farmer most of her work is done in isolation and she wanted to see who else in her community was as angry and frustrated with society’s lack of action on this major issue.

Twenty-four people from different walks of life and different ages, including several local organic farmers, showed up as concerned as Hsueh about the climate crisis and the need for action now.

The Green New Deal calls on workers, students, union members, migrants, community organizations and people all across the country to gather and design a plan for a safe and prosperous future for all. It is a vision of rapid, inclusive and far-reaching transition, to slash emissions, protect critical biodiversity and meet the demands of the multiple crises.

In her opening remarks, Hsueh asked people to be “mindful that we are gathered today on the traditional land of the Three Fire Confederacy of the Ojibway, Potawatomi and Odawa people.”

Before beginning small group discussions she explained the concept of “green line” statements as a way to identify what people want to see and support in communities and the country. “Red line” statements identify what people do not want to see or support. The statements might be about labour, Indigenous peoples, food, disabilities, public transportation, health, agriculture, war, youth and faith to name just a few social justice topics. MORE

When released into the atmosphere CO2 remains active for 100 years. Forests on which the carbon offsets are based, rarely remain intact for that long.

Photography by Fernando Martinho, for ProPublic

RIO BRANCO, BRAZIL — The state of Acre, on the western edge of Brazil, is so remote, there’s a national joke that it doesn’t exist. But for geochemist Foster Brown, it’s the center of the universe, a place that could help save the world.

“This is an example of hope,” he said, as we stood behind his office at the Federal University of Acre, a tropical campus carved into the Amazon rainforest. Brown placed his hand on a spindly trunk, ordering me to follow his lead. “There is a flow of water going up that stem, and there is a flow of sap coming down, and when it comes down it has carbon compounds,” he said. “Do you feel that?”

I couldn’t feel a thing. But that invisible process holds the key to a massive flow of cash into Brazil and an equally pivotal opportunity for countries trying to head off climate change without throwing their economies into turmoil. If the carbon in these trees could be quantified, then Acre could sell credits to polluters emitting clouds of CO₂. Whatever they release theoretically would be offset, or canceled out, by the rainforest.

Five thousand miles away in California, politicians, scientists, oil tycoons and tree huggers are bursting with excitement over the idea. The state is the second-largest carbon polluter in America, and its oil and gas industry emits about 50 million metric tons of CO₂ a year. What if Chevron or Shell or Phillips 66 could offset some of their damage by paying Brazil not to cut down trees?

The appetite is global. For the airline industry and industrialized nations in the Paris climate accord, offsets could be a cheap alternative to actually reducing fossil fuel use.

But the desperate hunger for these carbon credit plans appears to have blinded many of their advocates to the mounting pile of evidence that they haven’t — and won’t — deliver the climate benefit they promise.  MORE