Ridiculed for their lies and bumbling, Jason Kenney’s propagandists soldier on. 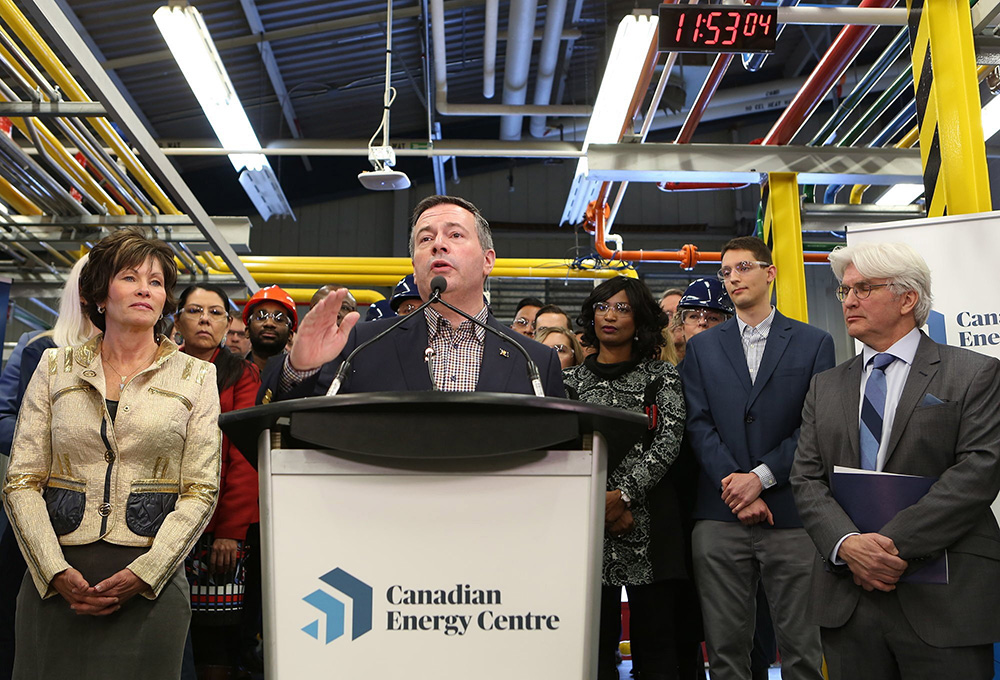 Jason Kenney is learning that it’s not easy to set up a state-run propaganda agency.

Right off the bat, the Alberta premier’s “war room” swore, as every propaganda outfit does, that it would “reject what is false and promote what is true.”

The agency, officially named the Canadian Energy Centre and launched earlier this month with an annual budget of $30 million, picked one of its first battles with the Medicine Hat News.

That newspaper’s crime was to publish an opinion piece by Jeremy Appel that lambasted the agency’s motives: “Its entire premise is based on the notion that anyone who opposes oilsands expansion is a liar with ulterior motives.”

Appel called the war room “an expensive joke” and “a grave threat to our right to dissent.”

And he criticized Kenney for arguing, just like the extremist Ezra Levant, that the province needed a propaganda agency because Canadian oil is more ethical than Saudi or Russian oil.

“Are Albertans supposed to pat themselves on the back because they don’t jail and execute dissidents, but merely dedicate public resources to their vilification and harassment without a shred of transparency?”

Appel’s column proved something that George Orwell once wrote: that “if liberty means anything at all it means the right to tell people what they do not want to hear.”

And so, the CEC immediately swung into action. Grady Semmens, a CEC agent and former Trans Canada PR guy, sent the paper a note saying it wanted to respond to the “comments and inaccuracies” in Appel’s column. (For the record, Semmens describes himself as “a purpose-driven public affairs professional.”)

The subsequent “guest column” makes no mention of any “inaccuracies” but swears the propaganda outfit will be “informative, positive and educational.”

But how can a group staffed largely by conservative partisans or hydrocarbon fundamentalists be anything but ideological, political and false?

It starts at the top. Tom Olsen, CEC’s managing director, used to serve as the press secretary for Tory premier Ed Stelmach and was a failed United Conservative Party candidate in the last election. (Count Olsen as at least one Albertan put back to work by Kenney.)

Olsen and his indoctrinators, employing the Orwellian technique of inventing an enemy, pretend to be fighting a war against a foreign-funded, anti-oilsands campaign that largely ended four years ago. As Olsen blared, his agency “is a direct response to the domestic and foreign-funded campaigns against Canada’s oil and gas industry that have divided Canadians and devastated the Alberta economy as energy production in the United States and elsewhere has ramped up.”

Apparently Olsen has no knowledge of the 2014 oil price collapse, or other well-documented factors hurting his province’s petro-prospects.

And he apparently also forgot that years ago, four oilsands executives sat down with five environmental groups involved in the anti-tarsands campaign led by Tzeporah Berman. In backrooms, they all agreed to a half-assed plan to limit emissions as opposed to production, which, rightly or wrongly, largely derailed the campaign.

The NDP government later joined in the climate policy agreement, leading to a splashy announcement in November 2015.

Retiring Suncor executive Steve Williams confirmed the war’s end in an interview in the Calgary Herald last year: “If you look at the vigour of the off-oilsands campaign, it hasn’t been there. You’ve seen projects approved, you’ve seen Fort Hills built and started up.”

Still, no good propagandist discards a deflated enemy when falsely pumping one up better serves his purpose. Fighting a battle that has largely ended is surely good work if you can get it. MORE

Imagine living in a place where liberalism and democracy have dissipated, and given way to authoritarian government. Imagine a jurisdiction where open discussion is out of the question and debate unworthy. Imagine the state sees enemies — identified as liars or worse — and decides they must be defeated using all means possible.

This is the portrait right-wing German political theorist Carl Schmitt presented in The Concept of the Political, a 1932 pre-Nazi treatise where he categorized politics as a combat to the finish between friends and enemies.

Those on the same side — “friends” — had to recognize that their actual and potential adversaries on the other side were actually enemies and not just opponents with differing views of the good.

Seeing the world as a coalition of our friends versus collective public enemies — and then dismissing attempts to reconcile conflicting views as a utopian waste of time — is what autocrats, false populists, dictators, tyrants, and intolerant right-wing regimes have in common.

Now think of Alberta, where Jason Kenney and his United Conservative Party (UCP) generate fear and anger ranting about imagined enemies of Alberta.

In a video, former prime minister Stephen Harper welcomed delegates to the UCP second AGM, running from November 29 to December 1. Harper vilified the outgoing NDP government as having “empowered those who wanted to see this great engine of Canada’s economy fail, and capitulated to a Liberal government in Ottawa that put roadblocks against our Alberta economy.”

In the hostile world imagined by Harper and Kenney internal enemies include the “Liberal” mayor of Calgary as Kenney calls Naheed Nenshi, as well as NDP opposition leader Rachel Notley.

The UCP regime fired the elections commissioner investigating UCP electoral corruption, who had already dished out $200,000 in fines to UCP candidates, and had still to report on the corruption surrounding the Kenney UCP leadership campaign.

On camera during the 2019 Alberta election campaign, Kenney signed a giant pledge to support public health care, and has now brought in measures to fire 750 nurses and other frontline workers — overall 5,900 public servants this year — with thousands more job losses to follow.

Kenney ignores union contracts, has seized control of public sector pensions, and fires workers, because unionized workers are public enemies for him and his party.

City of Edmonton councillors talk about how 2,000 jobs will need to be cut because Kenney abolished the city charter financing arrangement. Calgary also had its charter financing revoked and has already announced 250 departures.

Outside enemies are plentiful and vary according to the humours of the premier. Prominent are the Ottawa Liberal government that bought a pipeline to assure continued access of Alberta diluted bitumen to the West Coast; Quebec which approved the reversal of Enbridge Line 9 so that now 50 per cent of its imported crude oil comes from Alberta; B.C. (home since 1953 to the Trans Mountain pipeline built by B.C. Hydro) which has an ocean coast line and precious marine life it is determined to protect; and Canadian environmentalists opposed to climate change.

An Alberta Federation of Labour study estimates that the Kenney budget cuts just introduced will kill more jobs than the oil price collapse of 2014-16 and create a Kenney recession. These spending reductions are estimated by economist Mel McMillan to be nearly 15 per cent over the next four years, after accounting for population growth and price inflation.

Premier Kenney’s approval rating in Alberta has fallen from 60 per cent in September to 42 per cent at the end of November, according to polling done by Leger Marketing.

Once Albertans discover that the UCP finance minister was wrong to describe economic diversification is a “luxury”; that the tax credits for film production and tech expansion created jobs and should not have been eliminated; that Kenney’s $4.7-billion corporate tax cut has not stopped energy companies from laying off employees; that Energy Efficiency Alberta had generated $850 million of business in the two years before the UCP shut it down; and that cuts to health, education, and public university funding impact daily lives in every way — expect approval ratings to decline even further.

In the meantime the temptation to proceed against Kenney and the UCP as the enemy needs to be resisted, hard as that may be given his program will increase the incidence of mental illness, and that for many, it threatens psychological as well as physical well-being.

Emotionally fuelled partisan rhetoric puts citizens off, distracts from bringing forward what matters to people, and plays into the government’s hand.

Documenting and laying out what is going wrong, and addressing the issues facing Albertans is a better strategy for civil society, and, especially, the official opposition NDP. SOURCE