“ Tell those police forces to turn around and face the other way and stand on guard to protect the rights it promised to respect.” —Murray Sinclair 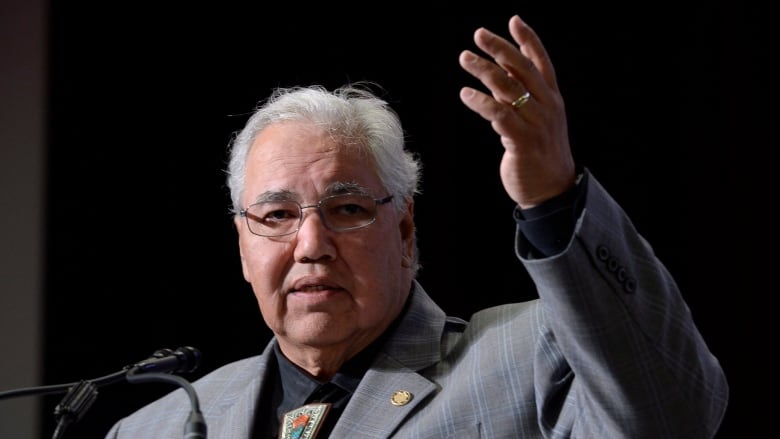 Senator Murray Sinclair: “Indigenous land sovereignty is a term you rarely heard in law school when I attended in the 70s, and that continues today.”

I have been giving some thought to the conflicts that arise whenever pipeline expansion or developments occur in a manner that affects Indigenous people and their territories.

One of the major issues centers on the use of police forces to enforce court orders.

The police decision to view Indigenous resistance to corporate encroachment on their lands, especially in the face of court orders, as acts of terrorism, almost automatically results in a decision by police to see the need to take military-type action to overcome Indigenous protests. Such a heavy handed approach violates the need for this country to come to terms with its historical ignorance of and attitude toward the territorial rights of Indigenous peoples that stem from the racist doctrines of discovery and terra nullius.

Such police tactics seem to enjoy a measure of acceptability on the basis that the public are told that people are wrongfully disobeying a court order and should not be allowed to get away with it. Yet even when there is no such order and there is such police behaviour, the level of public denunciation seems muted. Case in point include the police tactics during the G20  Summit in Toronto in 2010.

Legal education is still weak in the area of conflict over Indigenous rights. Courts still see pipeline expansion and corporate development in Indigenous territory as a property issue and not a question of sovereignty, often because that is the way it is originally presented to the courts by corporate lawyers seeking interim injunctions. Judges are either incapable of, or unwilling to, say, “Just hold on here, what about the sovereign rights of the Indigenous people over whose lands you want to do this?”  No one brought such an application before me when I was a judge (we didn’t get a lot of them in Manitoba) but if they had, I would have asked that question.

Indigenous land sovereignty is a term you rarely heard in law school when I attended in the 70s, and that continues today. What’s even more concerning is that it is not discussed in law schools or legal circles as one of the major unresolved legal issues of the day, and on what basis it might be or should be resolved. When it is discussed in courts, generally, it suffers from a weak grasp of the theoretical basis for Indigenous rights as sovereign rights and lapses into an argument over property. We still have a long way to go.

The Royal Proclamation of 1763 recognizes the sovereign and territorial rights of Indigenous people including the right not be disturbed therein or to lose those rights without consent. Courts have been reluctant to see the Proclamation as being protective of Indigenous territory where treaties do not exist and rights have not been ceded. Yet the Royal Proclamation remains as a part of the Constitution of this country. It stands alone and is not part of the “existing” limitation found in Section 35 of the Constitution Act 1982. The Federal Government’s enhanced power position and fiduciary responsibility requires it to defend those principles. I am personally disturbed at the state’s willingness to use police to enforce the property rights of corporations against the unceded sovereign rights of Indigenous people, even in the face of a court order.

They should be telling those police forces to turn around and face the other way and stand on guard to protect the rights it promised to respect. SOURCE