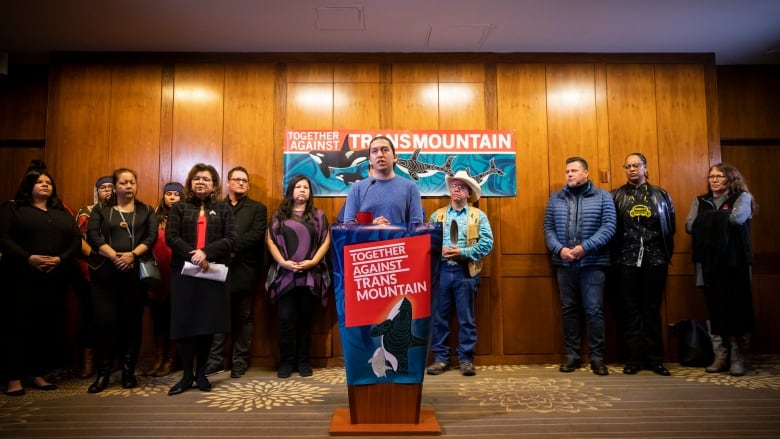 Khelsilem of the Squamish Nation holds a news conference with four British Columbia First Nations groups challenging the re-approval of the Trans Mountain pipeline in Vancouver on Monday. (Ben Nelms/CBC)

Several B.C. First Nations are squaring off against the federal government in the Federal Court of Appeal in Vancouver this week, arguing that it failed to conduct meaningful consultations with them about the Trans Mountain pipeline expansion and that the project should be cancelled.

The case is similar to the previous Federal Court of Appeal case that quashed the approval of the pipeline expansion in August 2018 except it is focused on the specific window of time when the federal government revisited its duty to consult with First Nations before approving the project once again in June of this year.

“Canada has repeated many of the errors that led to the original quashing of the pipeline, and in some ways, consultation was worse than the first time around,” said Leah George-Wilson, elected chief of the Tsleil-Waututh Nation at a news conference on Monday.

“Today, we argue that the federal government’s approval of the pipeline is unlawful and must be quashed. Our experience is that consultation fell well short of the mark.”

The Tsleil-Waututh Nation, Squamish Nation, Coldwater Indian Band and a collective of Stó:lō bands will be making arguments about why they believe the renewed consultation efforts fell short in each of their specific communities.

The Crown-corporation-owned expansion project would twin an existing 1,150-kilometre pipeline that extends from Edmonton to Burnaby, B.C., nearly tripling its capacity to move oil from Alberta to coastal B.C., and then to markets in Asia. The cost has been estimated to be between $7.4 billion and $9.3 billion.

Tsleil-Waututh’s legal team was first to present arguments in court on Monday morning, in a packed courtroom with more than two dozen lawyers, community members and media.

Scott Smith, one of the litigators on Tsleil-Waututh’s legal team, said Ottawa refused to budge on issues of concern to the First Nation, “or change its position because it was unilaterally focused on re-approving this project.” 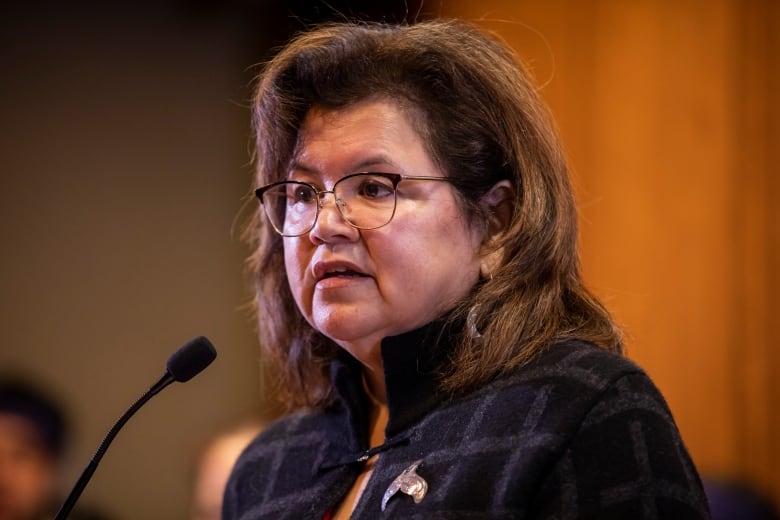 Chief Leah George-Wilson of the Tsleil-Waututh Nation speaks at a news conference alongside other First Nations groups that are challenging the re-approval of the Trans Mountain pipeline. (Ben Nelms/CBC)

Tsleil-Waututh’s main concerns about an expanded Trans Mountain pipeline include an increase in tanker traffic in Burrard Inlet; the effect a potential spill of diluted bitumen could have in the inlet and the Fraser River estuary; and the capacity to recover bitumen from such a spill.

The First Nation is also concerned about the impact of increased marine traffic on the southern resident killer whales and argued in court that the federal government prematurely re-approved the expansion before conducting further research necessary to assess that impact.

The federal government’s duty to consult stems from Section 35 of the Constitution, which recognizes Aboriginal and treaty rights. Over decades, court rulings have been defining what Indigenous rights look like and under what circumstances the government can make a decision that infringes on those rights.

The degree of consultation required and the accommodations that may need to be considered depend on the project under consideration and the level of potential impacts on a specific community.

Khelsilem, elected councillor and spokesperson for the Squamish Nation, said at the news conference the court case is about fighting the “substandard” level of consultation his nation saw from the federal government.

“The Squamish nation is committed to building a community, a territory, that is clean and that is prosperous. Not just for our people but all the people that now live in our territory,” he said.

“An expanded pipeline export facility within our territory and within this part of the world does not make sense given the risks that it would pose and the lack of meaningful respect for the rights of the Squamish people.”

The initial Federal Court of Appeal ruling in August 2018 stated that some of the federal government consultation work was adequate but found “at the last stage of the consultation process prior to the decision of the Governor in Council … Canada’s efforts fell well short of the mark set by the Supreme Court of Canada.” 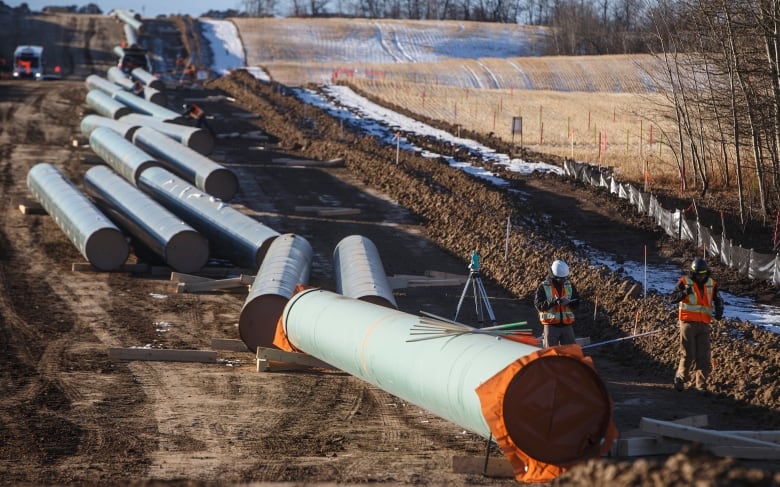 Workers survey around pipe to start of right-of-way construction for the Trans Mountain Expansion Project, in Acheson, Alta., on Dec. 3. The expansion project would twin an existing 1,150-kilometre pipeline, nearly tripling its capacity to move oil from Alberta to coastal B.C., and then to markets in Asia. (Jason Franson/The Canadian Press)

As a result of this ruling, the federal government was forced to revisit that last stage of consultation and tasked retired Supreme Court justice Frank Iacobucci with overseeing that work.

Over the next three days, several parties will be making arguments to the court: four First Nations groups, the federal government, Trans Mountain and several interveners. Proceedings will be livestreamed via the court website.

Upper Nicola and Stk’emlupsemc te Secwepemc, two of the six nations initially approved to proceed with arguments before the court, have since dropped out after signing agreements with Trans Mountain. 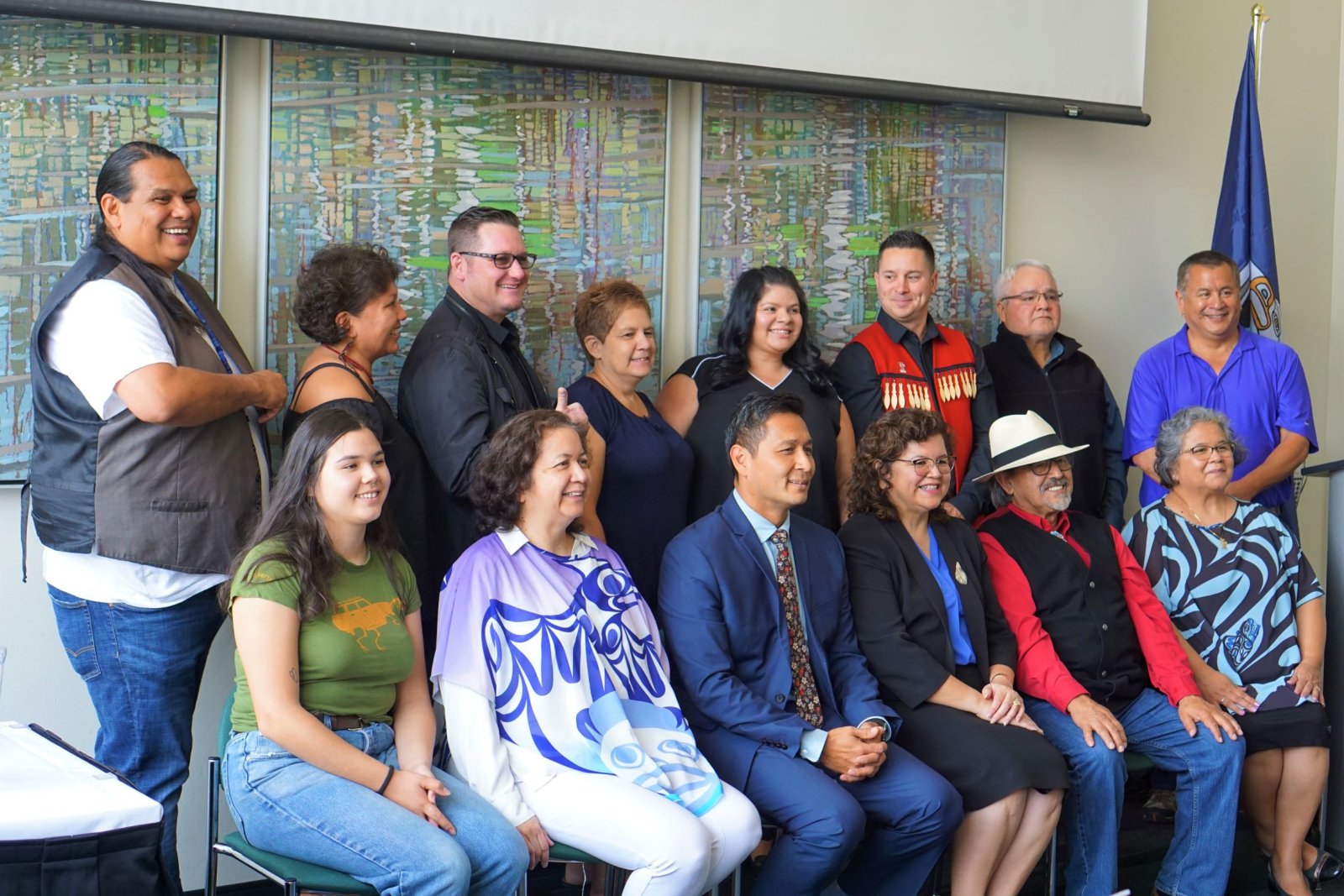 First Nations have taken their first step to bring the federal government back to court over its approval of the Trans Mountain expansion project.

Chief Leah George-Wilson of Tsleil-Waututh Nation said Canada was “not responsive” to concerns that came up during the consultation process, including those relating to the risks and costs of an oil spill, the impacts on southern resident killer whales and encroaching on Indigenous rights and title.

“Tsleil-Waututh participated in the consultation in good faith, again. But it was clear that Canada had already made up their mind as the owners of the project,” she said. “We have no choice but to appeal again, and we expect the same result: that the approval will be overturned.”

The nation will also argue that the government’s $4.5-billion purchase of the west coast pipeline system created a conflict of interest.

“Canada is biased. The federal government is in a conflict of interest as the owner, the regulator and enforcer, as well as the fiduciary for First Nations,” George-Wilson said.

Under Canada’s Constitution, federal government has a legal duty to consult First Nations on decisions that could affect their rights or way of life. But the Trudeau government failed to do this the last time it tried to approve the pipeline in November 2016.

As National Observer reported in April 2018, government insiders say senior public servants privately ordered them to find a way to approve the project before Trudeau announced his decision, despite telling Indigenous leaders the government was still consulting them. MORE