A proposed copper and gold mine has been rejected twice by the federal government for its impacts on Fish Lake, an area considered sacred by the Tsilhqot’in. But B.C.’s mining laws allow the company to move ahead with exploration work anyway. That doesn’t square with Tsilhqot’in law and the community says it won’t back down

Xeni Gwet’in Chief Jimmy Lulua sits in a pit house built as part of the Xeni Gwet’in traditional village near the shores of Chilko Lake in the Nemiah Valley. Photo: Louis Bockner / The Narwhal

The brand-new, 21-foot Highfield boat, bought by Xeni Gwet’in First Nation to enforce Tsilhqot’in laws on Chilko Lake, docks at the pebble beach on a small island and Chief Jimmy Lulua dives in.

Where the road through the Nemiah Valley in Tsilhqot’in territory ends, Chilko Lake begins. The mountains that rise from its shores offer a stark contrast to the open landscape of the Xeni Gwet’in traditional territory. Photo: Louis Bockner / The Narwhal

A quick dry-off and Lulua is ready to give a history lesson.

“We have always owned this land. Everywhere you look belongs to us. The land is who we are as Tsilhqot’in people. We say we are people of the river, people of the blue water,” he said.

“This is not B.C., this is not Canada. The jurisdiction is ours,” he said.

Chief Jimmy Lulua of the Xeni Gwet’in was elected in a 2018 landslide victory and is continuing the band’s decades-long fight against Taseko Mines’ proposed New Prosperity Mine at Fish Lake. Photo: Louis Bockner / The Narwhal

Neither is it the Wild West, Lulua emphasized and, as Tsilhqot’in communities master the complexities of writing laws and generating revenue, they are also figuring out how to control activities in a vast territory that, for the first time in Canadian history, has been legally acknowledged as belonging to Indigenous people who have used the land for thousands of years.

In a precedent-setting 2014 decision, the Supreme Court of Canada unanimously ruled that the Tsilhqot’in Nation held Aboriginal title to almost 1,800 kilometres of land in central B.C., southwest of Williams Lake. The title land covers the Nemiah Valley and stretches north into the Brittany Triangle, along the Chilko River and part of Chilko Lake. That means the Tsilhqot’in Nation, made up of six communities including Xeni Gwet’in, has the right to exclusive use and control of the land.

In 2014 the Tsilhqot’in won a 25-year legal battle when the Supreme Court of Canada ruled the nation held Aboriginal title to almost 1,800 kilometres of land in central B.C. A larger area has been legally declared as a place where Tsilqot’in have rights to hunt, trap, fish and trade. Taseko Mines’ proposed New Prosperity mine is within this larger rights area, and also within an area the Tsilqot’in delcared as a tribal park in 2014. Map: Dezine Studio / The Narwhal

A larger area claimed by the First Nation, including Dasiqox Tribal Park, has been legally declared as Tsilhqot’in rights land, giving the right to hunt, trap, fish and trade. But, it remains a grey area where rules can be unclear.

The rights land includes Fish Lake, known as Teztan Biny, an area of profound cultural and spiritual significance, and ground zero for an almost 30-year fight against Taseko Mines Ltd.. That fight is reigniting as the mining company pushes to conduct extensive explorations while the Tsilhqot’in Nation remains adamant that Taseko equipment will not be allowed into the territory. MORE 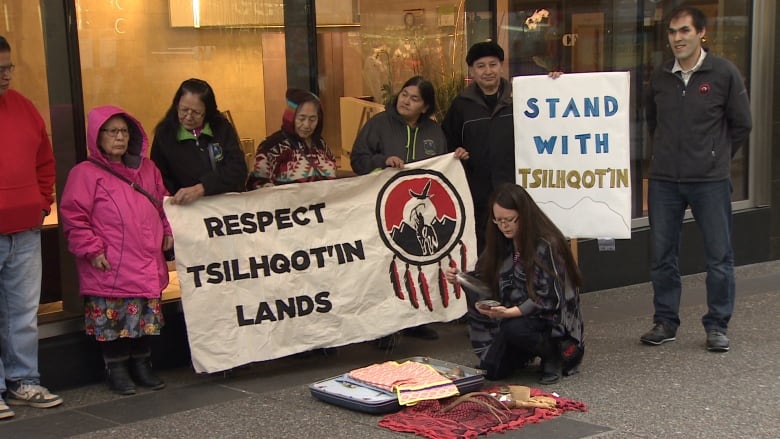 First Nations protest Taseko Mines outside of federal court in Vancouver in 2017. (CBC)