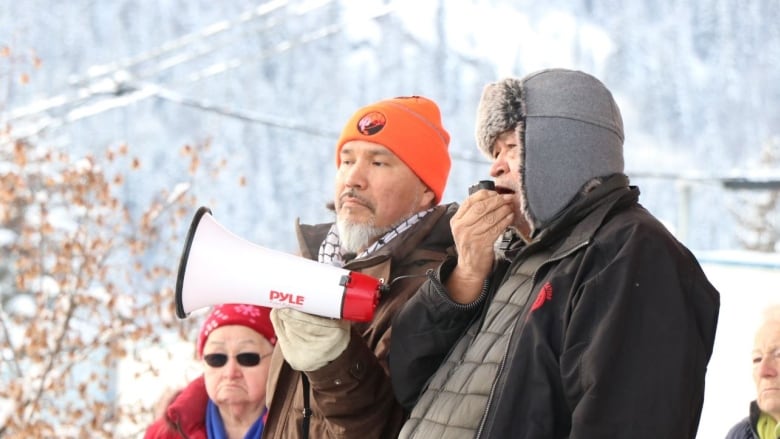 The Unist’ot’en camp is one of two set up by members of the Wet’suwet’en Nation to prevent TransCanada Corp from gaining access to the road near Houston, B.C. (Chantelle Bellrichard/CBC)

It remained to be seen Wednesday how the RCMP would enforce a court injunction that would grant the Coastal GasLink natural gas pipeline project access to a road and bridge near Houston, B.C., that have been blocked by opponents of the project from the Wet’suwet’en Nation.

The Unist’ot’en camp is one of two set up by members of the Wet’suwet’en Nation to prevent TransCanada Corp., which owns Coastal GasLink, from gaining access to the forest road in northern B.C., about 300 kilometres west of Prince George.

The proposed Coastal GasLink pipeline is meant to transport natural gas from northeastern B.C. to the coast, where a liquefied natural gas project is scheduled for construction.

On Monday, RCMP entered the fortified checkpoint at the Gidimt’en camp on the forest service road to enforce the injunction, granted in December, ordering people to stop preventing workers from gaining access. Fourteen people were arrested.

Members of the Wet’suwet’en Nation established the camps with fortified checkpoints, saying Coastal GasLink workers can only pass if they have consent from hereditary leaders. 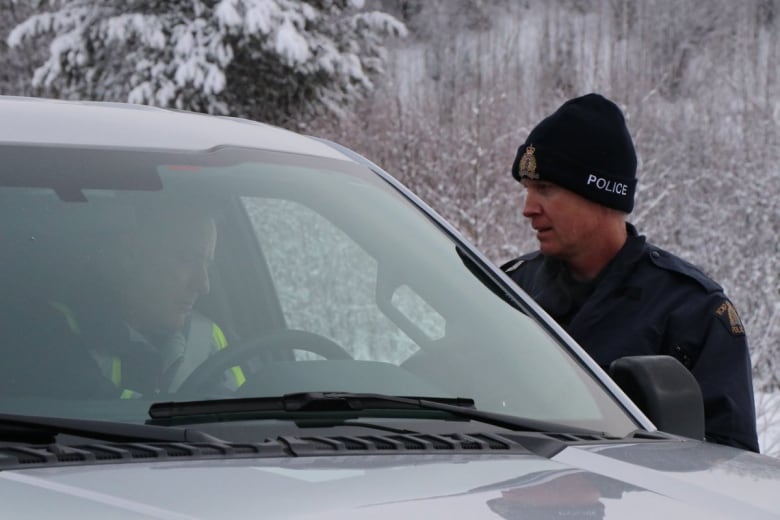 An RCMP officer speaks with a driver at the ‘exclusion zone’ police have set up on a forest road near Houston, B.C., as they enforce an injunction allowing pipeline workers access past Wet’suwet’en checkpoints. Mounties were headed to a second camp Tuesday. (Chantelle Bellrichard/CBC)

TransCanada, now known as TC Energy, said it signed agreements with all First Nations along the proposed pipeline route to the $40-billion LNG Canada facility being built in Kitimat, B.C., but some hereditary chiefs say those agreements don’t apply to the traditional territories.

RCMP Cpl. Madonna Saunderson said the people arrested on Monday were brought to the Houston detachment.

“Any of those who were arrested in violation of the injunction or any of the orders in the injunction have to be taken before the justice who issued the injunction, which happens to be in Prince George,” she said.

She said she did not know when that would happen.

About a dozen Unist’ot’en supporters gathered in front of the Prince George courthouse Tuesday.

Watch footage from outside the courthouse: 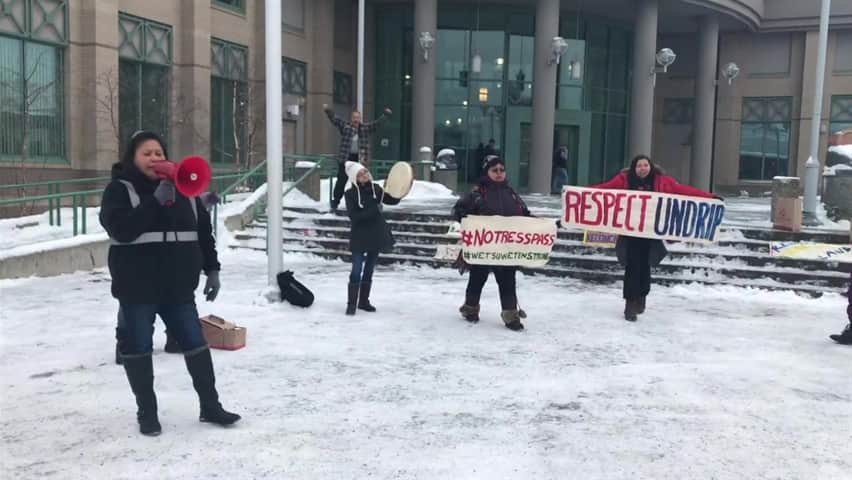 Some people who weren’t arrested Monday at Gidimt’en retreated to the Unist’ot’en camp. It was established in 2010 in a remote part of the Wet’suwet’en​ Nation’s traditional territory.

Media are not being permitted to pass the RCMP exclusion zone established on the forest service road at the 27 kilometre mark.

This is as far as we could get today. Police exclusion zone still at the 27km mark of the road. RCMP chopper took off while we were there. A few people on site at a fire. #unistoten 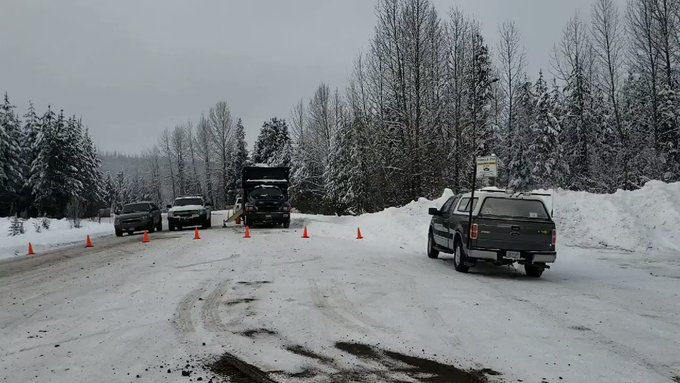 Witnesses at the RCMP checkpoint said they saw several RCMP vehicles heading in to the area Tuesday morning and other unmarked vehicles were seen getting through as well. A helicopter was seen taking off and heading out over the area.
At least two journalists remain with the group at Unist’ot’en​ and reported along with members at the camp that an RCMP helicopter was seen flying overhead Tuesday.

Hereditary Chief Namoks spoke at a rally held in nearby Smithers, B.C., Tuesday in support of the Unist’ot’en camp. He and other leaders have been meeting with RCMP and he said police want to bring in people from the Assembly of First Nations and the Union of British

“They need to build trust with us,” he said.

“We have no trust right now. We understand the RCMP was doing what they were ordered to do. I don’t hold animosity against any human being but I do have an issue when industry is steering a government which orders the RCMP to do what they did to our people yesterday.”

Rallies were held across Canada on Tuesday in support of the Wet’suwet’en camps. 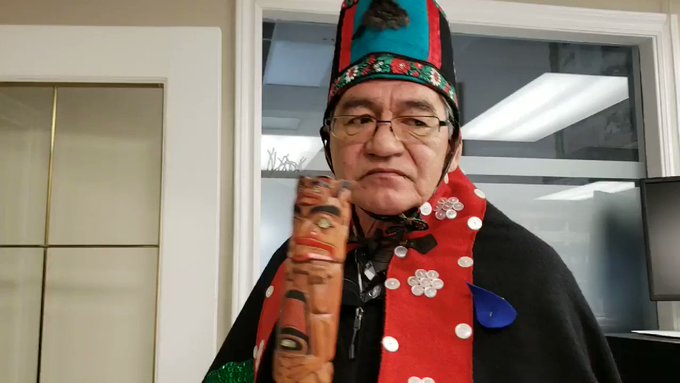 In an open letter posted on the company’s website, he wrote it was “unfortunate the RCMP were forced to take this action.” 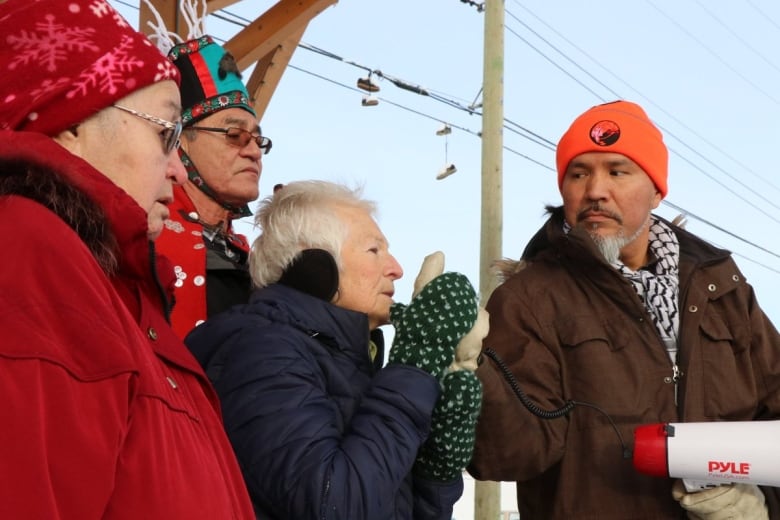 Elder Carmen Nikal speaks at a rally in Smithers, B.C., Tuesday. She was among 14 people arrested Monday at the Gidimt’en camp for defying an injunction. She was released overnight but the others were held in custody. (Chantelle Bellrichard/CBC)

“We took legal action as a last resort and only after six years of unsuccessful efforts to find a mutual solution,” the letter reads in part.

“We respect the rights of individuals to peacefully express their point of view, as long as their activities do not disrupt or jeopardize the safety of the public, our employees, our contractors, and even themselves.”

Murray Rankin, MP for Victoria, also posted an open letter on the NDP website, writing that the party is calling on the prime minister “to engage immediately with the Wet’suwet’sen and demonstrate his commitment to real and meaningful reconciliation.”

“If Prime Minister Trudeau is serious about his commitments to Indigenous Peoples, he needs to help facilitate a peaceful resolution that respects the rights of the Wet’suwet’en First Nation,” Rankin wrote. SOURCE 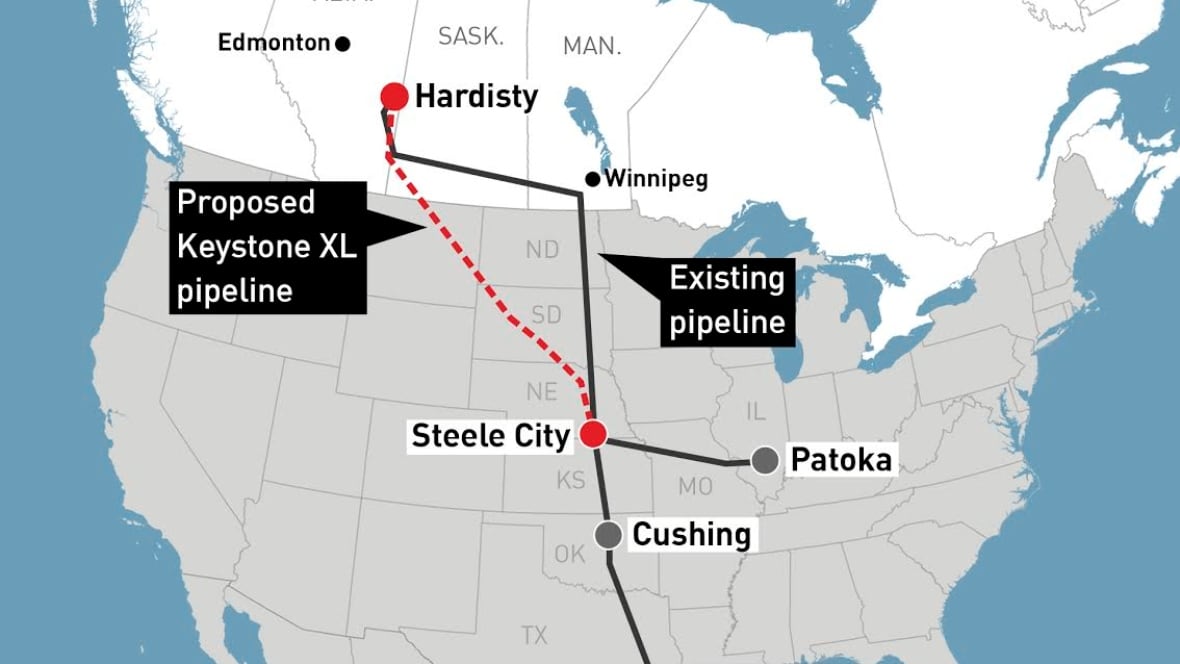 The U.S. District Court for the District of Montana ruled in November that the Trump administration violated bedrock U.S. environmental laws when approving a federal permit for the pipeline. The ruling blocked any construction while the government revises its environmental review.

Today, the court largely stood by that ruling, finding that TransCanada is unlikely to succeed on its appeal to the Ninth Circuit Court of Appeals. It also ruled that TransCanada remains blocked from constructing worker camps and conducting most other pre-construction activity along the pipeline route. The court did allow TransCanada to store pipe in storage yards located off the pipeline right of way, but only on private land that has been properly surveyed and analyzed. The court noted that any investment of resources would be at the company’s own peril. MORE

If TransCanada doesn’t like it, they can go around Wet’suwet’en Territory

I am appalled at the government of B.C. regarding both its insistence on pressing forward with hydraulic fracturing at this time of climate crisis and with its clear choosing of offensive, disrespectful and contemptuous actions to the Wet’suwet’en Nation to accomplish this goal.

Provincial and federal levels of government knew that the hereditary chiefs of the Wet’suwet’en are the title holders of that land. They had an obligation to inform TransCanada of this and to deal with the proper title holders of the land involved. If TransCanada doesn’t like it, they can go around Wet’suwet’en Territory or reinvest in some activity that might have a chance of getting us out of some of the many crises we currently face on our planet.

I am appalled at the government of B.C. regarding both its insistence on pressing forward with hydraulic fracturing at this time of climate crisis and with its clear choosing of offensive, disrespectful and contemptuous actions to the Wet’suwet’en Nation to accomplish this goal.

Provincial and federal levels of government knew that the hereditary chiefs of the Wet’suwet’en are the title holders of that land. They had an obligation to inform TransCanada of this and to deal with the proper title holders of the land involved. If TransCanada doesn’t like it, they can go around Wet’suwet’en Territory or reinvest in some activity that might have a chance of getting us out of some of the many crises we currently face on our planet. MORE When TransCanada attempts to deliver a Canadian court injunction against a decade-old Wet’suwet’en checkpoint, they run into a second checkpoint instead. The Wet’suwet’en people have never signed treaties with Canada or sold their lands, a fact confirmed by Canada’s Supreme Court in 1997 in a landmark case known as Delgamuukw.