Tyee readers asked us to report on how to transition to a green economy without lost jobs. Here are some answers for one region. 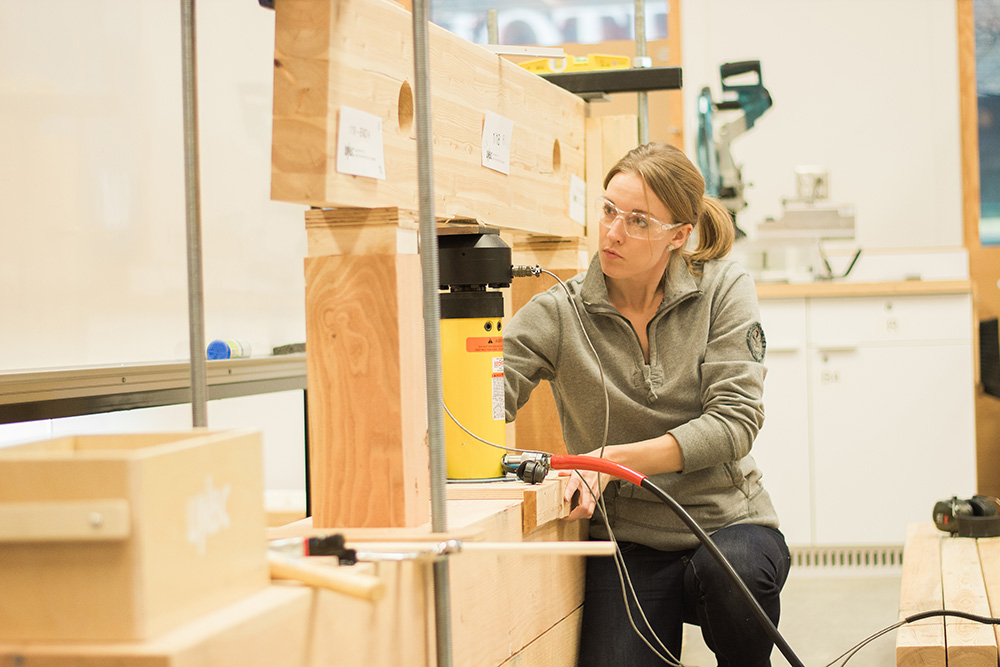 The northern BC economy is heavily steeped in oil and gas jobs. But programs like the University of Northern British Columbia’s Master of Engineering in Integrated Wood Design program are training workers for a new economy. Photo courtesy of UNBC.

Last month’s massive marches to demand action on climate change showed the issue has become central to this election campaign.

But when we asked Tyee readers to guide our election coverage, they wanted to know how the parties would transition to a green economy without causing mass unemployment and upheaval.

It’s a critical question, especially for British Columbia’s north. As one of the fastest-warming regions in the country, it’s already feeling the impact of the climate crisis.

And with its reliance on resource industries — especially oil and gas development in the northeast, pipelines that carry products to the coast, and coming liquefied natural gas plants — it would be most dramatically affected by a transition away from fossil fuels.

That’s not the only impact. Traditional industries like fisheries and forestry are currently struggling and face an uncertain future, in part due to a warming climate.

What will the transition mean for the north?

The shift to a low-carbon economy has traditionally been touted as a choice between jobs and environment. But there’s a growing awareness that the outlook might not be so bleak. Exciting opportunities exist, not only in a post-carbon world, but in the journey to get there.

In August, Forbes touted the shift as “the single biggest business opportunity in human history.”

Experts interviewed by The Tyee about the transition to a post-carbon economy tended to make three points: It’s possible. It likely won’t be comfortable. And it’s going to take a lot of political will.

Marc Lee, senior economist with the B.C. office of the Canadian Centre for Policy Alternatives, says how easily we transition depends on how quickly we begin to move quickly to slash emissions.

“If you’re trying to get to zero next year, it’s going to be disruptive,” he says. “If you have two to three decades as the period to manage that transition, then it shouldn’t be a problem.” A 30-year transition — with steady progress during that period — puts us in line with current predictions for avoiding catastrophic climate change, he added.

Christopher Flury is a Fort St. John-based engineer and president of the local chamber of commerce. His income is entirely based on the natural gas industry.

“It’s a major portion of our GDP,” he says, estimating that up to 75 per cent of the local economy relies directly or indirectly on oil and gas.

The region is seeing an increase in renewable energy projects, with eight wind projects currently proposed, he notes.

“I think a good mix between oil and gas and renewables is how things are going to transition in northeast B.C.,” he says. “If we transition away and completely shut down the industry, I’d say there are over 350 operators just in Fort St. John that would lose their jobs.”

B.C. has 4,000 direct jobs in oil and gas extraction, almost all in the northeast. In addition, last year there were 39,000 oil and gas jobs in engineering and infrastructure building.

Western regional director Gavin McGarrigle says the union is promoting a “just transition” for workers affected by potential job losses in the oil and gas sector.

Governments need to create a realistic plan for moving away from fossil fuels that ensures workers not only have replacement jobs, but ones that come with pensions, benefits and long-term stability.

The renewable energy industry hasn’t delivered those kinds of jobs so far, he said. And without buy-in from workers, he says, discussions and politics become increasingly polarized and transition progress will be slowed.

“The reality is, if you don’t put workers front and foremost in the conversation, then you end up with people that actually take you backward,” McGarrigle says. “Where the conversation screeches to a stop is when you give them tokenism and platitudes about green jobs and renewable energy, and really when you scratch the surface there’s nothing there.

“We’re calling for a whole-of-government approach, where they’re sitting down with business, with labour, planning out where the economy is going, where the opportunities [are], who can we get retrained, how we [can] make sure these jobs are not just replacing jobs with pensions and benefits with non-union, precarious work,” he says.

“No way should workers in a particular sector have to bear the brunt of something that was caused by the combined actions of society and a particular corporation. It was a societal problem that got us here, and it’s got to be a societal response to get us out.”

In many ways, northern B.C.’s economy after fossil fuels could look a lot like its past. Smaller, community-oriented initiatives that represent local culture, values and ecosystems would replace pipelines and fracking.

Communities and individuals in the north are already beginning to envision what that might look like. Most projects are small and preliminary but are seen as scalable.

Many advocates of a transition say the first step should be to look for the low-hanging fruit — the sectors that could be ramped up quickly to provide opportunities that match the skills of displaced workers.

Remediation tends to top their list, both related to the oil and gas industry and in restoring forests ravaged by wildfires, industry and infestations.

Shannon McPhail, executive director of Skeena Watershed Conservation Coalition, points out that an investment in land restoration would not only generate jobs, but could also support declining salmon stocks and lead to more sustainable forestry practices. MORE