While B.C. aims to drastically cut fossil fuel emissions, a new report from an environmental action group says the province should end an even more dangerous contributor to climate change: clearcutting forests.

The report released last week by Sierra Club BC found 3.6 million hectares of forest were clearcut across B.C. between 2005 and 2017 — an area larger than the size of Vancouver Island.

Those areas are considered “sequestration dead zones” for 13 years after they’re clearcut. That means until newly-planted trees grow and mature, the areas release more carbon into the atmosphere from decomposing matter and soil than those young trees can capture and absorb.

After reviewing provincial data, the report found logging in B.C. contributes 42 million tonnes of carbon emissions into the atmosphere.

“At a time when we urgently need to be reducing all forms of carbon pollution to defend our communities from the climate crisis, clearcut logging in B.C. is making the problem notably worse,” the study’s author and Sierra Club BC’s senior forest and climate campaigner Jens Wieting said in a statement.

“We can only have a stable climate if we protect intact forests, and we can only sustain intact forests if we stabilize the climate. Both are only possible if we reform forestry and give up clearcutting.”

According to Sierra Club BC, the province does not include forest carbon emissions in its official greenhouse gas inventories.

That practice should change immediately, the report argues, with the group calling for more government research and monitoring along with an overall end to clearcutting, primarily within old-growth forests.

The report found of the 3.6 million hectares of clearcut forest studied — which amounts to just over nine per cent of B.C.’s total forested land — 1.9 million hectares were old-growth forests.

Those old-growth trees are the best defence against carbon emissions due to their great capacity for capturing the gas. According to the report, B.C.’s old-growth rainforests can store over 1,000 tonnes of carbon per hectare, which is one of the highest rates on the planet.

In his own statement, Nelson city Coun. Rik Logtenberg said local governments’ efforts to reduce carbon emissions will do little to lessen impacts on the climate unless clearcutting comes to an end.

““Clearcutting the forests that surround our communities can have serious impacts on watersheds, dirtying drinking water and putting us at greater risk from flooding, landslides, droughts and wildfire,” said Logtenberg, who also chairs a group of elected leaders known as the Climate Caucus.

“We need provincial leadership to reduce all emissions, including those from forestry, and we need reformed forestry laws to protect and restore forests as a natural defence against climate change.”

The province’s CleanBC plan, unveiled just over a year ago, aims to reduce greenhouse gas emissions by 40 per cent by 2030, based on 2007 levels.

Legislation was introduced earlier this year that would set interim emissions targets that will help reach that goal.

While the plan includes initiatives to reduce pollution from industry — primarily oil and gas — and pushes towards energy-conserving buildings and electric vehicles, it does not mention the forestry industry or logging practices.

In a statement, the Ministry of Environment said it does record emissions from forestry operations, but does not apply them to the province’s emissions totals “as is standard carbon accounting practice around the world.”

Disturbing finding about destruction of old-growth rainforest in B.C.

The Ministry of Forests, Lands, Natural Resource Operations and Rural Development added it introduced the forest carbon initiative in 2017, which includes planting more trees and hauling away residual waste from forest floors.

The initiative, which is jointly funded by the province and the federal government to the tune of $290 million, has led to the replanting of roughly 12 million trees on the coast and in the Cariboo, with an anticipated 70 million more anticipated by 2022.

The ministry also anticipates 55,000 hectares of fertilization along the coast between 2019 and 2022, after seeing 14,000 hectares fertilized over the past 18 months.

In a statement, BC Council of Forest Industries president and CEO Susan Yurkovich didn’t dispute the Sierra Club’s science, but pointed to its track record in “sustainable forest management.”

“Each year, we harvest less than one per cent of the working forest land base and three trees are planted for every one harvested,” she said. “We have more forested areas certified to internationally recognized sustainability standards than any other jurisdiction in the world.” 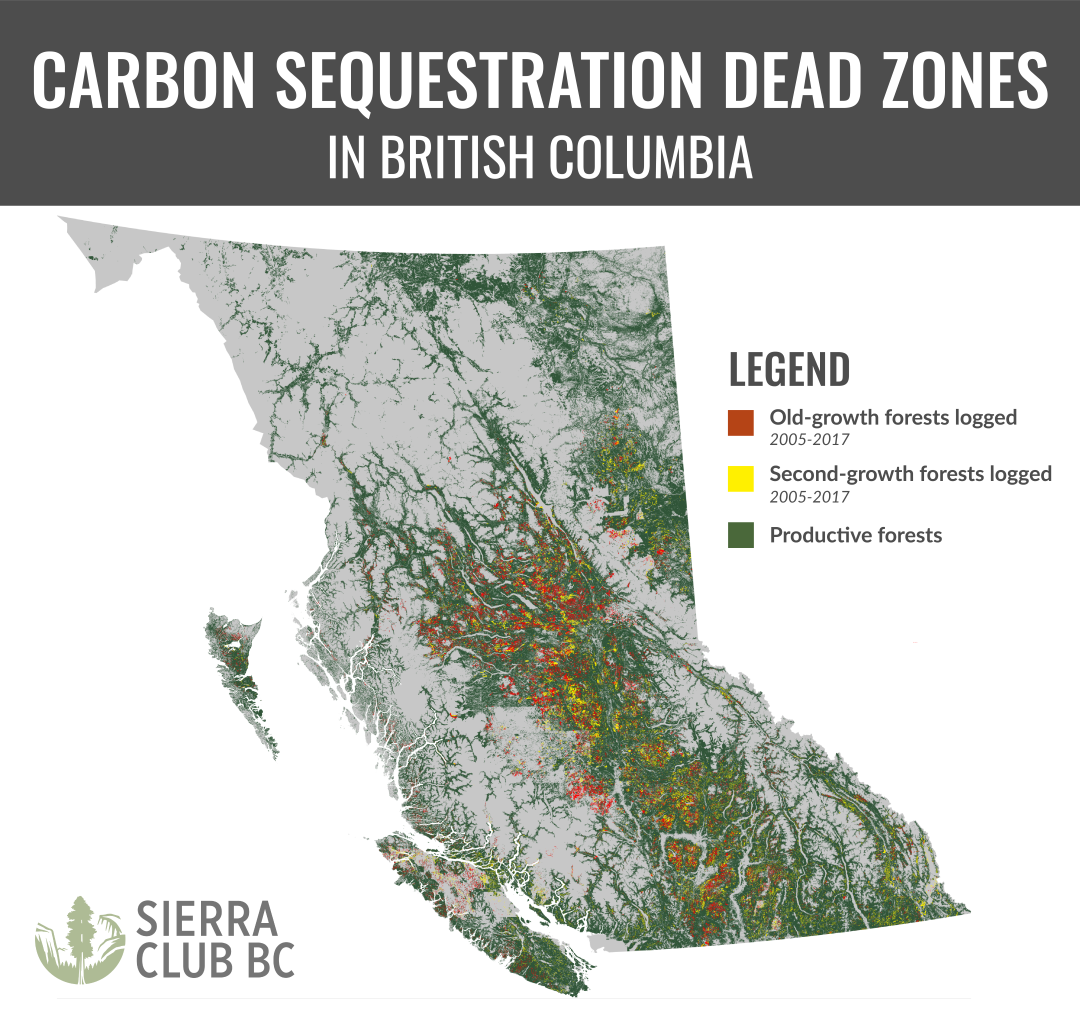 In our latest report, we’ve found that ending clearcutting of forests is as important for B.C. climate action as phasing out fossil fuels.

Areas clearcut across B.C. between 2005 and 2017 total 3.6 million hectares, a combined area larger than Vancouver Island. These areas are “sequestration dead zones”: clearcut lands that release more carbon than they absorb (see map).

For thirteen years after clearcutting, the carbon released into the atmosphere from decomposing organic matter and exposed soils is more than the carbon captured by the growth of young trees. In other words, it takes thirteen years for young trees to have a net effect of capturing carbon. In the meantime, clearcut areas remain “sequestration dead zones.”

This report includes a number of recommendations for forest conservation and reform of the provincial forestry sector to support a stable climate and healthy communities.

‘Logging scars’ show impact of deforestation in Canada is worse than we know, research find