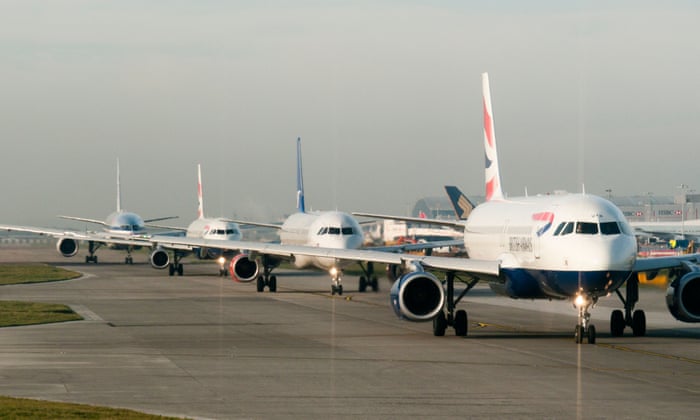 The UK is responsible for 4% of global aviation CO2, according to researchers. Photograph: Alamy

Worldwide CO2 emissions from commercial flights are rising up to 70% faster than predicted by the UN, according to an analysis.

Carbon dioxide emitted by airlines increased by 32% from 2013 to 2018, according to a study by the International Council on Clean Transportation.

Researchers said the rate of growth far exceeded that used to develop projections for CO2 emissions by the UN’s International Civil Aviation Organization.

The ICCT report says: “The implied annual compound growth rate of emissions, 5.7%, is 70% higher than those used to develop ICAO’s projections that CO2 emissions from international aviation will triple under business as usual by 2050.”

The total increase over the past five years was equivalent to building about 50 coal-fired power plants, the ICCT calculated. The study shows the UK is responsible for 4% of global aviation CO2 emissions, behind only the US (24%) and China (13%).

Domestic flights in the US and China account for a quarter of all aviation emissions. The US, China and EU account for 55% of all emissions.

Airlines in the 36-member countries of the ICAO have signed up to a carbon reduction scheme known as Corsia and will start recording their emissions this year.

The scheme is framed to allow aviation to continue to grow but reduce its net footprint by purchasing carbon emission offsets – or funding a carbon dioxide saving elsewhere. Although aviation accounts for just over 2% of all global emissions, that proportion is expected to expand significantly as other sectors such as energy make more rapid progress to decarbonise.

A forecast released by Airbus on Wednesday said the number of commercial aircraft in operation would double to 48,000 planes worldwide by 2038. It predicted urbanisation and an emerging middle class would fuel rapid growth, particularly in the Asia-Pacific. MORE

Emissions from Canada exports have tripled since 1992’s UN pact. But who’s counting? 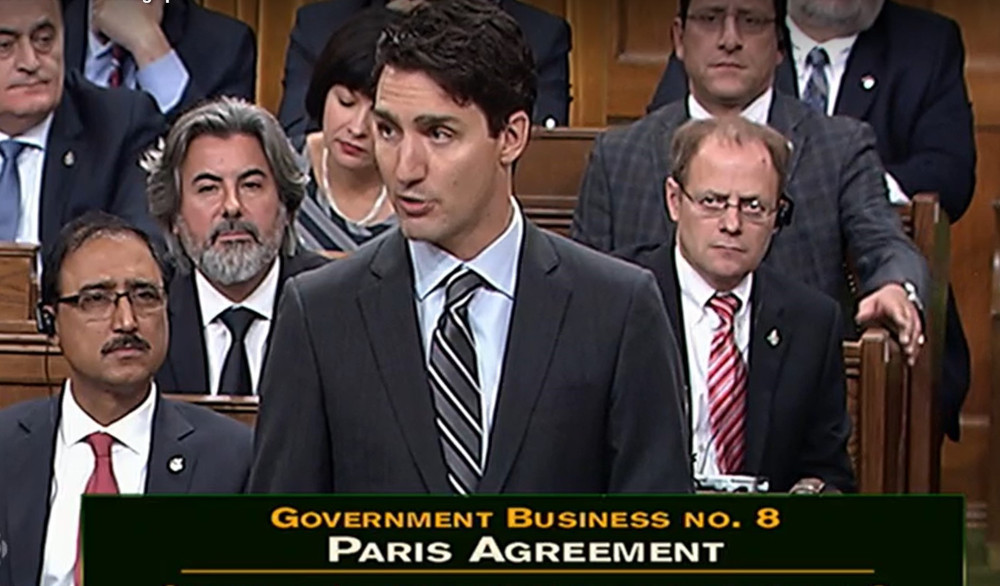 Prime Minister Justin Trudeau unveiling his climate plan in 2016. It fails to account for the global impact of fossil fuels shipped outside our borders.

Throughout the recent federal election — and for months before — Canada’s prime minister repeatedly asserted, “We need returns from a pipeline to pay for green energy.”

The gut sense of anyone worried about climate change is that this proposition is wrong. Why would we build a pipeline to convey and then burn fossil fuels, as a way to — get this — avoid burning fossil fuels? The logic seems twisted.

The deeper question of concern to me is whether Trudeau’s position is a political calculation, or one based on some form of economics?

By political calculation, I don’t mean an attempt to appease western voters; that clearly has failed. Rather, is Canada playing a high stakes political game that exploits a weakness in international carbon accounting to shift blame on to other countries. Let me explain…

As a signatory to the United Nations Framework Convention on Climate Change, Canada has agreed to “protect the climate system for the benefit of present and future generations of humankind.”

Under the UN Convention, developed countries are required to report their greenhouse gas emissions every year. They only account, however, for emissions physically occurring within their national boundaries.

This means that Canada does not count more than 900 million tonnes of carbon dioxide that comes from others burning our fossil fuel exports each year. This amount far exceeds our own territorial emissions that are just over 700 million tonnes of CO2 equivalents.

Canada completely washes its hands of any responsibility for the greenhouse gas emissions that result from our massive fossil fuel exports. Yet, we know full well that the impacts of carbon emissions are shared globally. To put it crudely: not only are we screwing future generations ourselves, we are aiding and abetting other countries in doing so too.

Since Canada committed to the UN Convention on Climate Change in 1992, our territorial carbon emissions have gone up by an embarrassing 17 per cent. But this is nothing compared to the emissions from our fossil fuel exports that have almost tripled! 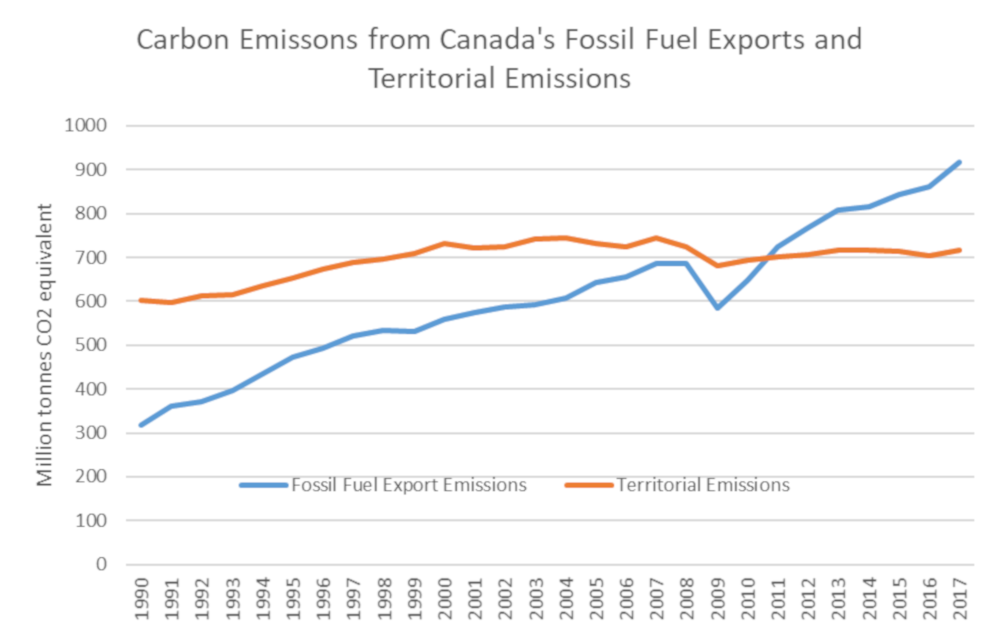 Since Canada committed to the UN Convention on Climate Change in 1992, emissions from our fossil fuel exports have nearly tripled. Chart via Chris Kennedy

An even greater problem with Canada’s massive oil and gas sector is that it undermines our ability to transform to a low-carbon economy by crowding out other potential forms of capital. Building new pipelines hinders a potential green economy because it uses resources that we need to construct further renewable energy supplies, renovate our building stock and electrify transportation.

We already have all the wealth, talent and resources we need to invest for a green future — we just need to find the courage and leadership to employ them.

The $4.5-billion-dollar Trans Mountain pipeline has been the key battleground between Canadians who care about climate change and those who pretend to. It may become the defining issue that describes Trudeau’s legacy in history books.

But the Trans Mountain pipeline is just a drop in the bucket. Canada’s oil and gas industry has grown so massive that it now has over $500 billion of assets. This is more than 20 per cent of Canada’s capital stock, excluding residential homes.

And here’s the kicker. Any plan to seriously address Canada’s carbon emissions needs to give up on these fossil fuel assets — and construct a new green capital base.

Writing off the old Trans Mountain pipeline would be a historic first step to Canada’s prosperous low-carbon future. SOURCE

Lliam Hildebrand, is the executive director of Iron and Earth, an oilsands worker-led group that is calling for training and opportunities to work on renewable energy projects to assist the Alberta economy. File photo. SHAUGHN BUTTS / EDMONTON JOURNAL

Except for an isolated pocket of skeptics, there is now an almost universal acceptance that climate change is a global emergency that demands immediate and far-reaching action to defend our home and future generations. Yet in Canada we remain largely focused on how the crisis divides us rather than on the potential for it to unite us.

It’s not a case of fossil-fuel industry workers versus the rest, or Alberta versus British Columbia. We are all in this together. The challenge now is how to move forward in a way that leaves no one behind.

The fossil fuel industry has been — and continues to be — a key driver of Canada’s economy. Both of us had successful careers in the energy sector, but realized, along with an increasing number of energy workers, that the transition we need to cope with climate change could not be accomplished solely from within the industry.

Even as resource companies innovate to significantly reduce the carbon burden of each barrel, the total emission of greenhouse gases from all sources continues to rise. We must seize the opportunity to harness this innovative potential in alternative and complementary ways, mobilizing research and development, for example, to power carbon-intensive steelmaking and cement manufacture from hydrogen or to advance hybrid energy storage systems — the potential for cross-over technology is immense.

The bottom line is inescapable: we must reach net-zero emissions by 2050 in order to prevent runaway global warming, which is why we launched Iron & Earth in 2016. Led by oilsands workers committed to increasingly incorporating renewable energy projects into our work scope, our non-partisan membership now includes a range of industrial trades and professions who share a vision for a sustainable energy future for Canada — one that would ensure the health and equity of workers, our families, communities, the economy, and the environment.

An important aspect of the transition away from fossil fuels is that our nation’s energy-sector workers are ideally positioned to help build a vibrant and globally competitive clean-energy sector. This is because fossil-fuel infrastructure has a similar industrial “DNA” to sustainable-energy infrastructures, such as biofuels, biomass, geothermal, hydrogen and many other large-scale steel infrastructure projects. Thus, these projects require many of the same skill sets, the kind of attributes found in abundance in our oil and gas workforce.

A 2016 survey by Iron & Earth of skilled trades workers primarily with experience in the energy industry showed that 63 per cent believed their current skill set could be transferred to build and maintain a renewable energy future with some training, and 86 per cent expressed interest in training and development in renewables.

We need more than incremental change; we need planning and action on a scale and pace we haven’t seen since the Second World War when Canada massively retooled our economy to fight tyranny; we need to once again unite in common purpose to retool, re-invent and re-invigorate our industrial sector in defence of our collective future.

The lead must come from whichever party forms the next government. It will take unparalleled courage and political leadership motivated by an understanding that addressing climate change, while also developing our energy industry, doesn’t have to divide the country. Our only shot at avoiding the very worst of the climate emergency is if we do this together. MORE