Over the past 20 years, BC forests were so heavily logged that net carbon emissions are now twice as large as Alberta’s oil sands. 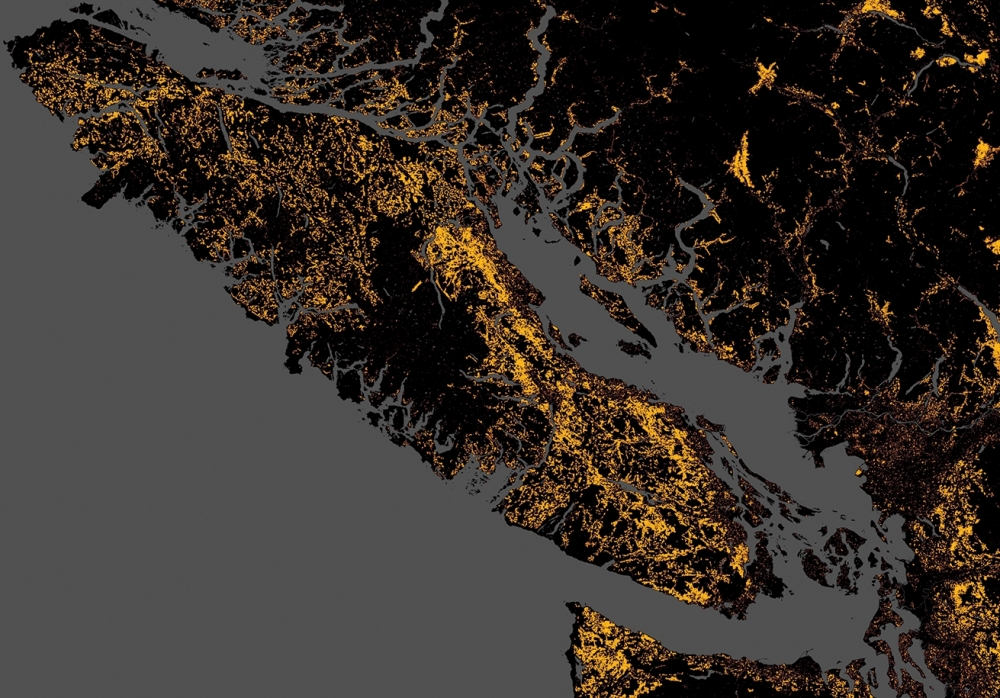 Forest loss (yellow) on Vancouver Island and the south coast mainland between 2000 and 2018 Source: Hansen/UMD/Google/USGS/NASA

AT THE HEIGHT OF LAST SUMMER’S ECONOMIC MELTDOWN in the BC interior’s forest industry, Marty Gibbons, president of United Steelworkers Local 1-417, based in Kamloops, told the Canadian Press: “Something needs to change immediately or these small communities that don’t have other employers are going to wither and die.” Gibbons concluded that “the largest driving factor is the Province’s complex stumpage system that results in high fees.”

The average stumpage rate in BC—the price the Province charges forestry companies for harvesting a cubic metre of tree on Crown land—was around $23 for both the interior and the coast in 2019 (1). But the average stumpage paid for timber harvested from Crown land by major raw log exporters like TimberWest and Western Forest Products in the Campbell River Natural Resource District was much lower, ranging between $8 and $11 per cubic metre. Smaller companies paid even less—as little as $5 per cubic metre. Yet raw logs for export were selling at an average price of $128 per cubic metre through 2019 (2).

Raw logs worth $4.146 billion were exported from BC to other countries for processing over the past five years (3). This huge overcut—unnecessary to meet domestic and international demand for BC’s finished wood products—has averaged 6.5 million cubic metres per year over those five years, equal to 41 percent of the total cut on Crown and private land on the coast (4). So claims that high stumpage rates in BC are the problem that needs to be solved seem out of touch with reality.

But Gibbons is still right: something “needs to change immediately.” The required change, however, might be more than what he’s thinking. The interior’s forest industry has been destabilized by two climate-change-related phenomena—devastating wildfire and explosive mountain pine beetle infestation—that have been amplified by the immense extent of BC’s clearcut logging. Gibbons wants to knock a few bucks off the forest companies’ costs so they can run more shifts at the mills. What’s really needed, though, is a much deeper kind of change, one that would quickly transform BC’s forest industry. To start, we need to end the export of raw logs and shift that same volume to a new class of forest: protected forest-carbon reserves.

There’s an urgent need to remove carbon from the atmosphere and reduce emissions at the same time. The only way to remove carbon on a large scale and then store it safely for a long time is to not harvest healthy, mature forests of long-lived species.

The next 10 years need to be full of bold ideas as we look for and find solutions to the climate crisis. Initiatives like the Carbon Tax in Canada are necessary to disincentivize the use of fossil fuels, but planet Earth isn’t going to give us time to tax our emissions into submission. We need some quick shifts that will cut 10 megatonnes with a few strokes of the Premier’s pen. In BC, protecting the forest instead of destroying it is our only realistic option. If we don’t do this, we’ll run the risk that the rest of the world will start counting the emissions we are releasing from our forests and begin to think of us—and our manufactured wood products industry—as the Brazil of the North.

Perhaps what’s required most at this critical moment is recognition by the BC government that an international market for sequestered forest-carbon is coming soon, and that forest companies need to start switching from destroying publicly-owned forests to protecting them. Not just old-growth forests, but mature second-growth stands of long-lived species, too.

Forest loss (yellow) on Vancouver Island and the south coast mainland between 2000 and 2018 Source: Hansen/UMD/Google/USGS/NASA

Our government leaders don’t seem to be thinking straight yet. Instead, deforestation on the BC coast is accelerating. Over the past six years, the area of coastal Crown land that was clearcut increased 16 percent over the previous six-year period. Our provincial forest’s capacity to serve as a carbon sink has vanished. Its catastrophic collapse is recorded in a 20-year segment of the Province’s annual inventory of provincial greenhouse gas emissions. In 1997, BC forests could sequester the equivalent of 103 megatonnes of CO2 annually. By 2017 that had fallen to 19.6 megatonnes (5). From 2020 on, our forests will be a net source of emissions—even without including those from wildfires. The image above shows—in yellow—the physical area of Vancouver Island, and the adjacent mainland coast, that was clearcut between 2000 and 2018. Vancouver Island has become an ecological war zone. But a different economic role for the forest is emerging, one that doesn’t destroy it.

That new purpose is highlighted by a gaping hole in Canada’s plan to meet its emissions reduction commitment under the 2015 Paris Agreement. Canada’s 2018 progress report to the UN admits there’s a nearly 100-megatonne gap in the plan to 2030 (and this assumes the rest of the plan will actually work). How will Canada live up to its promise over the next 10 years? The progress report puts it this way: “Potential increases in stored carbon (carbon sequestration) in forests, soils and wetlands will also contribute to reductions which, for a country such as Canada, could also play an important role in achieving the 2030 target.”

The report offers no other possibility for filling that gap.

Canada, then, will likely depend on using the carbon sequestration capacity of its forests to meet its Paris Agreement commitments.

Article 5 of the Paris Agreement encourages all countries to “…promote and cooperate in the conservation and enhancement, as appropriate, of sinks and reservoirs of all greenhouse gases not controlled by the Montreal Protocol, including biomass, forests and oceans as well as other terrestrial, coastal and marine ecosystems.”

Depending on how Article 6 of the Paris Agreement is eventually detailed (its development was stymied at the Madrid COP), it’s possible that an international market mechanism for forest carbon is coming, and it can’t come soon enough.

The over-exploitation of BC’s forests has added to an explosion in net carbon emissions, delivered to the atmosphere each year by the forest industry’s endless road building and progressive clearcuts. Below, I’ll show why this now amounts to over 190 megatonnes every year (and possibly much more), a far more powerful carbon bomb than is being dropped by Canada’s oil sands industry (6). It’s long past time for us to understand the inner workings of the bomb and to defuse it.

There are two separate parts to BC’s bomb, and I will take you through each of these in some detail below.

First, when a mature or old forest stand is logged, assuming it’s healthy, the living biomass that’s killed and cut up into small pieces begins a premature process of decay, often hundreds of years before that decay would occur naturally.

Secondly, when that mature or old, healthy stand is clearcut, its potential to sequester carbon in the future is lost and it could then take anywhere from 60 years to several hundred years before a new replacement forest could sequester as much carbon as was being stored in the previous stand.

Let me take you through the inner workings of each of these parts of BC’s carbon bomb. First, let’s consider the magnitude of the carbon emissions released when wood prematurely decays. 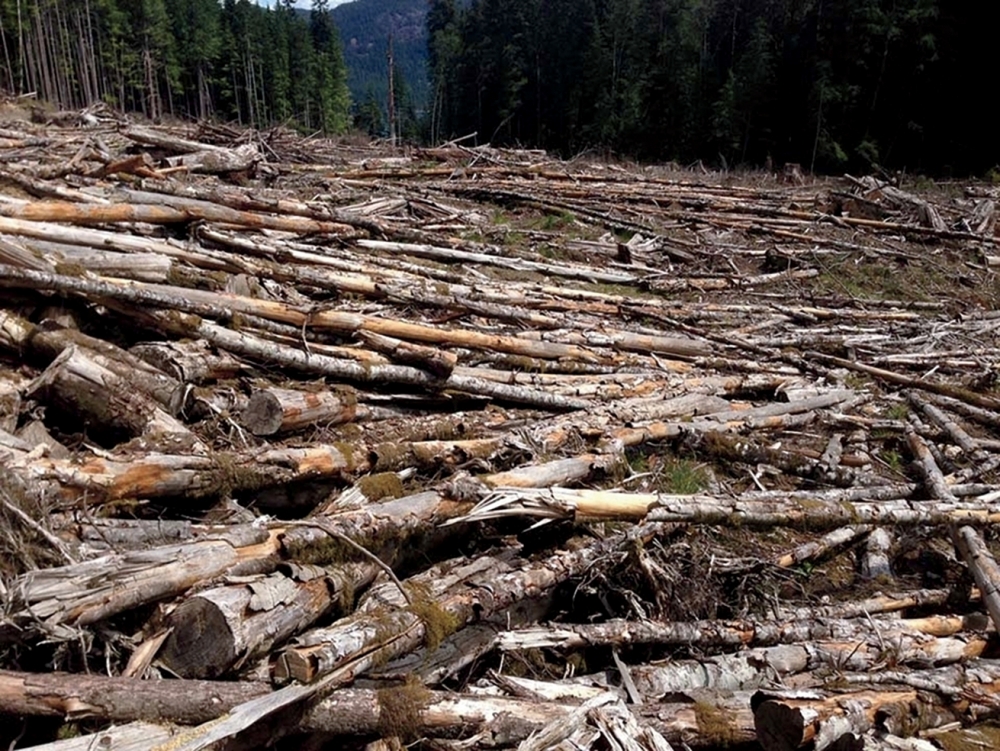 WHEN AN AREA OF FOREST IS CLEARCUT, three decay processes are initiated that result in emissions of carbon to the atmosphere.

First, the removal of the trees allows the sun to warm the forest soil to a higher temperature than was possible when it was shaded by trees. That additional warmth speeds up decay processes and the release of greenhouse gases, a process somewhat akin to the melting of permafrost in the Arctic. Soil scientists tell us that forest soil contains even more carbon than all the trees and other biomass that grow in it. Recent studies have reported that as much as 20 percent of the carbon in the layer of soil at the forest floor is released to the atmosphere after an area of forest has been clearcut. This release is a wild card in our emerging understanding of the impact of clearcut logging on carbon emissions. For now it remains unquantified, but it’s definitely not zero.

The second decay process begins after an area of forest is clearcut and the unused parts of trees left on the forest floor begin to decay. In his 2019 report Forestry and Carbon in BC (document at end of story), BC forest ecologist Jim Pojar estimated that 40 to 60 percent of the biomass of a forest is left in a clearcut. That includes the branches, stumps, roots, pieces of the stems that shattered when felled, the unutilizable tops of the trees, and unmerchantable trees that are killed in the mayhem of clearcut logging.

For our purpose, we will use the mid-point of Pojar’s 40 to 60 percent estimate: half of the biomass is removed, and half remains on the forest floor. The Ministry of Forests’ log scaling system tells us what volume of wood is removed from the forest as merchantable logs. We then assume that an equal volume of wood is left in the clearcut.

In 2018, the total volume of wood removed from BC’s forests, as reported in the ministry’s Harvest Billing System, was 54.1 million cubic metres. As per above, we are using the same number for the volume of wood that was left in clearcuts all over the province. So the total volume of wood in play is 108.2 million cubic metres. Both pools of wood—the wood left behind and the wood trucked away—begin to decay after a relatively short period of time following harvest. Each cubic metre of wood will eventually produce about 0.82 tonnes of CO2-equivalent emissions (7). So the wood left behind will produce 44 megatonnes and the wood trucked away will also produce 44 megatonnes of CO2-equivalent emissions—eventually.

The average 6.5-million-cubic-metre cut for raw log exports accounts for 11 megatonnes of that 88-megatonne carbon bomb.

You might have heard that the carbon in the logs that are harvested and turned into finished wood products will be safely stored in those products indefinitely. But the Ministry of Forests’ own research shows that after 28 years, half of the carbon in the wood products is no longer being safely stored; at 100 years, only 33 percent of the wood is still in safe storage (graph below). The rest will have returned to the atmosphere or is headed in that direction. 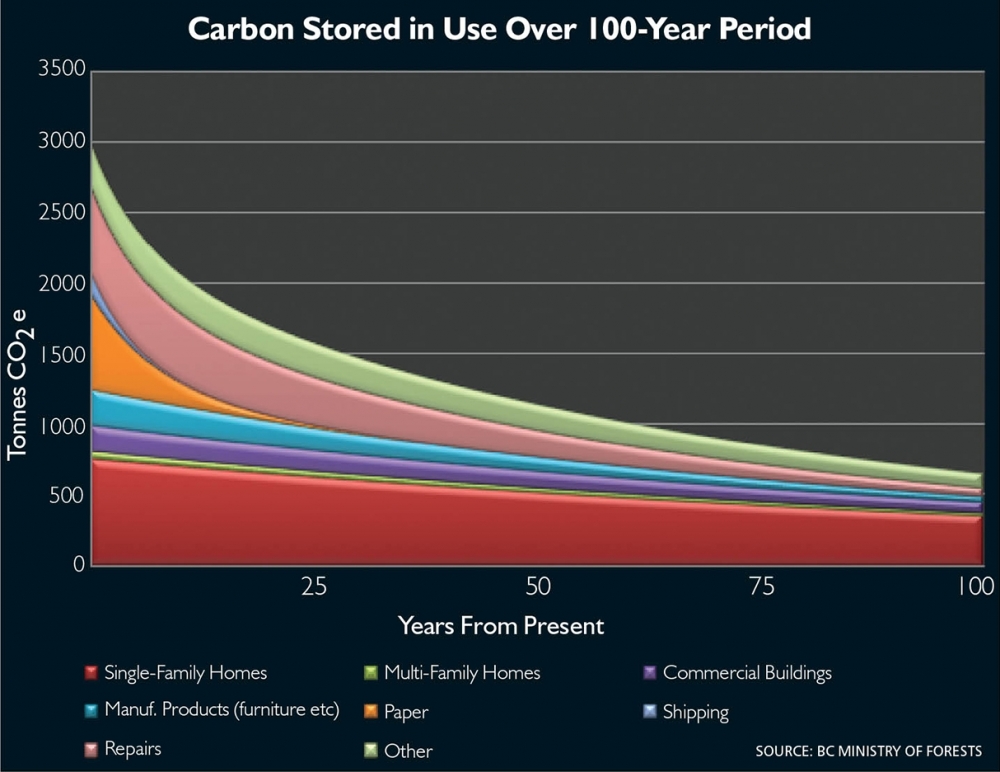