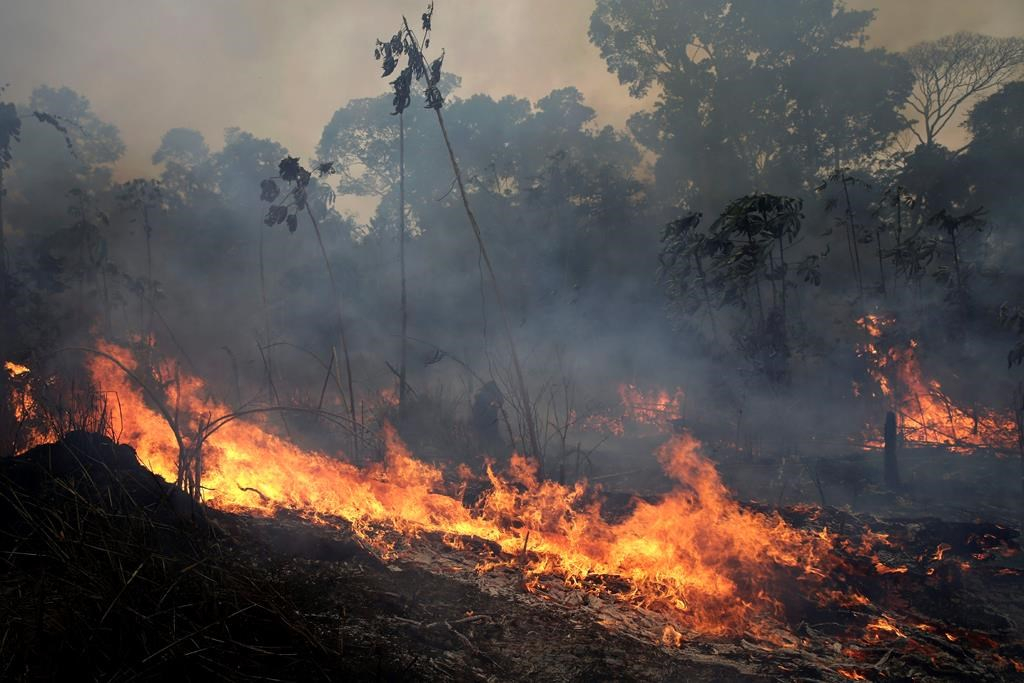 A fire burns along the road to Jacunda National Forest, near the city of Porto Velho in the Vila Nova Samuel region which is part of Brazil’s Amazon, on Monday, Aug. 26, 2019. Photo by The Associated Press/Eraldo Peres

Canada is forging ahead with trade talks with the South American Mercosur trading bloc, hoping to push Brazil to better protect the critical Amazon rainforest, a government spokesman said Tuesday.

The talks are continuing despite Brazil’s rejection of international funding to help fight fires in the Amazon, apparently over a personal spat with France’s President Emmanuel Macron.

Canada began trade negotiations last year with the four full members of the Mercosur group — Argentina, Brazil, Paraguay and Uruguay. There have been six rounds of talks, most recently in June.

Environment groups last week asked the federal government to abandon those talks in a bid to force Brazilian President Jair Bolsonaro to end the rapid deforestation experts say is partly to blame for the record number of fires burning in the Amazon this year.

Tuesday, NDP Leader Jagmeet Singh echoed them, saying in a statement that Prime Minister Justin Trudeau “is putting the interests of rich corporations ahead of the fight against climate change by continuing free-trade negotiations with President Bolsonaro.”

A spokesman for International Trade Minister Jim Carr said the talks will continue “because we are committed to diversifying our trading partners” but that trade is not the only thing on the agenda.

“As part of negotiations, Canada is seeking environmental provisions that would be more ambitious than the current (World Trade Organization) guidelines, and include sustainable forest management and combating illegal logging and related trade,” said Michael Jones. MORE

LONDON (Reuters) – Climate-change protesters threw red paint at the Brazilian embassy in London on Tuesday to demonstrate against damage to the Amazon rainforest and what they described as violence against indigenous tribes living there.

Police arrested six activists from the Extinction Rebellion group after they glued themselves to the embassy windows and climbed onto a glass awning above the entrance.

The protesters had splattered red paint and sprayed red handprints over the facade, along with slogans such as “No More Indigenous Blood” and “For The Wild”.

Brazil contains about 60 percent of the Amazon rainforest, a bulwark against global warming thanks to the vast amounts of carbon dioxide it soaks up and recycles into oxygen.

Far-right President Jair Bolsonaro, who took office in January, has long been sceptical about environmental concerns. He argues that the Amazon is a resource that belongs to Brazil and should be economically developed. He also criticizes the existence of protected lands.

Critics say his rhetoric has emboldened loggers, ranchers and informal miners, resulting in a dramatic acceleration of deforestation and in violence against the rainforest’s indigenous inhabitants.

Last week, data from Brazil’s own space research agency showed that deforestation on Brazilian territory had jumped around 67 percent in the first seven months of the year. Bolsonaro has rejected the agency’s data and fired its chief. MORE