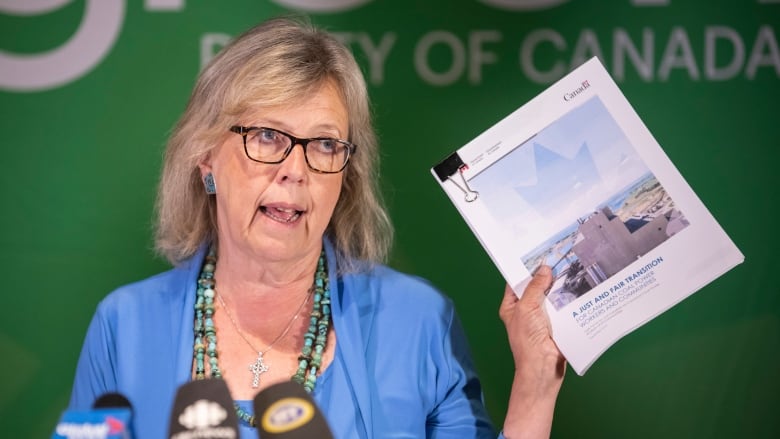 Green Party Leader Elizabeth May held a press conference Wednesday to unveil the party’s plan to support workers in the fossil fuel industry as they transition to a renewable energy economy. (Ben Nelms/CBC)

Green Party Leader Elizabeth May has unveiled a multi-pronged plan to help workers in the gas and oil sector transition to a renewable energy economy, working to allay fears that her climate action plan would bleed jobs as she ramps up pre-election campaign efforts.

The Green worker transition plan, which includes skills retraining programs and massive retrofit and cleanup projects designed to create employment, fleshes out details from the Green Party’s climate action plan called Mission: Possible, that was released in May.

Making the announcement in Vancouver on Wednesday, May said she understands the anxiety among workers in the fossil fuel industry and wants to take an “all-hands-on-deck” approach to transform Canada’s economy.

Along with climate action, she said the key platform priorities will be democratic reform, pharmacare and real conciliation with Indigenous people.

…Strong federal leadership is needed to make Pharmacare a reality, because it is far from clear that expanding public health insurance is a current priority for all provinces. Fiscal capacity varies a great deal between the provinces but the federal government has the fiscal means to act if it finds the political will to do so.

The federal tax system could be used to recoup some of the cost savings of employers, workers and individuals which would result from a more cost efficient single-payer plan.

A federal program would make it easier to establish a national drug formulary and to achieve the savings of co-ordinated drug purchasing. Finally, a federal Pharmacare plan could be implemented more quickly. Canada has already waited too long.  DOWNLOAD the Report