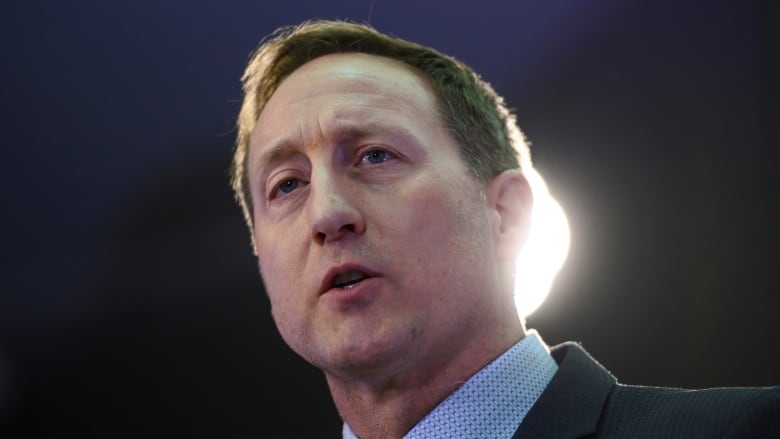 Peter MacKay speaks to a crowd of supporters during an event to officially launch his campaign for leader of the Conservative Party of Canada in Stellarton, N.S. on Saturday, January 25, 2020. (Darren Calabrese/The Canadian Press)

Peter MacKay isn’t saying he would do nothing to reduce Canada’s greenhouse gas emissions. But he does have a narrow reading of the degree to which Canada shares the blame for climate change.

While MacKay has said Canada has an “obligation” to do “our part,” he also has cast doubt on whether Canada can meet its target for 2030. He has twice said that “we’re not the problem” and has described Canada’s share of global emissions — 1.6 per cent — as “miniscule.” His most forceful statement on the issue of climate change so far may have been a colourful analogy involving nudity and organic produce.

His framing isn’t new, of course. Andrew Scheer’s climate platform for last year’s election prominently included a claim that Canada is a “small contributor” to a global problem — supported by a line graph comparing Canada’s emissions to the output of China, the United States, India and the European Union.

But such attempts to downplay Canada’s contribution have to contend with both the math of global emissions and the example of one of the country’s more successful federal conservatives — Brian Mulroney.

The annual rankings of global emissions are indisputably dominated by a handful of major emitters  But at 1.6 per cent, Canada ranks tenth among all nations in total emissions — more than 183 other countries, including large economies like the United Kingdom, Australia, Brazil and Mexico. Per capita, Canadians are among the highest emitters in the world — producing more than our fellow humans in China and India.

If Canada’s totals emissions aren’t the problem, then presumably the same can be said for the 183 countries that emit less than we do. But it’s also not obvious why any line should be drawn at Canada.

There is no solution to climate change that doesn’t involve reducing the emissions from those countries. Together, they represent 56.6 per cent of all national emissions.

But 56.6 per cent is not 100 per cent. If the other 188 nations of the world absolve themselves of their responsibility, that leaves the other 43.4 per cent unaccounted for.

It’s also worth noting that other countries are already ahead of Canada in reducing their emissions. No one is asking Canada to go it alone.

There are other arguments for MacKay to contend with here, too.

The price of passing the buck

If every tonne of carbon emissions has a negative impact on the environment — a reality reflected in a measure known as the “social cost of carbon” — then doesn’t it make sense to account for that harm, or restrict it?

Would stronger domestic emissions policies not do a better job of positioning Canada to compete in a low-carbon economy, as Justin Trudeau’s Liberals have argued?

And what about the threat of carbon tariffs? In the future, countries could begin to impose border charges on goods that originate in jurisdictions that fail to enforce stringent climate policies. Members of the European Union, for instance, have threatened to apply such tariffs on American products in response to President Donald Trump’s decision to pull out of the Paris accord.

The Canadian Steel Producers Association has now asked the federal government to consider “carbon border adjustments” as part of a plan to get the domestic steel industry to net-zero emissions by 2050.

Ultimately, there’s also the basic moral argument: today’s leaders and citizens owe it to future generations to do what they can to limit or avert the damage caused by climate change.

The Conservative Party’s turn toward worrying about “global emissions” last year seemed to follow from an unwillingness to propose alternatives to the Trudeau government’s domestic policies — in particular the federal carbon price.

Perhaps realizing that whatever plan they pitched to reduce Canada’s emissions would carry an economic cost equal to or greater than the Liberals’ approach, the Conservatives pivoted to the notion that Canada could help other countries cut their emissions, and get credit for it — at no cost to Canadian consumers.

At the very least, it’s not clear why Canada couldn’t do both — by taking sufficient action to meet our own targets while also offering to help other countries meet theirs.

It’s also fair to ask whether those two things are, in fact, connected — whether reducing our own emissions would put us in a better position to pressure other countries to do the same.

Thirty-five years ago, Brian Mulroney wanted both Canada and the United States to reduce the sulfur dioxide and nitrogen oxide emissions that were causing acid rain to fall on both sides of the border.

American officials were reluctant to act, but the prime minister still went ahead with domestic action — negotiating a deal with provincial governments and industry to reduce the emissions from Canadian facilities.

“I believe you clean up your own act first before you can expect major concessions from someone with whom you are bargaining,” Mulroney said at the time.

Years later, Mulroney argued that his “clean hands” approach was not merely “the right thing to do” — it undercut American doubts about Canada’s motivations, he said, and gave Canada “moral leverage” in its discussions with the United States.

Canada’s role in creating the acid rain threat was perhaps more straightforward than its role in climate change, and it may have been easier to convince our closest ally to join our efforts.

But four months ago, Mulroney cited his own approach in the context of global climate change and the responsibility of Canadian leaders.

Reading aloud from a recent media report, Mulroney noted criticism of Canada’s climate targets and the fact that Canada’s per-capita emissions were second among the G20.

“So, what are we, as Canadians, to do?” Mulroney asked. “Lead.” SOURCE

The party of Diefenbaker, Clarke and Mulroney is now acting like a right-wing fringe supporting vigilantism and racism.

The crises around the pipeline through Wet’suwet’en territory and the subsequent outpouring of support nationwide have isolated the Conservatives and placed them as the odd man out in the House of Commons.

On Tuesday, Prime MinisterJustin Trudeau’s speech was heckled by the Tories to the point that the speaker had to appeal for calm. When Conservative Leader Andrew Scheer spoke to rebut the prime minister’s comments, his speech was negative and clearly on the side of the pipeline developers. He called for the prime minister to end the pipeline protests and that the protesters should “check their privilege,” whatever that meant.

Meanwhile the other parties in the House including the Bloc Quebecois, the NDP and the Greens all supported the position that the government must proceed with dialogue and negotiations to settle the matter. They got together to discuss it further, but the Conservatives were not invited. It was obvious that Scheer would have nothing to offer and be a distraction.

The Conservatives’ position was clear: They wanted the government to take action to remove the blockades. While the Conservatives constantly refer to the rule of law, there is a long-standing practice in Canada that police forces are independent and not to be directed by politicians or a political party. To do otherwise would lead to a slippery slope toward a police state and totalitarianism.

Speaking of the rule of law, the Conservatives have ignored the fact that the Supreme Court has ruled that most of British Columbia has never been ceded by treaty and the title remains with the First Nations. In this case, the rule of law is on the side of the Wet’suwet’en.

West of Edmonton, a group of vigilantes took it upon themselves to take down a blockade of a railway right of way. This drew a tweet from Conservative leadership hopeful Peter MacKay, “Glad to see a couple Albertans with a pickup truck can do more for our economy in an afternoon than Justin Trudeau could do in four years.” This support for vigilantism was later taken down, but it is a reflection of the attitude that is prevalent in the Conservative camp.

Which leads me to ask, “What happened to the Conservatives?” The party of John Diefenbaker, Joe Clarke and Brian Mulroney is now acting like a right-wing fringe supporting vigilantism and racism. I doubt that those gentlemen would be welcome in today’s Conservative Party.

In the past, relations between the First Nations and the Conservative Party were usually positive. Mulroney supported the Treaty Land Entitlement Agreement for Saskatchewan which addressed a long-standing injustice over treaty land and was the largest land settlement in southern Canada.

Things changed for the worst in the 1980s and ’90s when the Reform Party came to prominence. It was a western-based party and its members discovered that attacking chiefs and First Nations was red meat to their base, so they pursued it. Rather than look at the potential of First Nations support, they chose to exploit us and our leadership.

Canada is a nation that is built on the rule of law and common sense. Before a railway could be built across the new nation, the government had to make treaty with the First Nations of the plains. This process stopped in the mountains because the American settlers in British Columbia refused to see the need to deal fairly with the First Nations.

Today Canada is paying the price and the politicians and those in power know it. Now Canada must make a modern-day treaty that is fair to all sides or we will continue to have confrontation and unrest as the people defend their land against outside development. SOURCE