More than two dozen young people are facing a month-long ban from Parliament Hill after staging a climate-change protest in the House of Commons on Oct. 28, 2019. (The Canadian Press)

Prime Minister Justin Trudeau said he heard loud and clear the message Canadians sent in the federal election for him to be bolder about climate change action.

Now young Canadians want him to prove it.

Twenty-seven youth with the group Our Time were arrested in the House of Commons on Monday morning after attempting to stage a sit-in to demand a Canadian “green new deal” be the first priority of all 338 MPs elected last week.

They had 338 letters to deliver to the new MPs that listed demands including a cut to emissions in line with international scientific consensus, respecting Indigenous rights, creating good new jobs and protecting the most vulnerable people.

Amara Possian: “I support organizations that are building a just and caring society.”

Amara Possian, a campaign manager with Our Time, said in a recent blog post that the first 100 days of a new government are a critical time as the government lays out its plans and priorities. With the Liberals held to a minority, they will need support from other parties to pass legislation and stay in power, which many environment groups see as leverage to push the Liberals to do more on climate change.

“This is a generational crisis and I’ve never felt the urgency of anything else in my life,” said Agarwal, clutching the trespassing ticket that bars him from returning to Parliament Hill for the next 30 days.

The protesters gained access to the House of Commons by joining a regular visitors’ tour, then sitting down on the floor once and refused to move. Within minutes, Parliamentary security officers forced them to leave. Some protesters were dragged out by their arms, while others were lifted up to their feet and forced to walk out. MORE

The idea of a green new deal comes mainly from Democrats in the United States who introduced resolutions in Congress last winter. The NDP co-opted the term in its campaign rhetoric, and the Green Party described their climate change plan, named “Mission: Possible,” as Canada’s green new deal.

Dan Woynillowicz, policy director at Clean Energy Canada, said the term “green new deal” may not take hold in Canada because it is too aligned with the United States. But he said if you look at where the Liberals, NDP and Green platforms align on climate change, there are “the makings of an agenda” that cuts emissions deeper and faster, and supports affected Canadian workers through the transition.

In particular, the parties aim to cut emissions in line with what the United Nations Intergovernmental Panel on Climate Change says is needed to keep the world from warming much more than 1.5 C compared to pre-industrial times. Investments in public transit, planting trees, encouraging electric vehicle use and investing in clean energy technologies are all among their common platforms.

Woynillowicz said he expects the Liberals to move quickly on their promised bill to legislate a fair transition for energy workers because that could help generate some good will in western Canada for climate action. Beyond that, the promised legislation to set five-year emissions targets and report publicly on progress would also be expected early, said Woynillowicz.

On October 2, 2019, the Green Party of Canada commented, via a press release, on its Green Climate Action Plan called “Mission: Possible.”

Aiming to exceed the U.S. Green New Deal, under this plan, the Green Party outlines a 20-step action plan to achieve the goal of zero emissions by 2050.

Part of the strategy outlined emphasizes the idea that heavy-duty industrial machinery will need to rely on biofuels. Although the plan is to ban internal combustion engines and ensure that cars, buses, and trains are powered by electricity by 2030, biofuels will still be needed for fishing, mining, and forestry equipment.

According to the plan, these biofuel needs will be addressed through the creation of biofuels using waste plant matter from forests and agriculture — and only plant-based biofuels.

Claiming that food that would otherwise be used to feed Canadians, the Green Party highly opposes food-based biofuels.

Its plan, therefore, promotes development of local, small-scale biodiesel production that would rely primarily on used vegetable fat from restaurants across Canada, along with wood and agricultural waste. Fuel switching to biodiesel would be required for agricultural, fishing, and forestry equipment. SOURCE 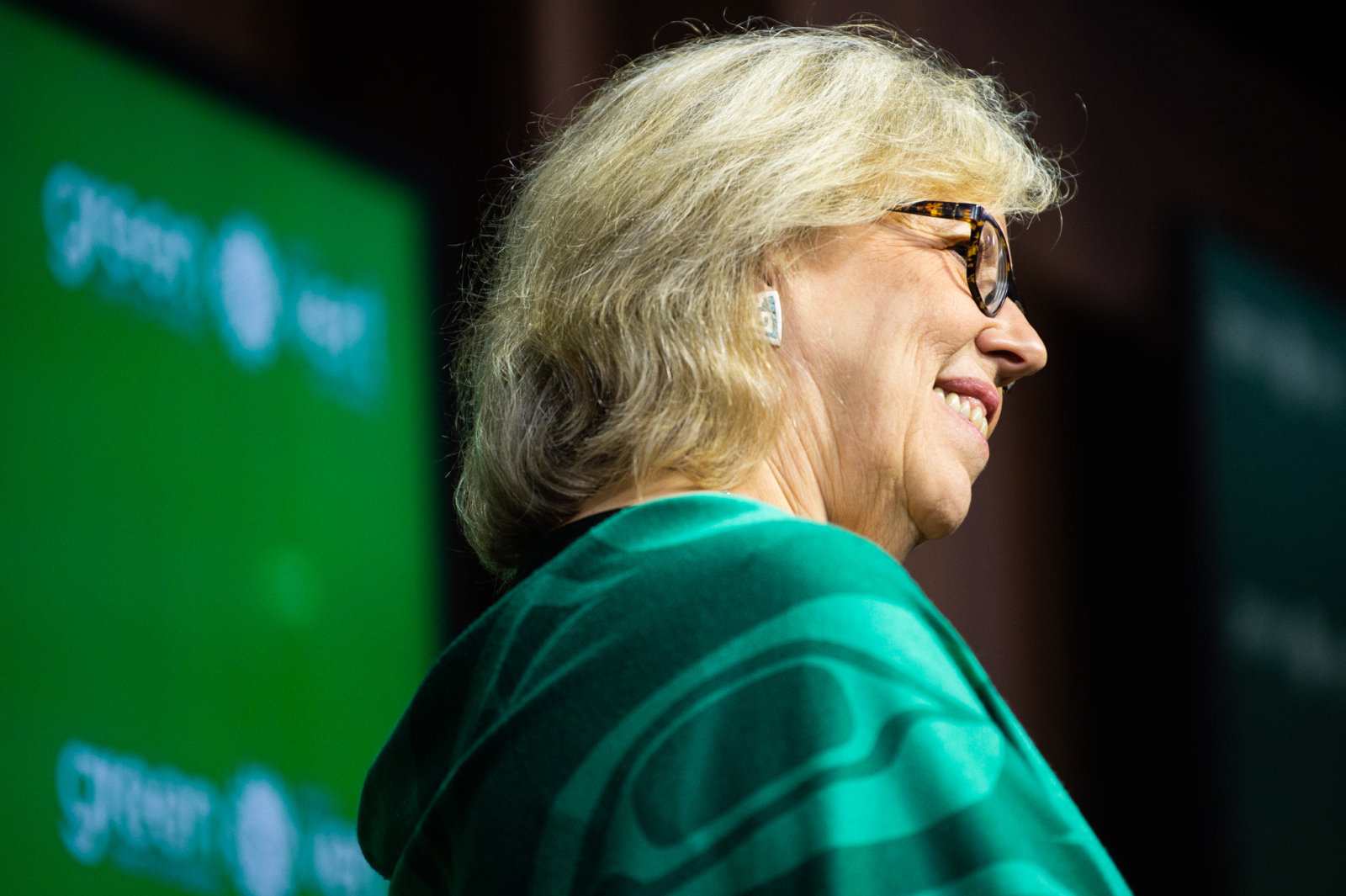 Green Party of Canada Leader Elizabeth May speaks to reporters on Parliament Hill on May 10, 2019. Photo by Kamara Morozuk

What else does the federal Green party stand for along with its call to put Canada on a “war footing” against climate change?

The Greens have been propelled into prominence because of the potential of their signature issue to be a prime ballot-box question in the Oct. 21 federal election.

What else they stand for is less conspicuous. Their place on the political spectrum is obscured by their slogan: “Not Left. Not Right. Forward Together.”

Elizabeth May, the lawyer and environmentalist who has led the party since 2006, welcomes the scrutiny that has accompanied speculation her two-seat Commons caucus could grow to a handful or more.

In an interview with National Observer, May said this election “feels so different to me” from the last one, in 2015. She told anecdotes of unexpected support, donations and crowds from a pre-campaign tour of 33 communities across Canada.

“I hope for a minority Parliament,” she said, relishing the prospect of securing a strong climate action plan in return for supporting a government short of a 170-seat majority.

“I’m more than ready for prime time. I don’t have any problem addressing any aspect of my life or my character and I’m very proud of my record” – @ElizabethMay told National Observer in an interview #cdnpoli

May, representing Saanich-Gulf Islands, was the only Green elected in the last election. Paul Manly won Nanaimo-Ladysmith in a byelection last May. Greens also hold seats in legislatures in British Columbia, New Brunswick, Ontario and P.E.I.

The centrepiece of the federal Green platform is Mission Possible, a 20-point national action plan to slash greenhouse gas emissions by rapidly phasing out fossil fuels, changing land use and industrial-agriculture practices, planting trees, improving the energy efficiency of homes and buildings and other actions.

May said the primary conditions for Green support of a minority government are adherence to the UN Intergovernmental Panel on Climate Change position — that global warming must be held below a 1.5 C increase above pre-industrial levels — and a pledge for a “dramatic transformational commitment” to cut carbon emissions in Canada.

“We will not, even for a first speech from the throne confidence vote, work with any party that isn’t fully committed to going off fossil fuels quickly,” May said.

“That means you can’t be building any pipelines, you can’t be fracking, you have to cancel the LNG (liquid natural gas) plant in Kitimat, you have to actually mean what you say — that we are committed to cutting 60 per cent of greenhouse gases by 2030.”

On non-environmental issues, May cited social justice proposals as a priority for the Greens. She said the proposals make the Greens “more progressive” than the New Democratic Party.

They would increase revenues by hiking corporate taxes on large companies, such as banks and internet giants, but not on small or medium-sized businesses. They would cancel the Trans Mountain pipeline expansion and halt fossil fuel industry subsidies. 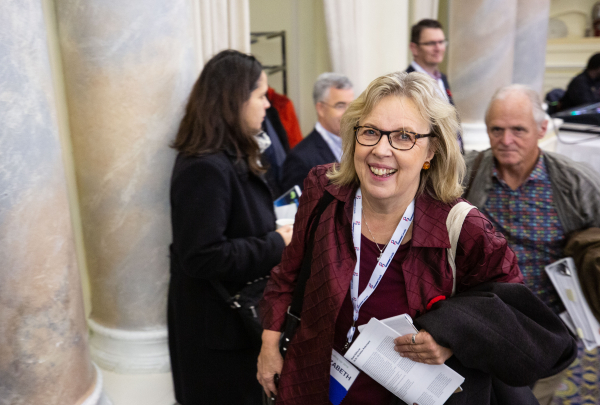 File photograph of Elizabeth May by Alex Tétreault

On Monday night, June 17th, the Parliament of Canada held a last few hours of debate on the Liberal motion that Canada accepts that we are in a climate emergency. The original motion had been tabled on May 16th. As Minister Catherine McKenna spoke in the chamber that day, I launched the Green response to the national clamour for a Green New Deal. Paul Manly (Green MP from Nanaimo-Ladysmith) and I launched Mission: Possible, calling for the complete elimination of fossil fuel use by 2050, slashing dependency by 60 per cent below 2005 levels by 2030.

We can see no other way for Canada to pull our fair share of the weight to meet the Intergovernmental Panel on Climate Change imperative that we must adhere to our Paris Agreement goal of holding global average temperature increase to no more than 1.5 degrees C.

Failing to meet that target, even allowing the global average temperature increase to reach 2 degrees C, will create unacceptably high risks that we will pass a point of no return. Human civilization and the extinction of millions of species requires that we take the climate emergency seriously.

It will not be easy, but we know it is possible.

The May 16th climate emergency debate was adjourned. It did not surface on our agenda again until the night of June 17th, with a time limited opportunity to consider the matter.

I addressed a nearly empty chamber.

All the other leaders were in Toronto for the Raptors Rally. That is not something I would criticize. The national Raptors reverie has been good for our spirits. We want to celebrate.

But why did the government pick that night for debate?

And, much, much worse, after passing a motion that we are in a climate emergency, why did they – the very next day – commit billions of federal public dollars to build a pipeline?

That pipeline will violate indigenous rights, threaten every waterway it crosses, the Salish Sea through which tankers will navigate and, at the same, time increase our climate warming emissions. It is reckless.

Worse, given the scale of the threat of climate breakdown, it borders on the criminal. MORE

At last a serious climate strategy! Other points within the Green’s 2019 climate plan:

The Green Party has Canada’s only comprehensive plan to avoid climate catastrophe.

Accept, at every level of government, that climate is not an environmental issue. It is the gravest security threat the world has ever seen.

2 – Establish an inner cabinet of all parties

Modelled on the war cabinets of Mackenzie King and Winston Churchill, parties will work together to ensure that climate is no longer treated like a political football. It requires all hands on deck.

Establish our new target and file it as Canada’s Nationally Determined Contribution with the UN Framework Convention on Climate Change: 60 per cent GHG reductions against 2005 levels by 2030; zero emissions by 2050.

Attend the next climate negotiation in Chile this year and press other countries to also double their efforts.

Restore funding of climate research within the Government of Canada and in the network of universities that received financial support before 2011.

Revenue neutrality will be achieved through carbon fee and dividend and we will eliminate all subsidies to fossil fuels.

No exceptions. It destroys ecosystems, contaminates ground and surface water, endangers our health and it’s a major source of GHGs.

By 2030, remove all fossil fuel generation from our national east-west electricity grid.