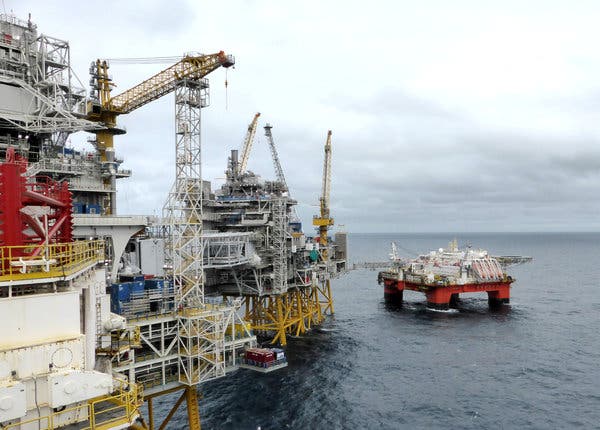 A Norwegian oil platform in the North Sea. Norway’s production has declined for two decades, but its development of the Johan Sverdrup deepwater field should reverse the trend. Credit: Nerijus Adomaitis/Reuters

HOUSTON — A surge of oil production is coming, whether the world needs it or not.

The flood of crude will arrive even as concerns about climate change are growing and worldwide oil demand is slowing. And it is not coming from the usual producers, but from Brazil, Canada, Norway and Guyana — countries that are either not known for oil or whose production has been lackluster in recent years.

This looming new supply may be a key reason Saudi Arabia’s giant oil producer, Aramco, pushed ahead on Sunday with plans for what could be the world’s largest initial stock offering ever.

Lower prices could prove damaging for Aramco and many other oil companies, reducing profits and limiting new exploration and drilling, while also reshaping the politics of the nations that rely on oil income.

The new rise in production is likely to bring economic relief to consumers at the gas pump and to importing nations like China, India and Japan. But cheaper oil may complicate efforts to combat global warming and wean consumers and industries off their dependence on fossil fuels, because lower gasoline prices could, for example, slow the adoption of electric vehicles.

Canada, Norway, Brazil and Guyana are all relatively stable at a time of turbulence for traditional producers like Venezuela and Libya and tensions between Saudi Arabia and Iran. Their oil riches should undercut efforts by the Organization of the Petroleum Exporting Countries and Russia to support prices with cuts in production and give American and other Western policymakers an added cushion in case there are renewed attacks on oil tankers or processing facilities in the Persian Gulf.

“Since all four of these countries are largely insulated from traditional geopolitical turmoil, they will add to global energy security,” Mr. Yergin said. But he also predicted that as with shale, the incremental supply gain, combined with a sluggish world economy, could drive prices lower. MORE