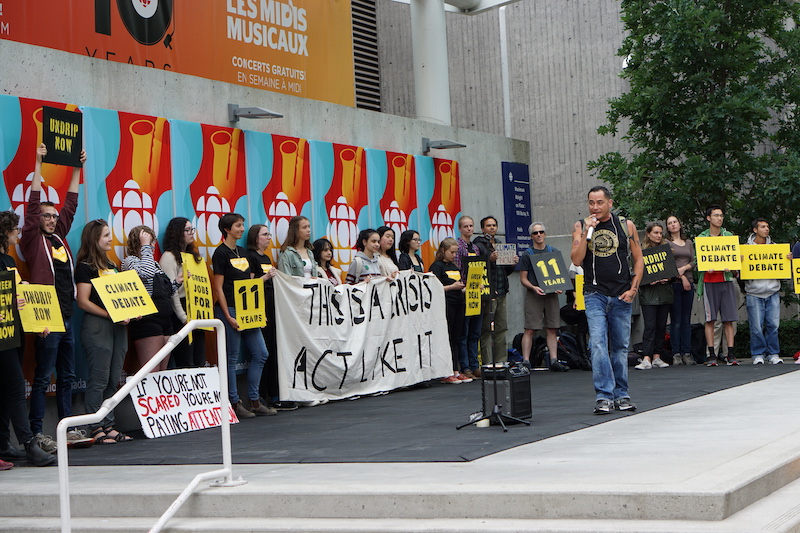 Rally at CBC Vancouver Wednesday told the broadcaster has a duty to ensure leaders debate critical issues for our future like climate change. Photo by Braela Kwan.

Hundreds of young people rallied across Canada Wednesday as part of a campaign to make climate change and a Green New Deal key issues in this fall’s federal election.

The rallies in more than 20 cities were aimed at pushing the CBC to broadcast a leaders’ debate focused on the two issues. They were organized by Our Time, a national campaign of young people and many — including the Vancouver rally — were held outside CBC offices.

Rajdeep Dhaliwal, a 24-year-old Vancouver-based organizer with Our Time, said voters need to understand each party’s positions on climate change.

“With an election this fall, I think people need to know who has the plan to deal with climate change at the scale that science and justice demand,” she said. “I’m talking about a Green New Deal for Canada.”

The idea of a Green New Deal first emerged in the United States and is gaining traction in Canada. It’s a proposal to address climate change by reducing emissions while addressing inequality and ensuring sustainable jobs to replace any that are lost during the transition.

“Millions of people watch our election debates, I believe this is the best way to make that happen,” she said. “Showing up to CBC will send a clear message to the producers of what is important to us.”

CBC did not say whether it would hold a debate focused on the issues.

In a statement, it said it recognized climate change was an important issue to Canadians and emphasized its continuing extensive coverage.

But it noted decisions on debates are made by the Leaders’ Debate Commission set up by the federal government. MORE

Ecojustice: You can help. Pledge today to vote for safe climate future on October 21.

This letter is by Cameron Fenton. Born and raised in Edmonton, Alberta, Cameron has worked on climate justice issues all across Canada. He currently works as the Canadian Tar Sands Organizer with 350.org. Please sign this urgent petition.

Drone footage via the Government of Alberta shows large clouds of smoke from the wildfires threatening areas of northern Alberta. Global News: Evacuation alerts and orders in place across the province

After tediously debating it for the past week, the Canadian House of Commons is poised to declare a climate emergency.1 If and when it’s passed, Catherine McKenna’s climate emergency motion will commit Canada to “meeting its national emissions target under the Paris Agreement” and go even further to“to keep global warming below 1.5 degrees Celsius.”

Frankly, this confuses me. If Canada is in a climate emergency, where is the emergency response plan?

That’s why today, I’m asking you to call on the Federal Leaders’ Debates Commission to organize a debate on climate change and Canada’s Green New Deal ahead of this fall’s federal election. Sign the petition.

Temperatures are rising across the country, and with it, the threat of another record-breaking wildfire season. Fires have already forced evacuations in communities like High Level and the Dene Tha’ First Nation in Northern Alberta.2 Just this week, smoke from these fires arrived in skies above Vancouver and blocked out the sun in Edmonton.3

I was born and raised in Edmonton, and for the past six years I’ve lived in Vancouver so I can say without question, that this is not normal. Honestly, I’m terrified. This could be the third record-breaking wildfire season in a row in British Columbia, and it’s average global temperatures have only risen 1ºC. Justin Trudeau’s current climate plan has us on a path to, in the best case scenario, warm the planet by another of 4-5ºC on average.

That would be devastating, and that’s why every person in this country needs to know which one of our major political parties has a real plan to tackle the climate emergency. The best way to that happen is with a federal leaders’ debate on climate change and Canada’s Green New Deal. Add your name to the petition.

In 2015, more than eleven million people watched the leaders’ debates, and there was only one question on climate change. This is unacceptable, especially for a country in a climate emergency.

This is the first election with a designated Leaders’ Debate Commission.4 And since they’ve been tasked with organizing election debates in the public interest, we have a chance to change the debate and make sure responding to a climate emergency is center stage.

Sign the petition to make sure climate change and Canada’s Green New Deal are at the center of the upcoming federal election.

This petition is just the start. When temperatures rise this summer, so will we. As climate impacts continue to strike our communities, we will keep building the movement for Canada’s Green New Deal and demanding a federal climate debate.

We need to change the debate. This is our time to do it.

PS – The movement for Canada’s Green New Deal is taking off. Over 100 town halls have already happened across the country to build a shared vision for a Green New Deal — and dozens are coming up. To find a town hall near you click here.