You may have heard the news that the Federal Court of Appeal will soon hear six legal challenges to the approval of the Trans Mountain pipeline project. The challenges will once again focus on the “consultation” with Indigenous peoples directly impacted by this project.

Before taking power in 2015, Justin Trudeau promised his government would not only consult First Nations, but would obtain consent from communities before projects like this one could proceed.

There has never been clear consent for the Trans Mountain pipeline.

The Federal Court has already ruled once that public consultation for this 1,150 km pipeline expansion, which would take bitumen from the tar sands in Alberta to British Columbia for export, was inadequate, and it overturned the original approval for the project.

The federal government, now owner of the pipeline thanks to the use of more than $4.5 billion of public money (with another $9.3 billion expected to be spent on construction costs), started a second consultation process in June. But when the government announced it was approving the pipeline project again, Indigenous peoples argued that the outcome of that consultation was predetermined. They say the government, as owner of the pipeline, has a financial interest that overshadows the public interest.

We should all ask: what is adequate consultation? When has consent been given? Should consultation that simply gathers the feedback people provide be accepted, or does the government have a responsibility to act on when impacted Indigenous nations say no?

These legal appeals are examples of the lengths Indigenous peoples need to go to prove their rights are being trampled and how difficult it is to hold the government and corporations accountable to the law. On the flip side, land and water defenders are being unjustly jailed and fined for simply voicing their dissent. This is a double standard of law enforcement that is difficult to reconcile.

The court ordered the legal challenges be heard quickly and rulings are expected within months.

Thanks to the generous support of people like you, the Council of Canadians is working in solidarity with Indigenous peoples and concerned people and communities to stop this pipeline.

Native protesters take part in a mass sit-in in front of the British Columbia legislature in Victoria on Oct. 22, 2012 to protest the proposed Northern Gateway pipeline.

Aug. 8, 2019 – Washington, DC, Aug. 8, 2019 — A United Nations (UN) report on climate change has for the first time cited strong land rights for Indigenous Peoples and local communities as a solution to the climate crisis. The Intergovernmental Panel on Climate Change (IPCC) Special Report on Climate Change and Land, released today in Geneva, analyzes the role of land management decisions in both reducing and adapting to the worst of what climate change will throw at us—and highlighted indigenous and community land rights as key to both endeavors.

In response, indigenous and community leaders from 42 countries—spanning 1.6 billion hectares of land customarily used or managed by Indigenous Peoples and local communities and accounting for over 76 percent of the world’s tropical forests—issued a statement emphasizing the long-awaited recognition of the role of forest peoples in protecting forests. The statement also noted that the report’s findings add to a growing body of evidence showing that secure land rights for forest peoples is essential to climate change adaptation and mitigation efforts.

“Finally, the world’s top scientists recognize what we have always known. We—Indigenous Peoples and local communities—play a critical role in stewarding and safeguarding the world’s lands and forests. For the first time, the Intergovernmental Panel on Climate Change (IPCC) report released today recognizes that strengthening our rights is a critical solution to the climate crisis,” the statement reads.

“Our existence has always been threatened when our lands are desired by governments and corporations,” said Sonia Guajajara, executive coordinator of Articulação dos Povos Indígenas do Brasil (APIB). “These interests would kill us or lock us up behind bars so that our lands can be changed to fit whatever scheme has been concocted. Now with this report there is recognition that how we have safeguarded our forests and lands benefit the entire world—but our rights to exist and manage these lands need to be strengthened. Will the world listen?”

While the IPCC report emphasizes the global need to increase food production, forests are often cleared to produce agricultural commodities that do not address food security needs, such as beef, palm oil, and soybeans. In their response statement, Indigenous Peoples and local communities worldwide discuss the false choice offered between managing intact landscapes to keep carbon out of the atmosphere and clearing landscapes for economic development projects that include agro-industrial plantations.

The statement notes: “Where our rights are respected, by contrast, we provide an alternative to economic models that require tradeoffs between the environment and development. Our traditional knowledge and holistic view of nature enables us to feed the world, protect our forests, and maintain global biodiversity.” MORE

Indigenous peoples can teach us lessons about wildlife and land use, experts say

The teens’ arguement was obviously one the Trudeau Government didn’t want to answer because, really, there was no moral answer they could make.

They argue the pipeline’s contribution to the climate crisis violates their right to a secure future. 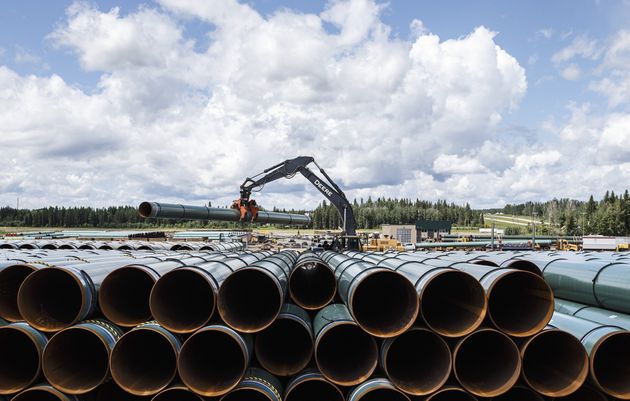 Pipe for the Trans Mountain pipeline is unloaded in Edson, Alta. on Tuesday June 18, 2019. THE CANADIAN PRESS/JASON FRANSON

A group of Canadian teenagers is fighting for the chance to take the federal government to court over the approval and purchase of the Trans Mountain pipeline, after its application to the Federal Court of Appeal was blocked by the Canadian government earlier this month.

In early July, 12 challenges were launched against the pipeline by various groups, including several First Nations and environmental organizations. They questioned the pipeline on various grounds, including Indigenous land rights and ecological harm to the southern resident orcas.

Olivier Adkin-Kaya, 18, Nina Tran, 18, Lena Andres, 17, and Rebecca Wolf Gage, 13 — who collectively call themselves Youth Stop TMX — filed a challenge arguing that the pipeline’s construction was in violation of their right to life, liberty and security of person as young Canadians through its contribution to the ongoing climate crisis.

The teens are from four different cities across the country and they argue that the pipeline’s construction and subsequent carbon emissions would contribute to ongoing climate change in Canada and continue to negatively impact their physical and mental well-being. Group members cited negative impacts like increased wildfire smoke due to rising global temperatures and growing anxiety over the climate crisis.

Of the 12 challenges, only the teens’ was blocked from moving forward in the judicial process. Adkin-Kaya says he doesn’t understand why only their challenge would be blocked.

“It’s beyond me why, of all the parties filing judicial review applications, Trans Mountain Corporation and the Government of Canada singled out of the youth, the party representing those who will be the first experience the more severe effects of the climate crisis,” he told HuffPost Canada. MORE