Not only does biochar trap carbon when it is created, it is heating homes in Sweden and feeding cows in Lincolnshire 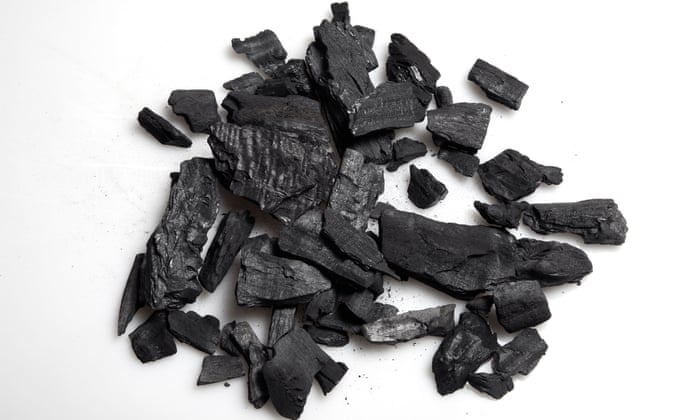 Biochar is a form of charcoal produced when organic matter is heated at high temperatures with little or no oxygen. Photograph: Alamy

It traps carbon in the ground for centuries, boosts plant growth, provides a sustainable heat source and could even reduce methane emissions from cows. Biochar may not be a silver bullet to combating the climate emergency, but it certainly ticks a lot of boxes.

A form of charcoal created via a special chemical process, biochar is not much to look at, resembling the aftermath of a particularly good barbecue. But it is already heating homes in Stockholm, feeding cows in Lincolnshire, and nourishing trees near Loch Ness.

“When you look at the range of benefits it has, it is quite phenomenal,” says Marc Redmile-Gordon, senior scientist for soil and climate change at the Royal Horticultural Society (RHS). While stressing that biochar is only part of the solution, he adds: “If we stop burning fossil fuels tomorrow, we’ll still have a lot of carbon dioxide removal to be doing, and this is one of the most effective ways we can achieve that.”

Following biochar’s recognition in the IPCC 2018 report, earlier this year Redmile-Gordon launched the society’s first trials to see how the material could improve plant growth. He estimates planting 10-20kg of biochar in your garden could offset the carbon from a five-mile return commute in a car for a month.

Biochar is a form of charcoal produced when organic matter – for example wood, leaves or dead plants – is heated at high temperatures with little or no oxygen in a process called pyrolysis. The normal burning or decomposition of these materials would release large amounts of methane and carbon dioxide into the atmosphere. Instead, creating biochar traps this carbon in solid form for centuries; it becomes a carbon sink that can be buried underground.

This is nothing new – in Stockholm they have already developed technology to trap the heat generated in the process and put it to use, so now the focus is on what benefits biochar can bring once it is in the ground. Although results vary depending on the type of biochar and soil used, Redmile-Gordon says this stuff can “alleviate some of the stresses that come from climate change”.

Biochar is full of xylem vessels and capillaries – channels that “can carry nutrients, air, water and house the biology that make for a healthy soil ecosystem”, he says. This means that in waterlogged clay soil it can reduce and redistribute water content, whereas in sandy soil affected by drought it can increase water-hold potential.

While scientific research has established the benefits of biochar in theory, deploying it in a way that makes a real difference is a challenge. One of its most obvious uses is in tree planting, which is poised to become a major activity in the UK over the coming years. The Conservatives have pledged to plant 30m trees a year, the Liberal Democrats have promised 60m a year, while Labour’s manifesto pledges an ambitious tree-planting programme.

“They bandy around these big numbers, but will they actually talk about the survival rates?” asks James MacPhail, commercial director of Carbon Gold, which sells biochar products for use in soil everywhere, from people’s back gardens to Ascot racecourse.

Up to 80% of trees planted along the HS2 rail route died after last summer’s drought. For MacPhail, this suggests not enough is being done to ensure tree growth: “If you plant 1m trees, great, but if 800,000 die, was it really worth it? If you can just do one thing to guarantee the survival of a tree going in the ground then maybe trees can save the planet.”

Research suggests biochar could be just the thing. Dr Saran Sohi leads the UK Biochar Research Centre in Edinburgh which is injecting biochar made from forestry residue such as bark around tree roots as part of a tree-planting project near Loch Ness. “It really does seem to offer some quite marked benefits in terms of tree health, early stage growth and nutrient management,” says Sohi. “Turning this particular part of the tree into biochar allows the nutrients to be returned to the forest sites in the process of replanting.”

Other projects are making strides in integrating biochar into farming, too. Richard Copley is part of the Innovative Farmers network, and received funding to trial feeding biochar to some of his cows this year. As both a farmer and a tree surgeon, Copley was keen to use the waste from his tree felling in a useful way, and he noticed the positive effects of biochar on his animals immediately.

Biochar is alkaline, so it balances the highly acidic diet of cows. Evidence suggests it is beneficial for microbial activity – like putting a probiotic into your stomach, according to Copley. Trials elsewhere have suggested biochar could reduce methane emissions, something Copley hopes can be explored later, as well as trialling the material on other animals such as chicken and sheep.

Meanwhile, Donna Udall, a researcher from Coventry University, is exploring whether manure from the biochar-fed cows is more effective as a fertiliser than biochar by itself. In some instances biochar can reduce crop yield by absorbing the nutrients needed by the plants – biochar as part of manure could be the solution.

While academics and researchers are optimistic about the benefits of biochar, they are not blind to the risks either. “If we’re wrong, and we spread hundreds of thousands of tonnes of charcoal over the UK, we can’t get it back out of the ground. We’ve got to be right. The stakes are really high,” says Udall.

Sohi adds: “This makes the government a bit anxious, which is why I think starting slowly and getting comfortable with the technology first is probably a good idea.”

Not only that, but there are also practical problems with trying to acquire the vast amounts of biochar needed to make a real impact. Udall says: “In order to scale up the technology, you’d have to plant woods everywhere, and obviously you can understand the impact that would have on the land that we need to grow crops.”

Only when farmers, food producers and other industries start putting their biomass waste through a pyrolysis process as standard would there be enough biochar to roll it out on a wide scale, says Udall. But eventually biochar could be made from green waste in urban areas – everything right down to the banana skin lying on your desk, she adds.

The key is working out how the source material affects the resulting biochar after pyrolysis, something which still needs substantial investigation. But with some estimates suggesting biochar could offset 1bn tonnes of carbon a year, it’s easy to see why people are getting excited about it. SOURCE

Like Loading...
Last year, the U.S.’s carbon-dioxide emissions increased by an estimated 3.4 per cent, the second-largest gain in the past two decades.  Photograph by Fernando Moleres / Panos Pictures / Redux
In 1974, the economist William Nordhaus described the transition from a “cowboy economy” to a “spaceship economy.” In the former, he wrote, “we could afford to use our resources profligately,” and “the environment could be used as a sink without becoming fouled.” But, in the spaceship economy, “great attention must be paid to the sources of life and to the dumps where our refuse is piled.” He added, “Things which have traditionally been treated as free goods—air, water, quiet, natural beauty—must now be treated with the same care as other scarce goods.”
“It’s absolutely the case that emissions and growth can be decoupled,” Marshall Burke, an assistant professor in Stanford University’s Department of Earth System Science, told me.

“But the switch to nuclear and renewables needs to happen more rapidly. “It takes policy. It won’t happen through markets alone.”

As a small but growing coalition of congressional Democrats, led by Representative Alexandria Ocasio-Cortez, have outlined as part of their Green New Deal, transforming the energy sector—and, really, the entire economy, in a just and more equitable way—will require some sort of carbon tax (preferably a “fee and dividend” approach, which distributes tax revenues as rebates directly to citizens), and also new regulations and huge investments. “We can decarbonize the electric sector at a fairly low cost….That’s where some of the cheapest emissions reductions are to be found. Extensive government subsidies could hasten the spread of renewables—specifically, solar, wind, and batteries—and offset any rise in emissions elsewhere….There are ways to reduce the use of fossil fuels in heating; utilities, for instance, can create incentive programs so that homeowners have a motivation to replace their boilers with electric heat pumps. MORE