Fifty years after an Ontario First Nation learned its fish were poisoned, research suggests the damage is being handed down from parents to children. On the campaign trail, activists are pressing the parties to build a treatment centre for those afflicted 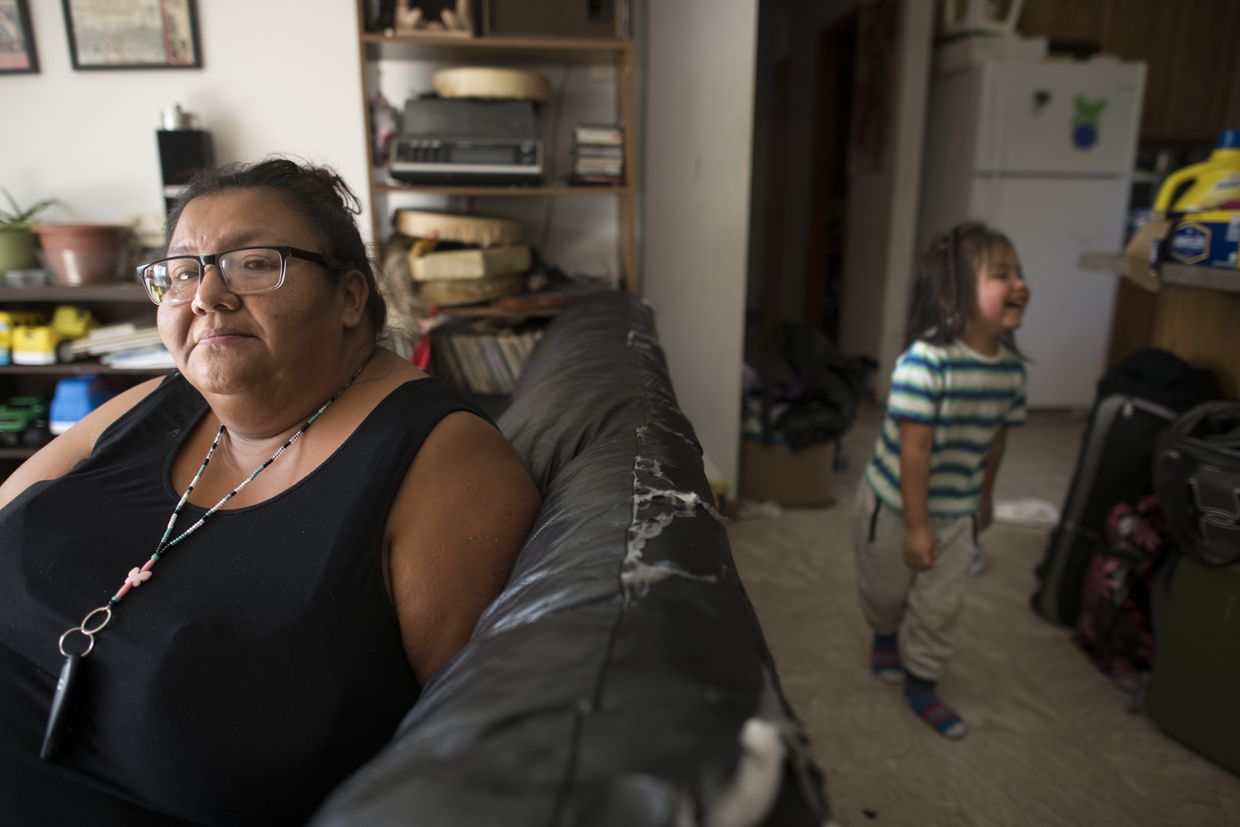 Chrissy Isaacs, 39, sits in her home on the Grassy Narrows First Nation alongside her grandson Kakiigawapi Swain, 3. Her daughters have shown neurological symptoms she believes are linked to mercury poisoning. PHOTOGRAPHY BY FRED LUM/THE GLOBE AND MAIL

For years, Chrissy Isaacs watched her grandfather struggle with the symptoms of mercury poisoning. He was a fisherman and a guide, his health damaged by the contaminated fish he ate.

Today, she worries about the fourth generation of his descendants. Her daughters, 18 and 13, are showing signs of neurological issues she believes are linked to the same mercury contamination that has devastated her community.

Generation after generation, Grassy Narrows First Nation has seen its crisis painfully prolonged. It has been almost 50 years since the revelation its fish had been poisoned by tonnes of mercury dumped into its river system by a paper mill owned by Reed Paper Ltd., in the Northern Ontario city of Dryden.

Recent studies by Montreal-based scientist Donna Mergler have found strong evidence – from umbilical-cord blood tests and community surveys – confirming the mercury damage is persisting from mothers to children. Children at Grassy Narrows are four times more likely to suffer from learning disabilities or nervous-system disorders if their mothers had regularly consumed fish during their pregnancies, one study found. (Dr. Mergler, professor emerita at the University of Quebec at Montreal, was the lead scientist in the studies, which were commissioned by Grassy Narrows First Nation.)

The crisis has emerged as a federal election issue, raised by candidates and audience members at national and local candidate debates since the beginning of the campaign. Activists have urged the party leaders to commit to building a treatment centre and hospice at Grassy Narrows for the victims.

In Toronto, thousands of people chanted, “Justice for Grassy Narrows” during a march for action on climate change in late September, and the mercury issue was debated again by candidates for the riding of Toronto Centre in early October. This week, at the first English-language debate of the federal leaders, NDP Leader Jagmeet Singh complained that Liberal Leader Justin Trudeau had mocked a Grassy Narrows supporter at a fundraiser, while Mr. Trudeau insisted that “money is not the objection” in the delays to the treatment-centre project.

A specialized medical clinic, with staff who understand the complexities of mercury poisoning and how to diagnose the syndrome, could be crucial for the people of Grassy Narrows. Without it, they must travel for treatment in Kenora or Thunder Bay or Winnipeg, where doctors often wrongly assume their neurological or mental symptoms are due to alcohol abuse, Ms. Isaacs says. MORE Indigenous Services Minister Seamus O’Regan has said the government is committed to building a care home to help the sickest of those impacted by the industrial mercury poisoning of Grassy Narrows First Nation.

The money is “booked” and “approved,” and the funding agreement the government wants the Indigenous community’s leaders to sign is “for keeps” and “legally binding,” he told CBC in June, adding that Chief Rudy Turtle will have “certainty … of our commitment financially.”

After reading the proposed funding agreement, Turtle said he does not have that certainty. The document, he said, is “the opposite of what O’Regan promised me and what he is telling the public.”

A draft of the proposed agreement obtained by the Star says Ottawa will contribute $10.5 million — far less than the total cost to build, according to a feasibility study — and that Ottawa can walk away from the deal for any reason with 60-days notice.

The draft also says the government may increase or decrease funding “based on approval of proposals or submissions from Grassy Narrows” and that ongoing funding for the construction of the home is dependent on annual approvals by Parliament. MORE

https://globalnews.ca/video/embed/5106095/WATCH: Prime Minister Justin Trudeau is apologizing after critics accused him of making a smug response to protesters at a Liberal fundraising event in Toronto Wednesday night

Prime Minister Justin Trudeau is apologizing for what critics called his “smug” response to protesters who hoped to draw his attention to mercury contamination in the First Nation communities of Grassy Narrows and Wabaseemoong during a Liberal fundraiser in Toronto on Wednesday night.

According to a video posted to Twitter that showed Trudeau delivering a speech during the Laurier Club event at the luxury Omni King Edward Hotel, Trudeau responded to protesters by saying repeatedly, “Thank you for your donation.” MORE 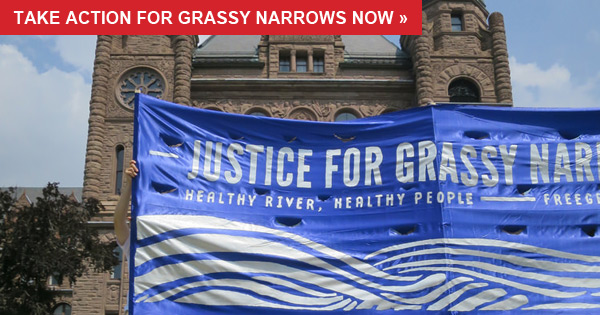 I’m sure you’re as shocked as I am by reading today’s Toronto Star report that the Ontario government is dragging its feet on commitments to search for mercury at the infamous Dryden mill site – mercury that may still be contaminating the waters of Grassy Narrows (Asubpeeschoseewagong) First Nation.

n the 1960s and early 1970s, the Reed Paper plant dumped 10 tonnes of mercury waste into the adjacent Wabigoon River upstream from Grassy Narrows. The property is now known to harbour significant amounts of mercury, including some that was illegally buried in steel drums decades ago.

A retired plant worker blew the whistle on this, saying he was ordered to haphazardly bury dozens of barrels of mercury waste in the 1970s. Recent soil samples from the property show unnaturally high levels of mercury, indicating that the barrels may have rusted away and released their toxic contents.

The people of Grassy Narrows deserve justice – they deserve clean land and water and for these illegally dumped contaminants to be fully removed and the area restored. Will you take a moment of your time to write to the Ontario government and demand that it fulfill the commitment to remediate this site? SOURCE