Cramer added that “the world’s turned on” the industry as they did with tobacco.

“The world’s changed,” Cramer continued. While companies like BP still mark profits, “nobody cares,” because “new money managers want to appease younger people who believe that you can’t ever make a fossil fuel company sustainable.”

“You can tell that the world’s turned on them, and it’s actually kind of happening very quickly,” said Cramer. “You’re seeing divestiture by a lot of different funds. It’s going to be a parade … that says look, ‘These are tobacco, and we’re not going to own them.'”

Oil stocks are in the death knell phase, says @jimcramer. “The world is turning on them…new kinds of money managers who frankly want to appease younger people who believe you can’t ever make a fossil fuel company sustainable.” pic.twitter.com/PV63RSudrf

Watch this entire thing: it doesn’t matter how well oil stocks are doing, the next generation sees them as toxic and doesn’t want them. Everyone involved in the fossil fuel divestment movement, and that is thousands upon thousands of mostly young people, made this happen. Wow. https://t.co/cDaD9VjBD2

350.org founder and author Bill McKibben had a similar takeaway, writing on Twitter Friday, “Thanks to all who fight so hard.” 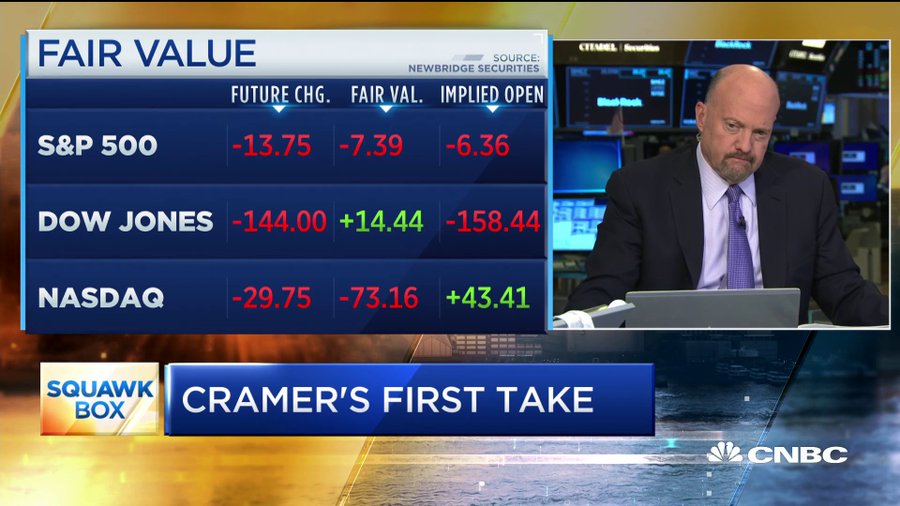 Cramer’s comments on “Squawk Box” came two days after he tweeted that he was “taking a hard pass on anything fossil” — a comment welcomed by Sierra Club executive director Michael Brune.

Lindsay Meiman, a spokesperson for 350.org — which has spearheaded the global movement to demand pension funds, university endowments, and other institutions divest from oil, coal and gas companies — said Cramer is only confirming what many market observers already understand.

“The financial tides are turning away from fossil fuels. Coal, oil and gas companies are not only the perpetrators of the climate crisis we’re now experiencing, but have also dangerously underperformed markets over the last decade,” Meiman told Common Dreams. “As we enter the climate decade, we’re demanding polluters pay for their destruction, and that all institutions and politicians cut ties from toxic fossil fuels to reinvest in a world that puts our health and safety first.” SOURCE 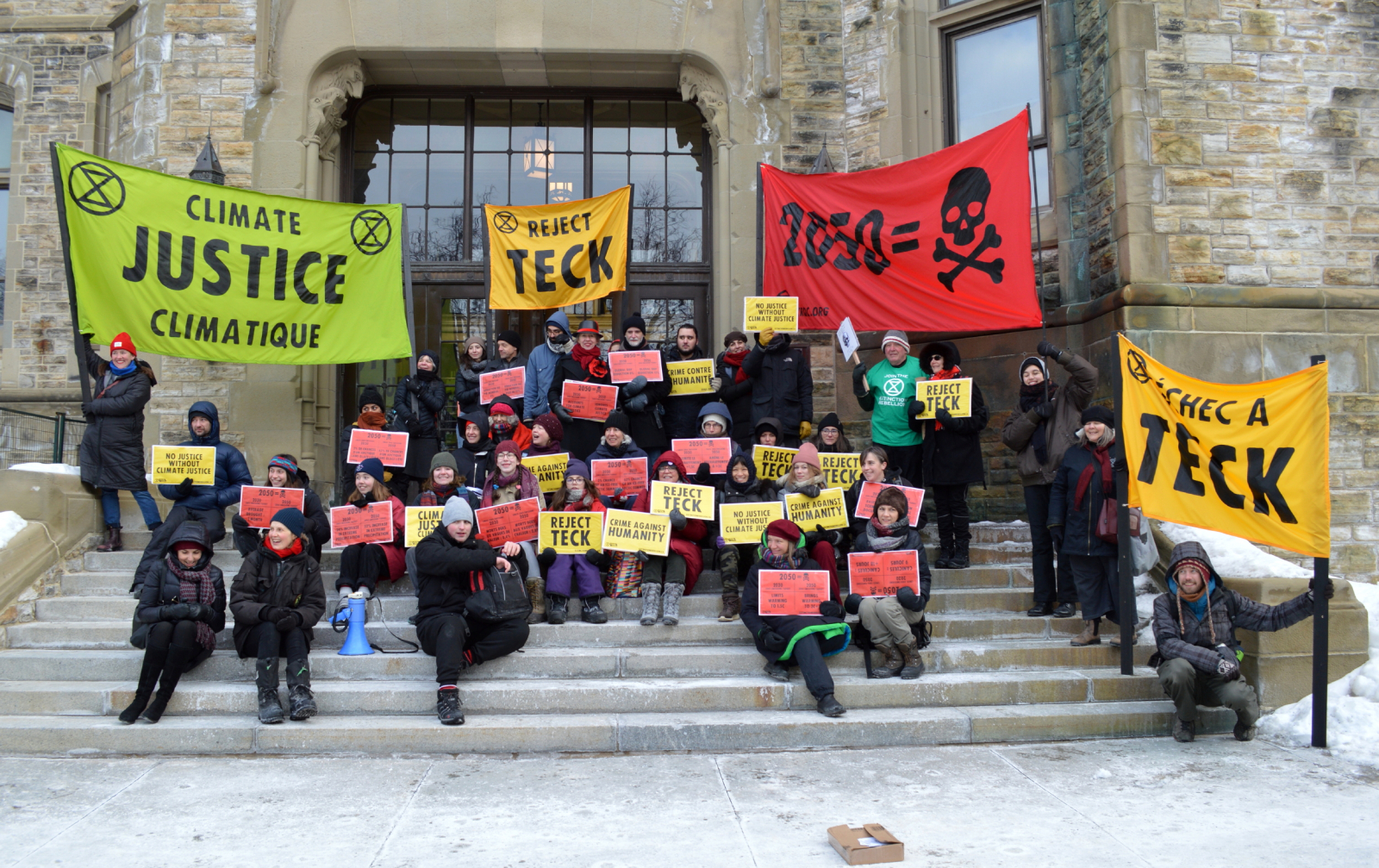 XR encampment on the steps of the Office of the Prime Minister and Privy Council building, January 31, 2020. Photograph by Kai McCall.

We represent a diverse group of academics working at universities and colleges across Canada who can no longer stand by in the face of human-driven climate change.

In October 2018, the Intergovernmental Panel on Climate Change (IPCC) published an alarming report confirming that climate change is posing a serious and unprecedented threat to the diversity and stability of life on earth. We face the imminent possibility of global eco-system collapse and mass social upheaval, and have little time to act.

For this reason, we the undersigned are united in the call for the Canadian government to take radical action in addressing the climate emergency. We are also united in the call for Canadian universities to divest funds from the fossil fuel industry that is contributing to the climate crisis, and to redirect investments toward the renewable energy sector and other climate-enhancing technologies.

In doing so, we support the efforts of the international group Extinction Rebellion (XR), which is calling attention to our extreme predicament. With XR, we are particularly concerned about the threshold for runaway climate change, which would lead to irreversible catastrophic changes that would impact us all. To keep below the 1.5°C increase in temperature that the IPCC report strongly urges we do not exceed, we must cut global CO2 emissions by 45% by the year 2030. MORE

Gathered around the snowy steps of the McGill Community Square on Nov. 12, over 200 students and faculty took part in a walkout calling for the university to divest from fossil fuels. The protest was co-organized by Divest McGill, Greenpeace McGill, and Climate Justice Action McGill (C-JAM).

Protestors chanted and cheered as speakers called on McGill’s Committee to Advise on Matters of Social Responsibility (CAMSR) to support their demand that the university divests from the top 200 largest fossil fuel companies. CAMSR, who was meeting simultaneously in the James Administration Building adjacent to the Square, was finalizing recommendations on divestment to be approved by the Board of Governors on Dec. 5. Divest McGill organizers hoped that the protest would be loud enough to be heard from inside the building.

Speaker Dr. Jen Gobby, PhD ‘16, returned her bachelor’s diploma in disapproval of McGill’s refusal to divest from fossil fuels. She expressed her disappointment with the university’s immutability on the issue.

“It’s 2019 […] and still, this institution is invested, as in financially benefiting, from an industry that is killing people, ravaging ecosystems and threatening the future of its student body,” Gobby said. “McGill, […] by continuing to invest in fossil fuels, is strengthening the resilience of an energy system that needs to die.”

Gobby, who recently finished her PhD at McGill in economics in the Anthropocene program, also highlighted the socio-economic consequences of climate change.

“We know that climate change is exacerbating existing social inequality and injustice,” Gobby said. “That people already marginalized by systemic racism, sexism, poverty, and colonialism are bearing the worst of the impacts, first and hardest.”

“I know that this is not a financial movement, it is a social one,” Carson-Apstein said. “Oil is holding up the capitalist colonial history of Canada. They can talk about percentages, and [socially responsible investing] and long-term goals, and we kept saying ‘sure, but there are kids out there who don’t have clean water’.”

Student organizer Laura Mackay, U4 Environment, stressed that McGill has historical precedents for divestment campaigns. She noted the university’s cessation of business ties with companies in South Africa’s apartheid regime in 1985 and divestment from the tobacco industry in 2007.

“Now, in 2019, we’re demanding that the university follows its own precedent and divests from another injurious industry,” Mackay said.

Professor Gregory Mikkelson, professor of environment and philosophy and president-elect of the McGill Association of University Teachers, has been part of the divestment campaign since it began in 2012. He congratulated protestors on their tenacity, despite the meager progress the campaign has achieved in the past seven years.

“Our bosses failed in their gambit to wait until a few troublemakers graduated,” Mikkelson said. “Those troublemakers passed on their arguments, their stories, their passion and the professors they roused from this ivory cloister.”

Despite the frigid temperature, most participants remained till the end of the protest, enthusiastically relaying cheers. For Katie Ross, U3 Science and member of Greenpeace McGill, the turnout demonstrated students’ eagerness for change.

“I think it sends the message that were a unified force,” Ross said. “[We are] not going to stop […] until we reach divestment from fossil fuels.” SOURCE