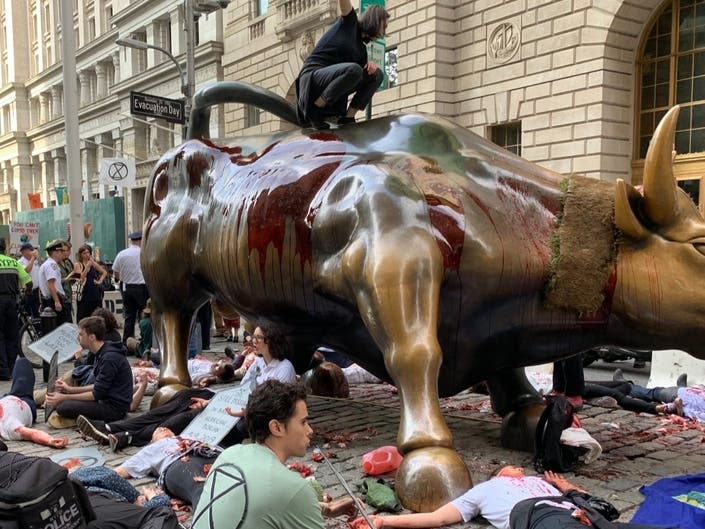 Cops cuffed 27 people during the demonstration in front of the Wall Street icon, which started about 11 a.m., the NYPD said. They will likely be charged with disorderly conduct, a police spokesperson said.

Dozens of protesters — some of them also covered with red paint — also blocked traffic farther up Broadway near Pine Street after splattering the statue in their bold effort to draw attention to the climate crisis.

“Denying it is — I’m not religious — but it’s sinful,” said Ben Watts, a protester from Brooklyn. “It’s totally immoral. I have a kid. The way it’s going, she may have no real future.”
The activist group Extinction Rebellion took credit for the protest, which drew more than 100 people to the Financial District. A video posted to Twitter shows an activist holding a flag emblazoned with the organization’s logo standing atop the bloodied bull.

“Financial sectors profit from ecocide, so we must rebel,” the group said on Twitter.

What are Extinction Rebellion’s key demands?

Who are Extinction Rebellion? A look at climate change activists protesting globally