The Norwegian energy giant on Thursday unveiled a new climate roadmap, including plans to rapidly grow its renewables fleet.

The cost of floating wind farms is on a steeper decline than that of traditional offshore wind, with the emerging sector increasingly attractive to oil and gas companies, said Sebastian Bringsværd, head of floating wind development at Norwegian energy giant Equinor.

After years of industry anticipation, the floating wind market is finally gaining momentum in a commercially meaningful way. The goal, Bringsværd said, is to scale floating projects up to a comparable level as traditional projects, which are often 500 megawatts or larger, taking advantage of offshore wind’s huge economies of scale.

Just a few years ago that was an “ambitious” vision,” Bringsværd said. “Now I see that’s very realistic.”

In its annual report released on Thursday, Equinor, among Europe’s largest oil producers, laid out a new climate roadmap to keep it in line with the Paris Climate Accord, including plans to transform into a “global offshore wind major.”

Equinor, among Europe’s largest oil producers, intends to grow its fleet of renewable energy projects tenfold by 2026, to 4-6 gigawatts, on the way to 12-16 gigawatts by 2035. The Norwegian company, majority owned by the government, also pledged to halve the carbon intensity of its energy products by 2050.

Within the renewables sphere, Equinor carved out an early leadership position in the emerging floating wind sector, completing the industry’s first full-scale project several years ago, the 30-megawatt Hywind Scotland.

ACS Group’s 50-megawatt Kincardine Bay floating project, also off the coast of Scotland, will go into operation later this year, setting a new industry benchmark. And Equinor recently gave the green light to its 88-megawatt Hywind Tampen project off the coast of Norway, which will power two of its drilling operations upon its scheduled completion in 2022.

Hywind Tampen is a “stepping stone,” Bringsværd said. “It’s providing the scale we need to prove the cost reduction curve — and it’s reducing our carbon footprint from our oil and gas production.”

While still a very expensive option for renewable power today, hovering around $250 per megawatt-hour by some estimates, floating turbines promise to unlock areas for wind development in waters too deep for regular monopile or jacket foundations. Among the technology’s obvious benefits is the ability for projects to tap the excellent wind resource often found far from shore while avoiding any visual impact from land.

In Hywind Scotland’s first two years of operation, it achieved a capacity factor of 56 percent. By comparison, the average for a U.K. offshore wind farm in 2018 was around 40 percent, according to government figures. Many onshore wind farms are at 30 percent or lower, and solar averages less than that.

“In terms of timing, we are more than 10 years behind [fixed bottom offshore wind]; in terms of costs, we’re ahead,” Bringsværd told GTM.

Equinor is also investing in traditional offshore wind, having last year won a contract for its 816-megawatt Empire Wind project in New York, as well as in onshore renewables. In its annual report released this week, Equinor said it plans to transform into a “global offshore wind major,” aiming for 12 to 16 gigawatts of installed renewable capacity by 2035.

Equinor is not alone among major energy companies in focusing on floating wind’s potential.

“Experienced developers are starting to position themselves more aggressively in the floating industry by forging alliances and building up floating wind pipelines,” Rolf Kragelund, director of global offshore wind at Wood Mackenzie, wrote this week.

Among the recent collaborations is WindPlus, which includes Repsol, Engie, EDP and floating wind technology firm Principle Power. Shell recently bolstered its capabilities with the acquisition of the floating wind developer Eolfi.

But there are signs the impasse is starting to break. The ScotWind seabed leasing round, out later this year, will include a carve-out for floating projects in Scottish waters, and broader momentum is building for the U.K. to do the same through its contracts for difference program.

France is backing floating wind projects in a dedicated tender, at least partially prompted by the need to quell local opposition to near-shore turbines.

Meanwhile, EDP and Norwegian oil services firm Aker are exploring the development of a 500-megawatt floating wind complex off the coast of Ulsan, South Korea. The City of Ulsan would cooperate with the development of a waterside supply chain base. Equinor is part of a consortium eyeing a 200-megawatt project, Donghae 1, in the same region, with a potential commissioning date of 2024.

The U.K., in particular, has advantages both in historical deployment and its native supply chain, Bringsværd said. The technology that underlies floating wind is not especially new, and many of the competencies are an even stronger match for the existing oil and gas supply chain than with fixed-bottom offshore wind, he said. SOURCE 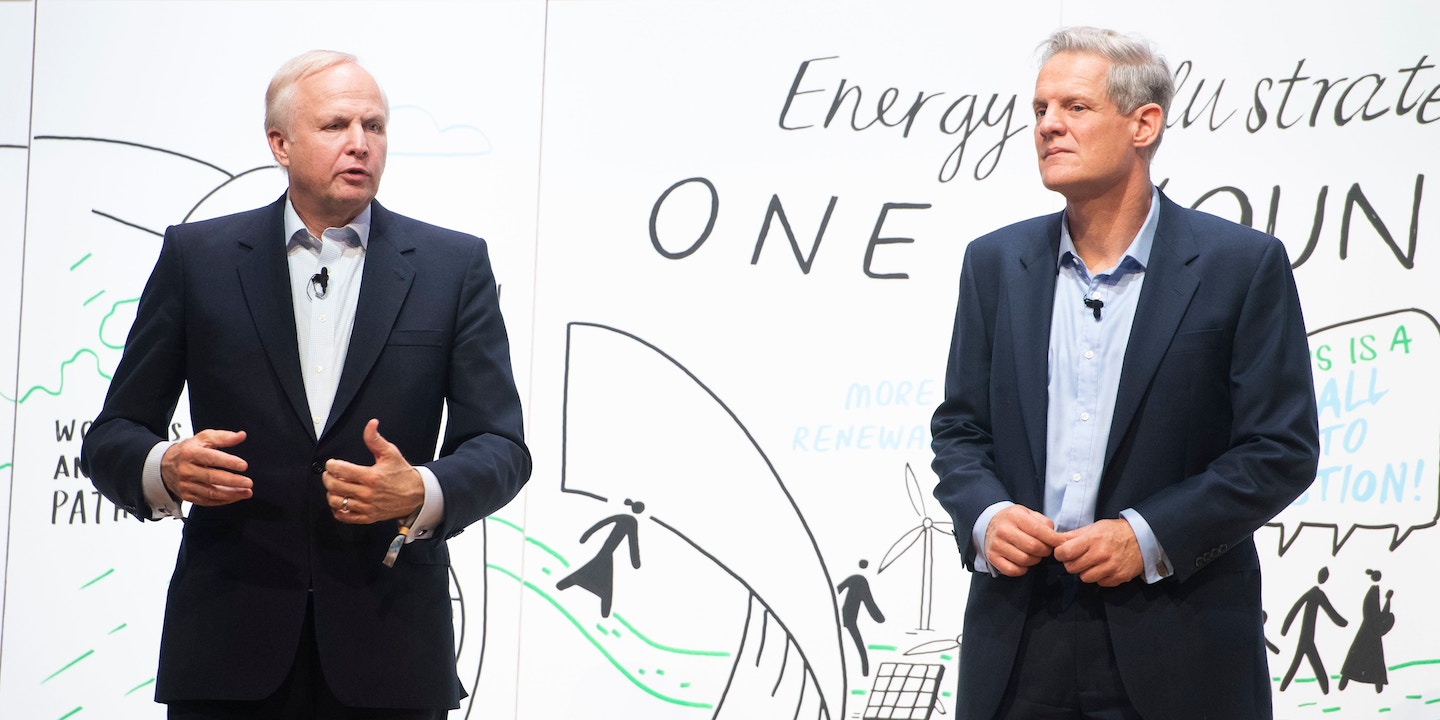 THE SAME DAY that 16-year-old climate activist Greta Thunberg gave a stirring speech at the United Nations Climate Action Summit in September, in which she criticized delegates for “stealing my dreams and my childhood with your empty words,” the architects of the climate crisis welcomed select youth participants from the summit to dine.

CEOs from fossil fuel corporations including BP, Royal Dutch Shell, and Norway’s Equinor were attending the annual gathering of the Oil and Gas Climate Initiative in New York, which includes industry leaders who claim to be committed to taking “practical” action on climate change. On the agenda for lunch was to “explore options for long-term engagement” with young people the industry could trust. Student Energy, a nonprofit based in Alberta, near Canada’s tar sands region, helped organize the event, which included time for students to grill the CEOs about their inaction on climate change.

Tension in the room was high, Student Energy’s executive director, 30-year-old Meredith Adler, told The Intercept. “The whole discussion started off with one of our participants talking about why youth don’t trust oil and gas companies,” she said. But by the end of the meeting, Adler tweeted that she was “very impressed” with OGCI. “I don’t feel they had all the answers or strong enough answers but they are really listening,” she wrote.

The students’ questions may have been tough, but the event was great PR for the fossil fuel industry. Gone are the days when CEOs openly questioned the existence of climate change. Today, industry leaders are feigning a sense of climate urgency while pushing forward proposals for climate action that will allow companies to keep harvesting carbon-emitting products well into the future. Subjecting themselves to a cohort of skeptical students was an opportunity for oil and gas executives to boost their credibility in an era when many young activists will only engage with them with picket signs.

Young activists say they’re seeing more of this “youth-washing” as the global youth climate movement gains momentum, including at the U.N. annual climate conference, known as COP 25, which is wrapping up in Madrid this week. With “youth” becoming synonymous with climate action, corporations and politicians are increasingly using young people to portray themselves as climate serious.

“There’s a real dangerous tokenism of youth for the benefit of public image.”

“The use of youth in campaigning is becoming more and more overt,” said 24-year-old Eilidh Robb, a member of the U.K. Youth Climate Coalition, who has been involved in pushing the U.N. to adopt a conflict of interest policy that would prevent fossil fuel industry representatives from exercising influence at COP. “There’s a real dangerous tokenism of youth for the benefit of public image.”

The OGCI gathering was a particularly egregious example of youth-washing. OGCI has provided funding to Student Energy, and OGCI ventures director Rhea Hamilton is on the group’s board of directors. Among the “partners” listed in Student Energy’s 2018 annual report are Royal Dutch Shell and Suncor, one of Canada’s biggest tar sands producers. Fossil fuel companies consistently fund the organization’s annual conference.

Although Student Energy’s leaders often echo the talking points of activists like Thunberg, the group’s membership — a network it claims includes 40,000 young people — is largely made up of people who want to work in the energy industry.

Student Energy is among the youth groups granted observer status at COP 25, meaning that its members can gain access to negotiation spaces, speak with the negotiating parties, and participate in events. Its presence at the U.N.’s international climate talks is only expected to grow. Student Energy’s 2018 report noted that the group had seen a 73 percent increase in active chapters. Next year, the oil and gas major BP has pledged to send 50 Student Energy delegates to COP26. The funding would double the size of the group’s usual delegation, according to a BP press release. In a conference space that serves as a battleground of ideas about how to address the climate crisis, BP apparently sees Student Energy’s presence as beneficial to the corporation. MORE