In an unprecedented move, the Dzawada’enuzw nation is claiming in court that farming Atlantic salmon — which often carry disease — in their traditional waters constitutes a violation of Aboriginal rights 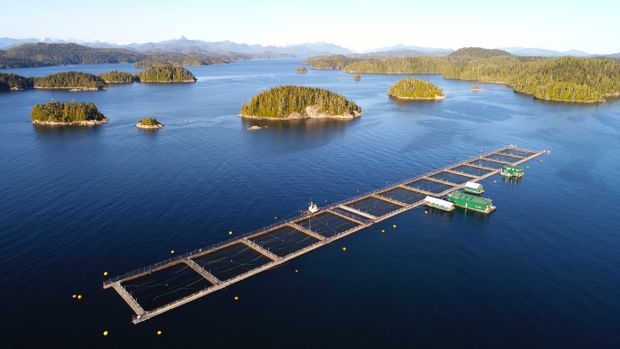 A salmon fish farm operates off the coast of the Broughton Archipelago near Vancouver Island. MYCHAYLO PRYSTUPA /THE GLOBE AND MAIL

Moon and other members of his community were in Vancouver Thursday to file an Aboriginal rights lawsuit against Canada that challenges federal fish farm licenses within their traditional territory in the Broughton Archipelago — the latest action in the nation’s escalating bid to revive shrinking Pacific salmon and eulachon stocks.

If successful, the lawsuit would not only close fish farms that affect the Dzawada’enuxw nation but could potentially be used by other First Nations to shut down salmon farms throughout B.C.’s coast, according to lawyer Jack Woodward, who is representing the Dzawada’enuxw [pronounced ‘tsa-wa-tay-nook’]. MORE