The party of Diefenbaker, Clarke and Mulroney is now acting like a right-wing fringe supporting vigilantism and racism.

The crises around the pipeline through Wet’suwet’en territory and the subsequent outpouring of support nationwide have isolated the Conservatives and placed them as the odd man out in the House of Commons.

On Tuesday, Prime MinisterJustin Trudeau’s speech was heckled by the Tories to the point that the speaker had to appeal for calm. When Conservative Leader Andrew Scheer spoke to rebut the prime minister’s comments, his speech was negative and clearly on the side of the pipeline developers. He called for the prime minister to end the pipeline protests and that the protesters should “check their privilege,” whatever that meant.

Meanwhile the other parties in the House including the Bloc Quebecois, the NDP and the Greens all supported the position that the government must proceed with dialogue and negotiations to settle the matter. They got together to discuss it further, but the Conservatives were not invited. It was obvious that Scheer would have nothing to offer and be a distraction.

The Conservatives’ position was clear: They wanted the government to take action to remove the blockades. While the Conservatives constantly refer to the rule of law, there is a long-standing practice in Canada that police forces are independent and not to be directed by politicians or a political party. To do otherwise would lead to a slippery slope toward a police state and totalitarianism.

Speaking of the rule of law, the Conservatives have ignored the fact that the Supreme Court has ruled that most of British Columbia has never been ceded by treaty and the title remains with the First Nations. In this case, the rule of law is on the side of the Wet’suwet’en.

West of Edmonton, a group of vigilantes took it upon themselves to take down a blockade of a railway right of way. This drew a tweet from Conservative leadership hopeful Peter MacKay, “Glad to see a couple Albertans with a pickup truck can do more for our economy in an afternoon than Justin Trudeau could do in four years.” This support for vigilantism was later taken down, but it is a reflection of the attitude that is prevalent in the Conservative camp.

Which leads me to ask, “What happened to the Conservatives?” The party of John Diefenbaker, Joe Clarke and Brian Mulroney is now acting like a right-wing fringe supporting vigilantism and racism. I doubt that those gentlemen would be welcome in today’s Conservative Party.

In the past, relations between the First Nations and the Conservative Party were usually positive. Mulroney supported the Treaty Land Entitlement Agreement for Saskatchewan which addressed a long-standing injustice over treaty land and was the largest land settlement in southern Canada.

Things changed for the worst in the 1980s and ’90s when the Reform Party came to prominence. It was a western-based party and its members discovered that attacking chiefs and First Nations was red meat to their base, so they pursued it. Rather than look at the potential of First Nations support, they chose to exploit us and our leadership.

Canada is a nation that is built on the rule of law and common sense. Before a railway could be built across the new nation, the government had to make treaty with the First Nations of the plains. This process stopped in the mountains because the American settlers in British Columbia refused to see the need to deal fairly with the First Nations.

Today Canada is paying the price and the politicians and those in power know it. Now Canada must make a modern-day treaty that is fair to all sides or we will continue to have confrontation and unrest as the people defend their land against outside development. SOURCE 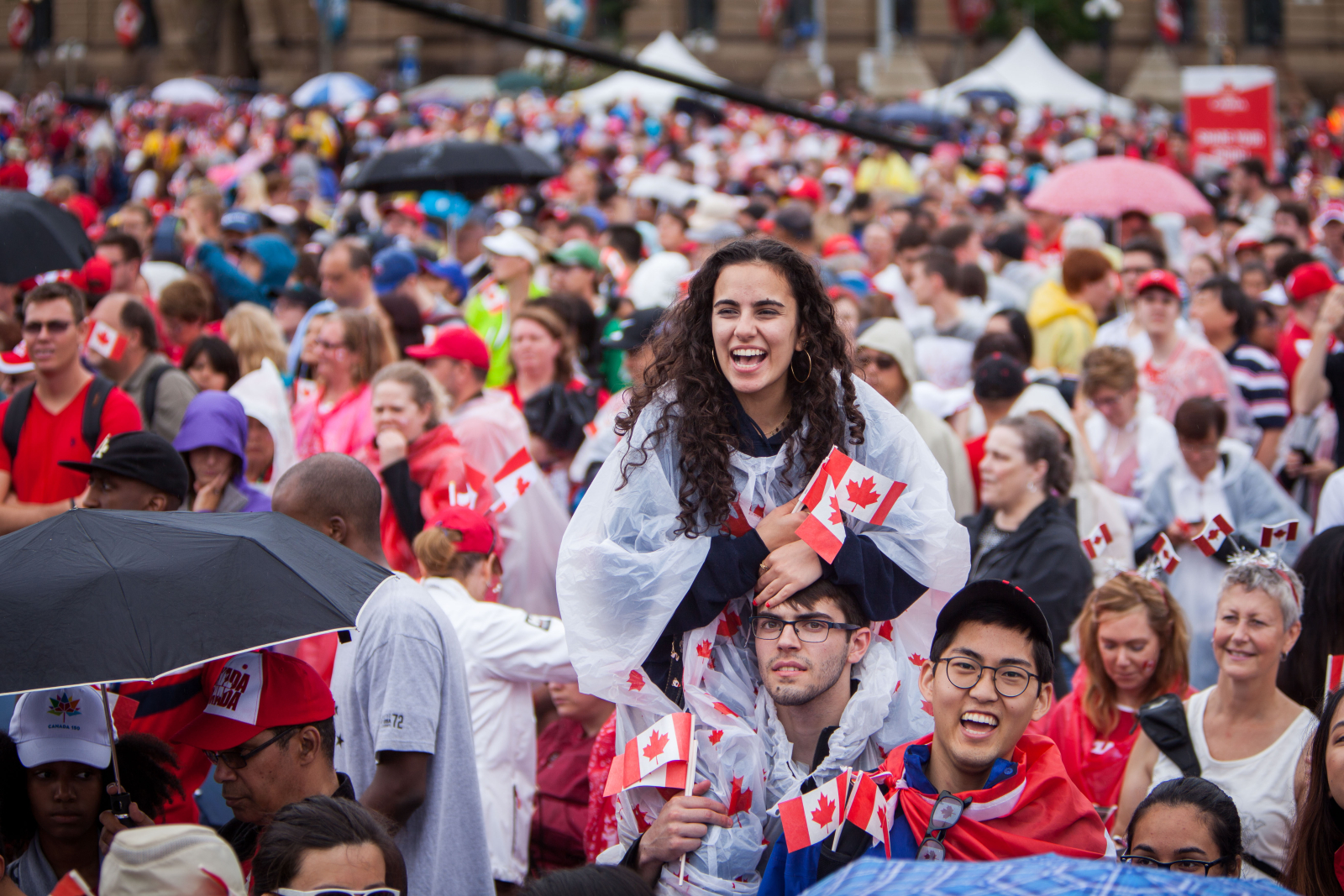 Canada 150 celebrations on Parliament Hill in Ottawa on July 1, 2017. Photo by Alex Tétreault

Conservatives and those with a dim economic outlook are more likely to view immigrants as “costly to society” than other Canadians, new research suggests.

Accurate information about the benefits of bringing in new residents, however, can change minds, according to the latest report from the Digital Democracy Project, a joint initiative by the Public Policy Forum and the Max Bell School of Public Policy at McGill University.

“Nativism — feelings of support for native-born citizens over immigrants — is more common among conservatives, but also among those who feel the economy or their personal finances are getting worse.”

The researchers measured “nativism” by asking a series of questions they said were designed to tap into perceptions of “whether immigrants are costly to society.”

They found Canadians broadly overestimate the number of migrants and refugees entering the country, with almost a quarter of those polled believing that refugee intake is higher than it really is.

“Nativism — feelings of support for native-born citizens over immigrants — is more common among conservatives, but also among those who feel the economy or their personal finances are getting worse,” says a new @ppforumca @MaxBellSchool report

Twenty-nine per cent of those surveyed said too many immigrants were from visible minorities. The authors noted they interpreted this number cautiously given a tendency for respondents to “provide answers that are socially acceptable but not a reflection of their true sentiment.”

The People’s Party of Canada — the leader of which, Maxime Bernier, has campaigned on allowing “fewer immigrants” into Canada — was not included in the examination of nativism. The report said the sample size was too small.

In asking respondents a series of questions about policy, researchers also found that Canadians were more often “uninformed” rather than “misinformed.”

Providing respondents with details of the economic benefits of immigration made people, particularly conservatives, more aware, and more supportive, they said. MORE

You are now able to easily compare climate change commitments on Shake Up the Establishment. You will want to bookmark this incredibly useful resource.

Four young Canadians are tracking the commitments of federal political parties on the climate crisis as campaigns rev up for the fall election.

Shake Up The Establishment is a website run by Manvi Bhalla, Janaya Campbell, Taro Halfnight and Cameron Fioret, all graduates or students of the University of Guelph.

The team will volunteer their time to help voters compare the environmental plans of the Liberals, Conservatives, New Democratic Party and Greens ahead of the election that is to be held on or before Oct. 21, 2019.

“We were all discussing how we would want to vote in the upcoming election,” said Bhalla, who studied biomedical science, and has researched at the Hospital for Sick Children and worked as president of the local chapter of Oxfam Canada, in a phone interview May 26.

“We didn’t actually know who the best candidate or party would be immediately. And we thought, if we felt this way, then other individuals also might feel this way.” MORE