Pipeline will complicate any discussion on a coalition, informal or otherwise, with the NDP

(Bloomberg) — Canadian Prime Minister Justin Trudeau is losing support for a plan to expand the Trans Mountain oil pipeline, raising the stakes for his government as the project navigates continued legal challenges.

About 37% of Canadians oppose the government-owned project, up from 31% in June, according to a poll published Tuesday by the Angus Reid Institute. Backing for the pipeline is at 55%, down from 58%, the survey showed.

Canada’s C$4.5 billion ($3.4 billion) purchase of Trans Mountain in 2018 has been a political quagmire for Trudeau, costing him support among his environmentalist base while winning him little favor with voters in conservative, oil-rich Alberta. The poll suggests that even if Trudeau overcomes legal hurdles, the project will remain a dilemma for his government, with opposition escalating largely in strongholds for his Liberal party.

The expansion would almost triple to 890,000 barrels a day the shipping capacity on the line, which travels from Edmonton to a port terminal near Vancouver. Canada’s oil industry considers the project key to developing new markets for its crude in Asia and reducing its dependence on U.S. refiners. Environmentalists say the expansion would allow for increased oil-sands output, contributing to the threat of catastrophic climate change and preventing Canada from meeting its greenhouse gas reduction commitments.

Trans Mountain won a major battle earlier this month, when the Supreme Court of Canada dismissed a case against the line. But it still faces a court challenge in British Columbia that’s centered on whether Trudeau’s government adequately consulted with indigenous groups along the pipeline route.

The Angus Reid poll of 1,528 Canadian adults was conducted online from Jan. 21 through Jan. 23, with a margin of error of plus of minus 2.5 percentage points. SOURCE SURREY, B.C.— NDP Leader Jagmeet Singh tried to strike a precarious balance Sunday between his opposition to the Trans Mountain pipeline and the mounting possibility of a coalition with Justin Trudeau’s Liberals.

Singh is drawing a firm line: he said he will do whatever it takes — including a possible coalition with the Liberals — to keep the Conservatives from forming a government.

But he walked a finer line when pressed Sunday on whether, if the NDP did find itself holding the balance of power after Oct. 21, the Trans Mountain pipeline project would scuttle any co-operation with Trudeau and his MPs.

“I am firmly opposed to the pipeline. I’ve been opposed to it. I will continue to fight against it and it’s absolutely one of my priorities,” Singh told a crowd of supporters in Surrey B.C.

“I won’t negotiate a future government right now, but I will tell people what my priorities are and absolutely my priority is to fight that pipeline.”

Singh offered a first glimpse of the possibility of leaving the door open to working with the Liberals — in spite of his strong stance against the pipeline — following the French debate earlier this week. Since the Liberals had already purchased the pipeline, he said, he would “work on ensuring that we are as responsible as possible with moving forward with an asset that I would not have bought.”

Singh is also walking a political tightrope when it comes to where he currently stands on liquefied natural gas (LNG) development in B.C.

A single protester disrupted the beginning of his rally Sunday, shouting obscenities at the NDP leader and voicing his opposition to the $40 billion LNG project in northern British Columbia.

The project will see LNG Canada export natural gas obtained by fracking. It has the support of the provincial NDP government in B.C.

In January, Singh voiced support for the project. But several months later, not long after the NDP suffered a byelection defeat at the hands of the Greens in the riding of Nanaimo-Ladysmith, he came out against fracking — a position he reiterated Sunday.

Asked for his current position on the project, Singh sidestepped the question, saying only that he supports the B.C. government’s plans to reduce emissions as the “most ambitious climate action plan in North America.” MORE

Polls suggest a minority government, but we need a full coalition. 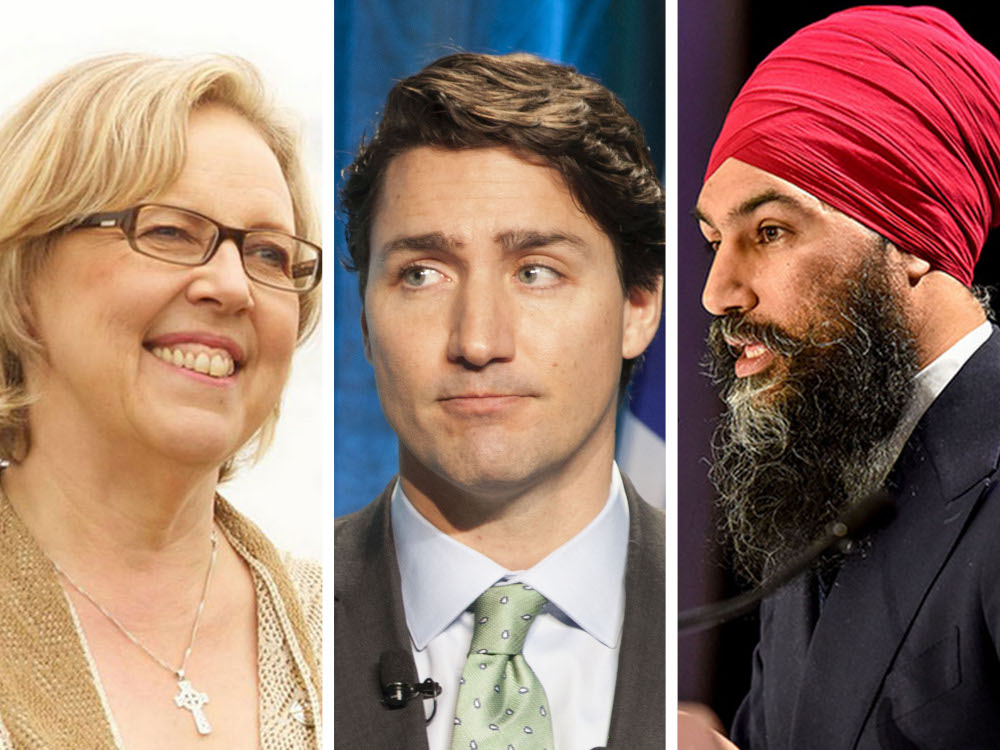 A recent EKOS poll shows a Canada that, like much of the Western world, doesn’t know quite what to do or where to go.

But it also showed a way for us to get through our current whitewater politics, if enough of us are paddling in the same direction.

The poll is dated June 17, 124 days before the federal election. If a week is an eternity in politics, over 17 eternities lie between the poll and E-day, and this is just one poll out of many. Still, its findings raise some very interesting possibilities.

EKOS finds the Liberals supported by 30.1 per cent of the electorate, with the Conservatives at 34.2. Strikingly, the New Democrats are “moribund” at 12 per cent, trailing the Greens’ 13.2 per cent. The Bloc Québécois and Maxime Bernier’s People’s Party are both at 4.0.

Let’s do a thought experiment. It’s after the election. Green Leader Elizabeth May and NDP Leader Jagmeet Singh hold the balance of power.

They could keep at arm’s length from the Liberals, setting conditions for their support on confidence votes just as Andrew Weaver has with John Horgan here in B.C. The Liberals could govern very cautiously while taking flak from their allies as well as Andrew Scheer’s Conservatives.

Or May and Singh could have a quiet word with Trudeau the day after the election: “You’ve already declared a climate emergency. If you’re willing to treat it as a real emergency, we’re prepared to form an emergency coalition government with you, and stick with you until 2023.”

It would be a high price for Trudeau: a serious program to slow the climate crisis would include writing off the oil sands and cancelling the expanded Trans Mountain pipeline. What’s more, Greens and New Democrats would be in the coalition cabinet. Alberta Premier Jason Kenney and his Prairie backers would erupt with threats of separatism.

But an emergency coalition government could spike Kenney’s cannons and win over key Conservative groups. For example, the EKOS poll finds 42 per cent of those over 65 are Conservative supporters. Bring in pharmacare and other senior-support programs and woo them away. MORE