Feat could turn bacteria into biological factories for energy and even food. 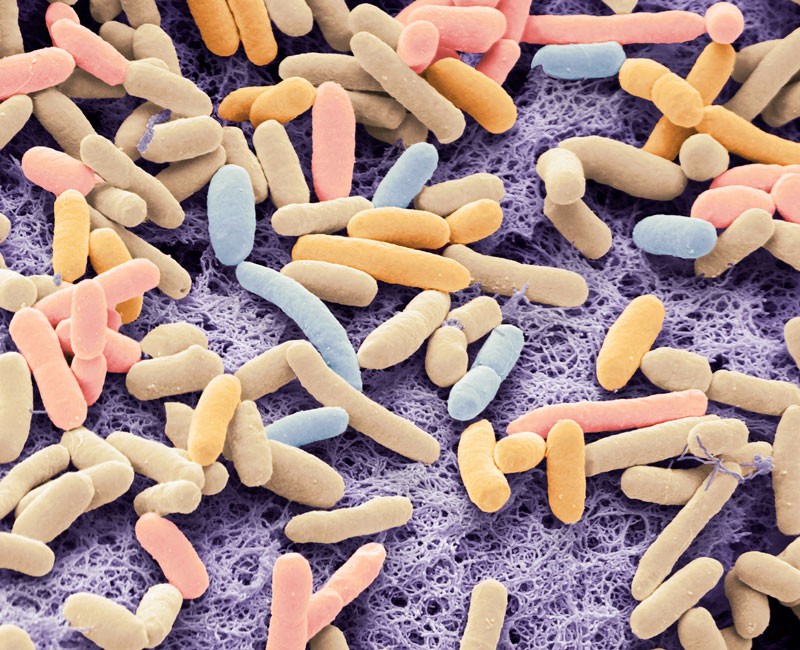 The bacterium Escherichia coli has been engineered to grow by consuming carbon dioxide.Credit: Steve Gschmeissner/SPL

E. coli is on a diet. Researchers have created a strain of the lab workhorse bacterium — full name Escherichia coli — that grows by consuming carbon dioxide instead of sugars or other organic molecules.

The achievement is a milestone, say scientists, because it drastically alters the inner workings of one of biology’s most popular model organisms. And in the future, CO2-eating E. coli could be used to make organic carbon molecules that could be used as biofuels or to produce food. Products made in this way would have lower emissions compared with conventional production methods, and could potentially remove the gas from the air. The work is published in Cell1 on 27 November.

“It’s like a metabolic heart transplantation,” says Tobias Erb, a biochemist and synthetic biologist at the Max Planck Institute for Terrestrial Microbiology in Marburg, Germany, who wasn’t involved in the study.

Plants and photosynthetic cyanobacteria — aquatic microbes that produce oxygen — use the energy from light to transform, or fix, CO2 into the carbon-containing building blocks of life, including DNA, proteins and fats. But these organisms can be hard to genetically modify, which has slowed efforts to turn them into biological factories.

By contrast, E. coli is relatively easy to engineer, and its fast growth means that changes can be quickly tested and tweaked to optimize genetic alterations. But the bacterium prefers to grow on sugars such as glucose — and instead of consuming CO2, it emits the gas as waste.

Ron Milo, a systems biologist at the Weizmann Institute of Science in Rehovot, Israel, and his team have spent the past decade overhauling E. coli’s diet. In 2016, they created2 a strain that consumed CO2, but the compound accounted for only a fraction of the organism’s carbon intake — the rest was an organic compound that the bacteria were fed, called pyruvate.

In the latest work, Milo and his team used a mix of genetic engineering and lab evolution to create a strain of E. coli that can get all its carbon from CO2. First, they gave the bacterium genes that encode a pair of enzymes that allow photosynthetic organisms to convert CO2 into organic carbon. Plants and cyanobacteria power this conversion with light, but that wasn’t feasible for E. coli. Instead, Milo’s team inserted a gene that lets the bacterium glean energy from an organic molecule called formate.

Even with these additions, the bacterium refused to swap its sugar meals for CO2. To further tweak the strain, the researchers cultured successive generations of the modified E. coli for a year, giving them only minute quantities of sugar, and CO2 at concentrations about 250 times those in Earth’s atmosphere. They hoped that the bacteria would evolve mutations to adapt to this new diet. After about 200 days, the first cells capable of using CO2 as their only carbon source emerged. And after 300 days, these bacteria grew faster in the lab conditions than did those that could not consume CO2.

The CO2-eating, or autotrophic, E. coli strains can still grow on sugar — and would use that source of fuel over CO2, given the choice, says Milo. Compared with normal E. coli, which can double in number every 20 minutes, the autotrophic E. coli are laggards, dividing every 18 hours when grown in an atmosphere that is 10% CO2. They are not able to subsist without sugar on atmospheric levels of CO2 — currently 0.041%.

Milo and his team hope to make their bacteria grow faster and live on lower levels of CO2. They are also trying to understand how the E. coli evolved to eat CO2: changes in just 11 genes seemed to allow the switch, and they are now working on determining how.

The work is a “milestone” and shows the power of melding engineering and evolution to improve natural processes, says Cheryl Kerfeld, a bioengineer at Michigan State University in East Lansing and the Lawrence Berkeley National Laboratory in California.

Already, E. coli is used to make synthetic versions of useful chemicals such as insulin and human growth hormone. Milo says that his team’s work could expand the products the bacteria can make, to include renewable fuels, food and other substances. But he doesn’t see this happening soon.

“This is a proof-of-concept paper,” agrees Erb. “It will take a couple years until we see this organism applied.” SOURCE