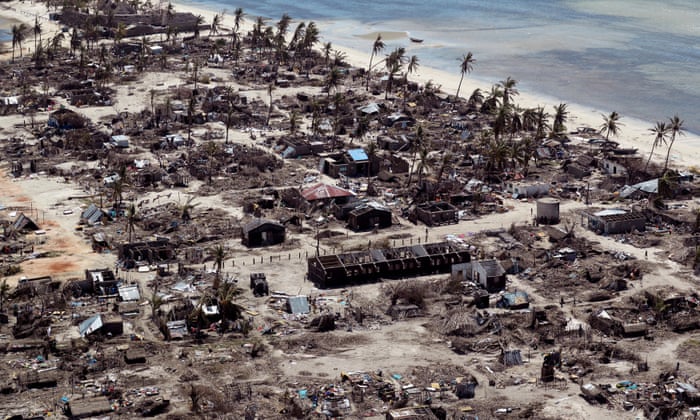 Aftermath of the damage left by Cyclone Kenneth in a village north of Pemba, Mozambique in May. Photograph: Mike Hutchings/Reuters

Climate crisis disasters are happening at the rate of one a week, though most draw little international attention and work is urgently needed to prepare developing countries for the profound impacts, the UN has warned.

Catastrophes such as cyclones Idai and Kenneth in Mozambique and the drought afflicting India make headlines around the world. But large numbers of “lower impact events” that are causing death, displacement and suffering are occurring much faster than predicted, said Mami Mizutori, the UN secretary-general’s special representative on disaster risk reduction. “This is not about the future, this is about today.”

This means that adapting to the climate crisis could no longer be seen as a long-term problem, but one that needed investment now, she said. “People need to talk more about adaptation and resilience.”

Estimates put the cost of climate-related disasters at $520bn a year, while the additional cost of building infrastructure that is resistant to the effects of global heating is only about 3%, or $2.7tn in total over the next 20 years.

Mizutori said: “This is not a lot of money [in the context of infrastructure spending], but investors have not been doing enough. Resilience needs to become a commodity that people will pay for.” That would mean normalising the standards for new infrastructure, such as housing, road and rail networks, factories, power and water supply networks, so that they were less vulnerable to the effects of floods, droughts, storms and extreme weather. MORE