“There is nothing more inconvenient than being hit by a Category 5 hurricane, by having a wildfire raze your town.”

As Extinction Rebellion activists in London on Wednesday ramped up their latest mobilization with a tenth consecutive day of action, author Naomi Klein pushed back against criticism of the climate protesters and said the climate crisis itself is what’s truly disruptive.

In an interview with Sky News presenter Adam Boulton posted Wednesday, Klein refuted the notion that “a lot of action” to address the climate crisis is “being taken by politicians,” saying their lack of sufficient action is what has drawn youth climate and Extinction Rebellion activists into the streets across the world in recent weeks.

“If standing up against the climate and ecological breakdown and for humanity is against the rules, then the rules must be broken.”
—Greta ThunbergThe interview came as the global mobilization—which has blocked major roads and bridges in their bid to demand greenhouse gas emissions go down to net zero by 2025—staged a number of actions on Wednesday in defiance of a London-wide ban.

Extinction Rebellion has also announced that several affinity groups plan to disrupt Tube services on Thursday. “In any other circumstances,” the group said in a statement, “these groups would never dream of disrupting the Tube but this is an emergency.”

Boulton, in his interview with Klein, said the climate activists put others in a position such that their “route to work is being obstructed” and said XR was “trying to shut down the Tube system.”

“Yes, it’s inconveniencing people,” said Klein. “As somebody who has covered natural disasters that are fueled by climate change for 15 years—there is nothing more inconvenient than being hit by a Category 5 hurricane, by having a wildfire raze your town.”

“Let me tell you how inconvenient it is for the people in Paradise, California, 14,000 of whom lost their homes,” she continued. “Climate change is really, really inconvenient. And so if people have to deal with this inconvenience of some protests in London to get the attention of politicians who have been focused on a singular way on the emergency of Brexit, then so be it.”

The author and activist argues that the impact of climate change is more “inconvenient” than the group’s protests.

London Metropolitan Police this week issued an order banning “any assembly linked to the Extinction Rebellion ‘Autumn Uprising'” within city.

One of Wednesday’s actions was a “people’s assembly” in Trafalgar Square in which roughly 2,500 activists gathered to strategize responses to what they say is the government’s continued inaction on the climate crisis. Among those in the square detained by police was journalist and activist George Monbiot:

There must be 2500 people at least now in Traf Square.
All breaking the law, according to the police here.
But the Sun’s out.
Our numbers are growing by the minute.
We are#ExtinctionRebellion.
And the Government has lost the high ground to us – by trying to ban us…
Pse RT! pic.twitter.com/liVvgUg1j8 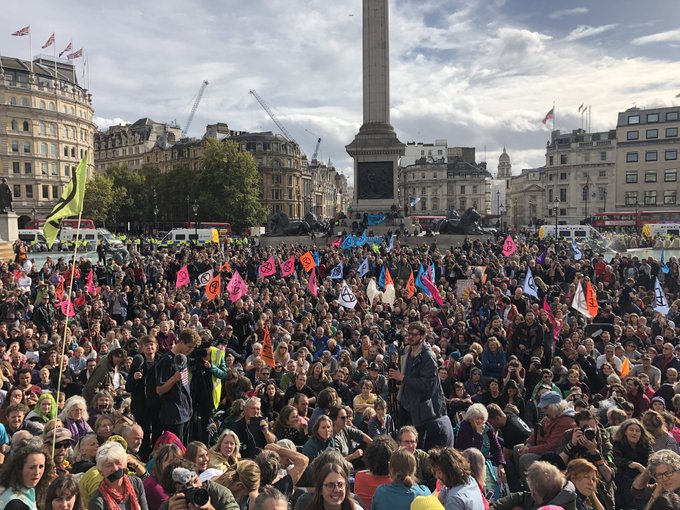