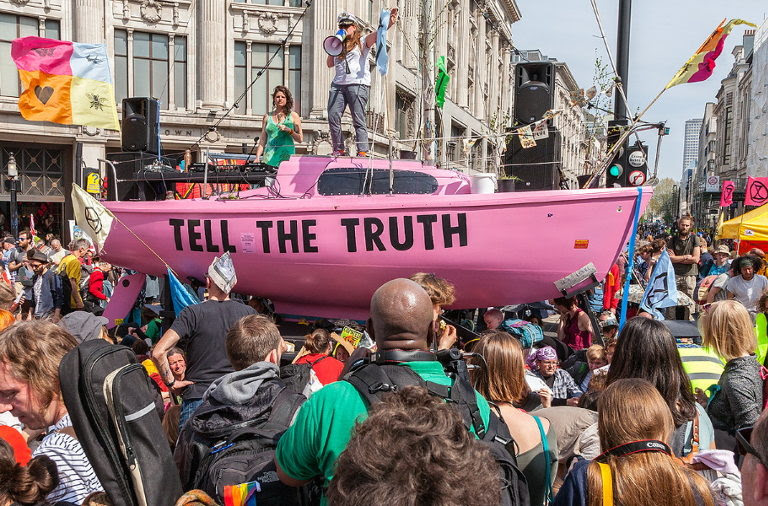 Extinction Rebellion at Oxford Circus. By Mark Ramsay, under a CC BY 2.0 license

Extinction Rebellion (XR) is many things at once: a hopeful mass movement; a commuter’s nightmare; a source of inspiration; an apocalyptic kick up the arse. Within the UK climate movement, it has become a Rorschach test. For some, its shock doctrine ethos flirts with eco-fascism. For others, the actions have become their life’s calling. This Is Not A Drill has been written to clarify, inform, inspire and equip the people who are undecided yet interested in moving deeper into the climate action zeitgeist XR has ingeniously catalysed.

The book is loud and proud. Its hot pink cover is impossible to ignore, and pages of the text are dedicated to vivid woodcut imagery and all-caps messages. The book contains a wealth of essays, anecdotes, and advice. All are short and generally unfussy: no footnotes here. They are written by people from a variety of backgrounds, united through their concern over climate breakdown. An Indian farmer and a Californian firefighter offer their perspectives; individuals working in academia, climate science, politics and other fields weigh in too. These include Mohamed Nasheed, the former president of the Maldives; psychotherapist Susie Orbach; Hindou Oumarou Ibrahim, an indigenous rights campaigner from the Mbororo community in Chad; and visionary economist Kate Raworth, among many others.

Notably, XR is working to develop a deeper understanding of climate justice and the causes of climate breakdown. The Indian environmental activist Vandana Shiva writes a powerful foreword stating explicitly that ‘ecocide and genocide are one indivisible process’, pointing to colonialism’s ravaging motive by quoting US President Andrew Jackson’s 1833 call for ‘a superior race’ to triumph over native people in America. She and other contributors make it clear that colonialism and capitalism comprise a pincer movement that is destroying life as we know it. This lays important foundations for conversations about what an ecologically healthy and socially just future needs to consign to history.

These big global overviews of climate breakdown and its impact on different communities are salutary reads for any reader. The more practical pieces that explore the logistics of effective direct action are excellent too. One, ‘Cultural Roadblocks’, shares the story behind how XR sourced a boat for activism purposes, and it conveys the mix of determination, absurdity, effort and camaraderie that collective action can involve. From branding textiles, to befriending journalists, to cooking on-site meals that won’t give everyone food poisoning, the best of these chapters share the qualities of being informal, smart, and motivating.

There is unexplored tension in the text. Horizontal self-organising is recommended throughout, yet the encouraged action, reiterated through a number of chapters, remains bafflingly prescriptive: disrupt transport in capital cities. Blocking bridges is a tactic, but is it the only option? According to This Is Not A Drill, it would seem so. The roots to this strategy can be found in the chapter written by XR co-founder Roger Hallam, where he states that disrupting cities is the only option: ‘That’s just the way it is.’ Martin Luther King and Mohandas Gandhi, effective civil rights leaders whose work Hallam cites elsewhere, might have disagreed with this dogma; the Salt Marches in India and the Selma to Montgomery marches in the US, for example, were pivotal to their respective causes.

It’s worth noting that Hallam has form in presenting opinion as fact. When interviewed on the Politics Theory Other podcast, he was challenged on the claim that ‘most prison officers are black’, which appeared in the (now-deleted) XR prison handbook. Hallam doubled down on the claim, saying, ‘That’s just an empirical fact. I mean, I’ve been to prison several times and that’s the fact of the matter.’ Given that, in reality, over 94 per cent of all UK prison officers are white, it seems wise to take Hallam’s other ‘empirical facts’ with a pinch of salt, city roadblocks as a means to liberation for all being one of the them. MORE

Since the UN Report on Climate Change said we have 12 years to keep carbon emissions at 1.5 degrees C above pre industrial levels, the fact that mainstream media is finally catching up on the discussion (long overdue) of this existential emergency is a good sign, especially if journalists start to critically analyze and expose fossil fuel industry misinformation. 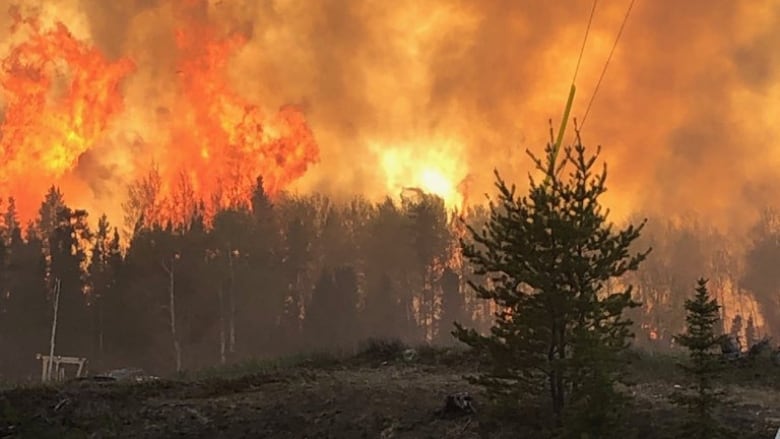 Scientists say that wildfires, such as this one near Sioux Lookout, Ont., are exacerbated by climate change. (Bernie Hawryluk)

What’s in a word? Or a phrase? A lot. Take a quick scan of your social media or news feed and it’s clear that words matter. They can affect our actions and how we feel.

The debate over the environment and climate change can be especially heated.

The British newspaper the Guardian triggered a discussion recently after it announced changes to the way it describes climate change in its reporting. The nearly 200-year-old publication updated its style guide, and now refers to what’s happening to our planet as a “crisis.”

“‘Climate change’ is no longer considered to accurately reflect the seriousness of the situation; use climate emergency, crisis or breakdown instead,” reads the updated guide.

The Guardian’s editor-in-chief, Katharine Viner, explained that it was also time to do away with such niceties as “global warming,” which is being replaced, in most instances, with “global heating.” 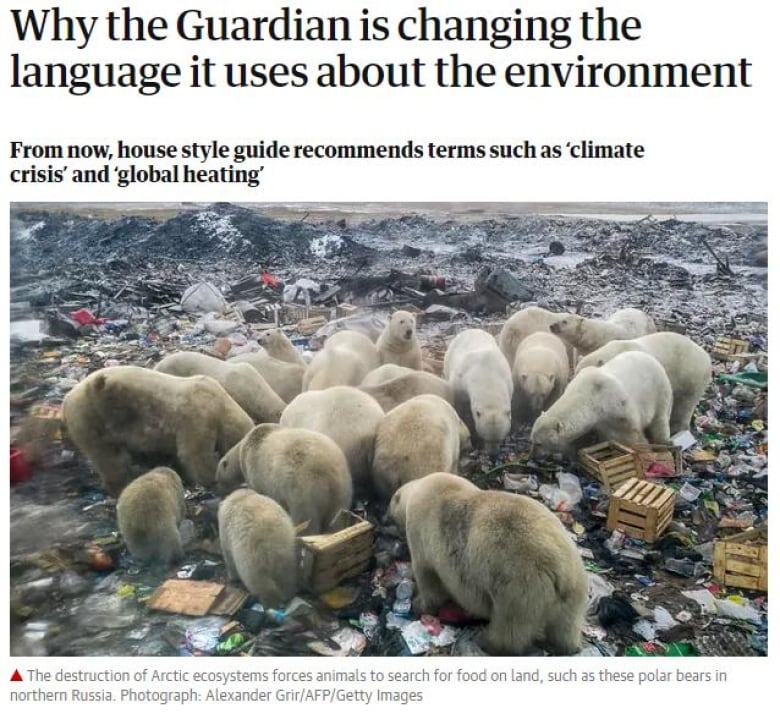 “We want to ensure that we are being scientifically precise, while also communicating clearly with readers on this very important issue,” said Viner. “The phrase ‘climate change,’ for example, sounds rather passive and gentle when what scientists are talking about is a catastrophe for humanity.”

It’s something Sean Holman, a Calgary journalism professor, has been thinking about for a while. He wrote an open letter to editors and journalism associations chiding reporters for failing to properly report on the “crisis” shortly after the Guardian made the change.

“This letter is aimed at basically us, you and me, journalists across the country whose job it is to provide the public with the truth more than anything else,” said Holman. “We know that climate change, the climate crisis, is causing a lot of what we are seeing now and we need to be clearer with our audiences about that, because, really, no one else will.” MORE

Extinction Rebellion is an international protest group that uses non-violent civil disobedience to campaign on environmental issues. Demonstration have included blocking bridges to traffic in London and a semi-naked protest inside the House of Commons. The group says climate breakdown threatens all life on Earth, and so it is rebelling against politicians who ‘have failed us’, to provoke radical change that will stave off a climate emergency.

Unlike many other Canadian cities, Prince Edward County Council has yet to announce a climate emergency. 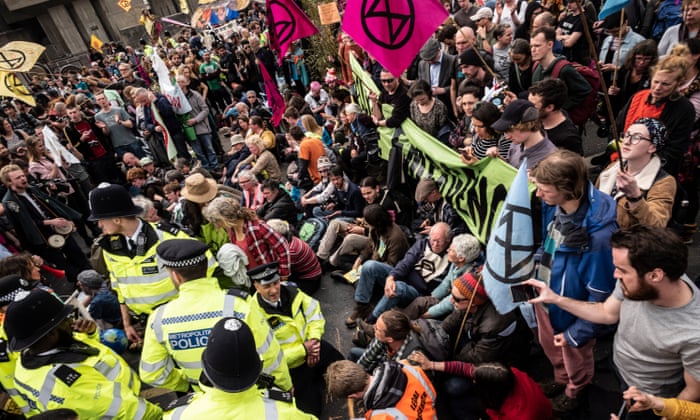 Hundreds of people had occupied the crossing and three other sites in the capital since Monday morning.

Over Monday night, officers tried to clear the bridge, arresting 113 people, but the blockade remained in place. Just after 12.30pm on Tuesday, officers moved in again and began to carry people away.

The protests are part of a global campaign organised by the British climate group Extinction Rebellion, with demonstrations planned in 80 cities across 33 countries in the coming days.

The group has called on the UK government to reduce carbon emissions to zero by 2025 and establish a citizens’ assembly to devise an emergency plan of action to tackle climate breakdown and biodiversity loss. MORE

Only rebellion will prevent an ecological apocalypse

What are Extinction Rebellion protesting about? The climate change group causing chaos in London

Language is crucial to how we perceive the natural world. Help me to find better ways of describing nature and our relationships with it so we can better defend it 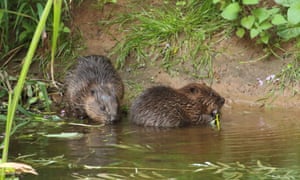 Beavers in the river Otter in Devon. ‘Our awe of nature, and the silence we must observe to watch wild animals, hints at the origins of religion.’ Photograph: Mike Symes/ Devon Wildlife Trust

If Moses had promised the Israelites a land flowing with mammary secretions and insect vomit, would they have followed him into Canaan? Though this means milk and honey, I doubt it would have inspired them.

So why do we use such language to describe the natural wonders of the world? There are examples everywhere, but I will illustrate the problem with a few from the UK. On land, places in which nature is protected are called “sites of special scientific interest”. At sea, they are labelled “no-take zones” or “reference areas”. Had you set out to estrange people from the living world, you could scarcely have done better. MORE