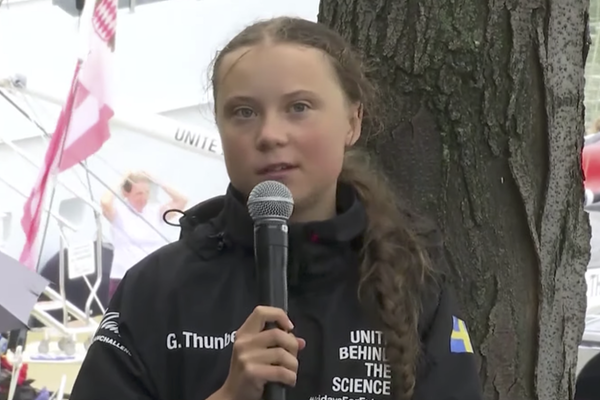 The planet continues to fry. Yet, America is pumping more fossil fuel than it has in decades. And the U.S. government does nothing to slow the damage. Just the opposite — Washington is now promoting oil, gas and coal while attacking clean energy.

We’ve fought against climate change for at least thirty years. Yet, it seems that activists have failed to reverse or even slow the flow of the greenhouse pollution that’s destroying the world’s climate.

Why has it taken so long for the climate movement to accomplish so little? And, since the clock is ticking to curb runaway global heating, how can we do better in the future?

To answer these questions, leaders in the fight against climate change from Al Gore to Bill McKibben to Naomi Klein have gone back to history.

They’ve compared today’s campaign to cut greenhouse gas pollution to the trans-Atlantic movement in the nineteenth century to abolish slavery.

It’s about politics, not science.

The idea is that fighting climate change today is going to be as hard politically as it was to free millions of enslaved people in the nineteenth century. So, we should accept just how big a political and social movement we’ll need to save our climate. And then we should learn how the abolition movement attacked the equally big problem of slavery in the past–and how they won against great odds.

For example, in This Changes Everything, Klein writes that abolition was a social movement that “succeeded in challenging entrenched wealth in ways that are comparable to what today’s movements must provoke if we are to avert climate catastrophe”:

The movement for the abolition of slavery in particular shows us that a transition as large as the one confronting us today has happened before — and indeed it is remembered as one of the greatest moments in human history. The economic impacts of slavery abolition in the mid-nineteenth century have some striking parallels with the impacts of radical emission reduction.

Klein recommends a 2014 essay by MSNBC on-air personality Chris Hayes, “The New Abolitionism: Averting planetary disaster will mean forcing fossil fuel companies to give up at least $10 trillion in wealth,”

I agree that Hayes’ essay is brilliant and that it should be required reading for anyone who cares about the climate crisis. So let me summarize his argument in some detail below on the assumption that it’s well worth hearing what Hayes has to say.

So Much Goddamn Money

Unlike famous social movements in American history such as women’s suffrage or LGBTQ rights, abolition was about much more than religious values or personal prejudices about people who seemed different from the dominant norm.

For Hayes, what makes climate change much harder to deal with than other social issues is the amount of money that powerful people would stand to lose by abolishing fossil fuels. This makes them fight harder against outlawing their product, just as southern slaveholders fought hard against abolition in the nineteenth century.

When it comes to political economy, abolition was about very big money. That’s the problem.

“So much goddamn money,” as Hayes puts it. Since abolishing fossil fuels is also about very big money, Hayes contends that it’s “impossible to point to any precedent other than abolition”:

The leaders of slave power were fighting a movement of dispossession. The abolitionists told them that the property they owned must be forfeited, that all the wealth stored in the limbs and wombs of their property would be taken from them. Zeroed out. Imagine a modern-day political movement that contended that mutual funds and 401(k)s, stocks and college savings accounts were evil institutions that must be eliminated completely, more or less overnight. This was the fear that approximately 400,000 Southern slaveholders faced on the eve of the Civil War.

“Power concedes nothing without a demand. It never did and it never will.” — abolitionist Frederick Douglass

Hayes estimates the value of slave “property” (it’s obscene to refer to human beings as property today, but that was indeed the issue to slaveowners in the nineteenth century) at $10 trillion in today’s money. Just before the Civil War, that represented 16% of the total value of the U.S. economy and fully 50% of the economy in the southern states.

Keep It in the Ground

To have any hope of a livable world in the future, according to Bill McKibben’s calculations in “Global Warming’s Terrifying New Math,” the world’s governments must limit average worldwide temperature increases to 2 degrees Celsius (3.6 degrees Fahrenheit). McKibben published those numbers in 2012, and things have gotten worse since then.

Even more so today, to hope to keep the climate under any safe limit of temperature rise, most of the remaining known fossil fuel reserves around the world will have to remain in the ground, unburned. In 2012, McKibben estimated 80%. Today, the number will surely be higher. Whatever your figure, asking oil, gas and coal companies to take most of their product off the market is going to be a very hard sell, as Hayes explains:

Proceeding from this fact, McKibben leads us inexorably to the staggering conclusion that the work of the climate movement is to find a way to force the powers that be, from the government of Saudi Arabia to the board and shareholders of ExxonMobil, to leave 80 percent of the carbon they have claims on in the ground. That stuff you own, that property you’re counting on and pricing into your stocks? You can’t have it. MORE

Averting planetary disaster will mean forcing fossil fuel companies to give up at least $10 trillion in wealth.