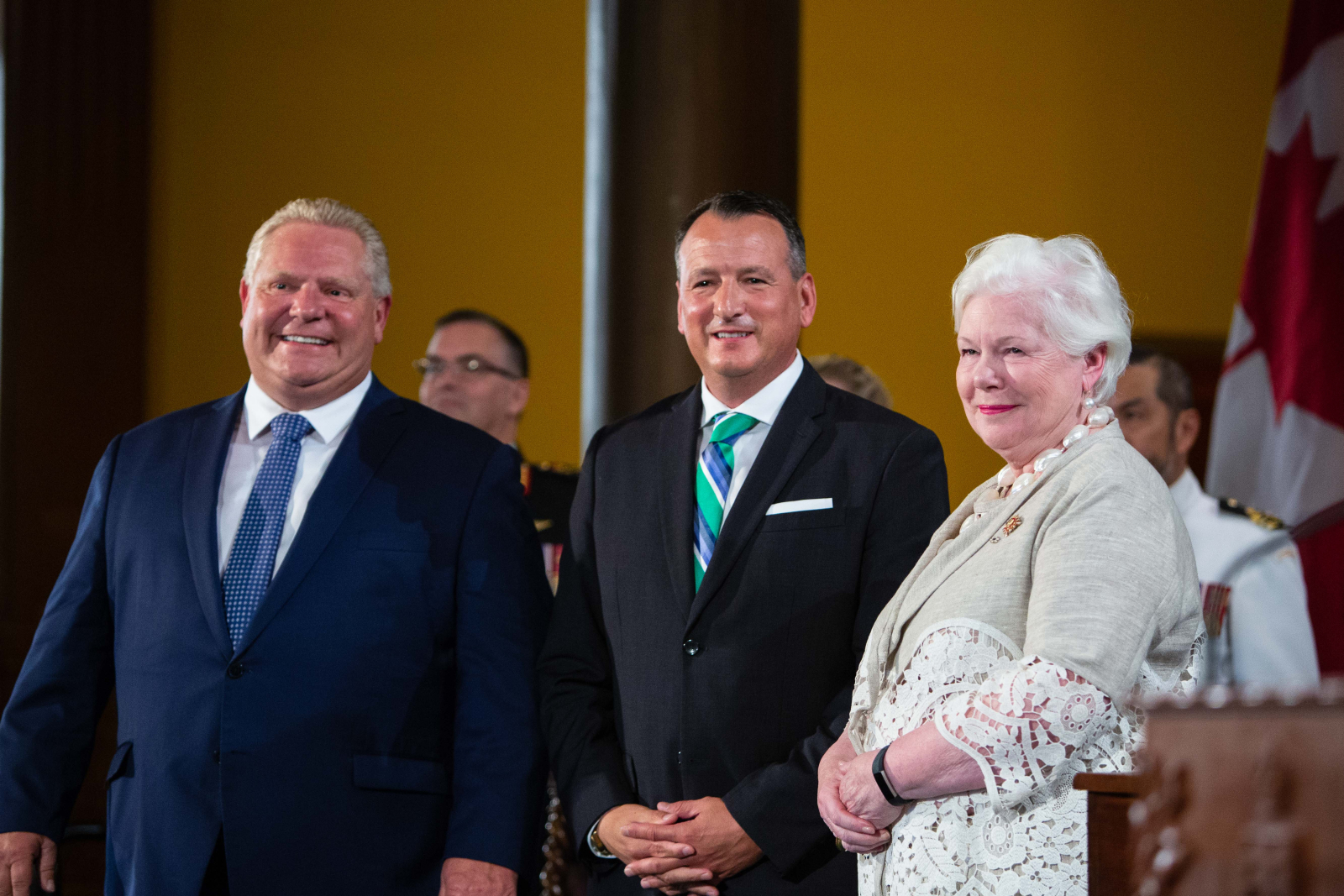 The Pickering nuclear power plant is already operating beyond the terms of its natural life. Critics warn that the Ford government’s move to eke out a little bit more power from the site is playing with fire.

Energy Minister Greg Rickford said on Tuesday that Ontario Power Generation, the provincial agency that operates the site, had proposed keeping four of its six operational reactors going for one year past the already-extended deadline of 2024.

But critics warn that even one extra year of operations at the site is a risky undertaking.

“They are already skating on thin ice, and this is only going to make it even thinner ice,” said Gordon Edwards, a scientist and the founder of the Canadian Coalition for Nuclear Responsibility.

That’s because the zirconium alloy used in the hundreds of tubes holding nuclear fuel in Pickering’s reactors are exposed to intense radiation, very hot water, and high pressure, he said.

It costs billions of dollars to replace the tubing, which is what is being done at the refurbishments at the two other nuclear plants in Ontario, in Darlington and on the Bruce Peninsula.

Anti-nuclear advocates at Ontario Clean Air Alliance said in response to the extension news that Pickering “relies on seriously outdated technology” and is designed in such a way that a problem with any one of its six operational reactors could create a cascading effect on the others.

Angela Bischoff, a director at the group, also said that the plant has been plagued with safety problems over the years, including an accident in 1983 in which a pressure tube suffered a metre-long rupture and a loss of coolant. Coolant loss can cause a surge of power to occur in the reactor core. The site was shut down and two of the four reactors were eventually replaced (and two mothballed) at a cost of $1 billion.

Then in 1994, another pipe break resulted in a major loss of coolant and a spill of 185 tonnes of heavy water. Emergency measures to cool the core averted a meltdown.

The news that the Ford government was looking to extend the Pickering plant’s operational life was first reported by the Toronto Star on Monday.

The proposal would need to receive approval from the industry’s federal regulator, the Canadian Nuclear Safety Commission (CNSC).

A spokesperson for the regulator said it has not yet received notice that OPG intends to amend the terms of its licence. If and when such a notice is received, it would be reviewed by staff who would then make recommendations to the commission.

The application would also be subject to a public hearing “focused on safe operations and the protection of health, safety and environment,” senior communications advisor Isabelle Roy wrote in an email.

“It is important to emphasize and reiterate that the Commission will not issue a licence amendment, or any licence, unless it is satisfied that it is safe to do so and that there are adequate measures for the protection of the environment, the health and safety of persons and the maintenance of national security and international obligations,” she added.

Pickering was initially expected to safely produce power for some 230,000 full power equivalent hours, which is equal to about 30 years of typical operation.

It is not clear if the Ford government’s proposal will include exceeding that limit.

When Quebec closed its sole nuclear facility, Gentilly-2, in December 2012 it was approaching the 210,000 full power equivalent hours it was designed to withstand.

Thierry Vandal, Hydro-Quebec’s then-CEO, told the province’s National Assembly soon after that he was no more inclined to operate it past that limit than he would “climb onto an airplane that does not have its permits and that does not meet the standards.”

Green Party leader Mike Schreiner said he is “not ideologically opposed to nuclear” but warned that “you don’t want to tempt fate or roll the dice too many times before something goes wrong.”

“It is well past its best-before date,” he said. “It seems really irresponsible on the premier’s part.”

He also pointed out that the Ford government had promised to lower electricity costs, yet is choosing expensive nuclear refurbishments and extensions over cheaper alternatives. These include efforts to improve energy efficiency and conservation, for which Ford has cut funding. Ford’s government has also spent at least $231 million to cancel hundreds of wind and solar projects, including two that were nearing completion, and rejected a deal with Quebec to import some of its excess hydro-electric power.

“They’re chasing nuclear dreams when we have lower cost options available to us,” he said. SOURCE

Group of Seven painter A.Y. Jackson’s 1938 painting “Radium Mine” pictures Great Bear Lake on Dene Territory, just out of view is the El Dorado radium and uranium mine which produced ore for the Manhattan Project. Image via Wikipedia.

That doesn’t sit well with the Committee for Future Generations, a group of Dene and Cree people in so-called northern Saskatchewan. The richest deposits of uranium in the world are found in the Athabasca basin which supplies 20 percent of the global market and generates up to $1 billion annually. The Committee for Future generations is devoted to “Fighting the continued destruction of lands by uranium mining and tailings as well as the under-handed tactics of the nuclear industry to sell the storage of high-level nuclear waste on First Nations territory by bribing the weak links in our governance systems.”

BWXT Peterborough currently shaves down uranium fuel pellets and inserts them in zirconium rods that become fuel for CANDU nuclear reactors. And if they get their way they will soon process 53 percent of the nuclear fuel used in Canada by baking uranium yellowcake dioxide fuel powder into pellets. The proposal would significantly increase uranium air and water pollution in Peterborough. In response local group Citizens Against Radioactive Neighourhoods (CARN), formed to oppose the move to process the uranium 30 metres away from the Prince of Wales Public School.

According to the Committee for Future Generations, “Each segment of the nuclear fuel chain is presented as a compartmentalized island which is not accountable beyond a small set of parameters.”

“We can hear the Earth crying Kuh-t’ah! A ku se!” says Susnaghe Neneh in Dene. Kuh-t’ah! A ku se! means “enough”. Neneh’s grandfather passed on the teachings from his elders that forbid touching “the black stone” and warned that disturbing it would unleash demons upon the Earth. His grandfather’s trap-line is now obliterated and in its place is the world’s largest uranium mill owned by Cameco Corporation, formerly known as El Dorado.

El Dorado began extracting uranium in the 1930’s in Sahtu Dene territory on Great Bear Lake. Bags of uranium were transported by Dene men on river boat and rail to Port Hope Ontario where it was processed for use in the Manhattan Project which culminated in the atomic bombing of Hiroshima and Nagasaki Japan in 1945.

In 1998 to mark the 53rd anniversary of the bombing, a group of ten Dene travelled to Hiroshima to apologize to the survivors and take responsibility for how the material taken from their territory was used to create such violence.

In 2013 Kirstin Scansen from the Nahithaw Woods Cree First Nation confronted BWXT (formerly GE-Hitachi) and the Canadian Nuclear Safety Commission (CNSC) at a meeting to review the operation of the Toronto uranium processing plant which holds a dual licence with the Peterborough facility. Scansen said, “The Denesuline men, who carried sacks of your beloved ‘natural uranium’… died horrible, painful deaths by cancer and bone cirrhosis, a condition where bone tissue dies and bones collapse.”

Scansen called out the “bullshit,” “lies,” and “propoganda” of BWXT and the CNSC who claim nuclear is safe. Scansen said she opposed the operation of BWXT because “it is a key cog in the machine that creates low, medium, and high level nuclear waste that humanity has absolutely no clue what to do with but is currently seeking to situate on Indigenous territories.”

It was when Scansen accused BWXT and the CNSC of hiding the connection between uranium mining, processing, and the proliferation of depleted uranium weapons and nuclear warheads – that CNSC president abruptly declared the meeting over and the commissioners walked out.

The uranium stolen from Dene and Cree territory that has coursed through downtown Peterborough for decades now sits on the shores of Lake Ontario at the Darlington and Pickering nuclear reactors. The high level spent fuel waste will be lethally radioactive for thousands of years. The Nuclear Waste Management Organization (NWMO) is now attempting to bury Canada’s supply of nuclear waste in a deep geological repository on Indigenous territory. NWMO has narrowed down its search for a “willing host community” to the Chippewas of Saugeen First Nation Territory near the Bruce Nuclear Power generating station and Migisi Sahgaigan (Eagle Lake First Nation) territory.

As the people of Peterborough-Nogojiwanong consider BWXT’s request to expand their operation and renew their operating licence for ten more years, they may want to consider not just the local impacts of uranium pollution but also the ethical implications of colonialism and radiation exposure along the nuclear fuel chain from mining to processing to power generating to weapons and waste.