A campaign manager for Alberta Premier Jason Kenney has been fined by Elections Alberta and has had his request to throw out the fine by the courts dismissed.

A campaign manager for Alberta Premier Jason Kenney has been fined by Elections Alberta and has had his request to throw out the fine by the courts dismissed. The failed appeal by Alan Hallman took place just days before the government shut down an office investigating election wrongdoings.

Hallman – a close friend and advisor to the premier – had appealed a fine of $1,500 handed down by Elections Alberta.

Details in the document were scarce but appears to centre around Hallman handing out election pamphlets that did not meet the required legal criteria.

Neither side of the case asked for costs to be covered.

In a statement issued after the WS broke the story, the UCP said: “The event in question took place during the 2017 Calgary-Lougheed by-election, wherein there was a disagreement between the individual in question and an Elections Alberta official visiting the office. An administrative fine was issued against the individual. No violation was found against the candidate nor the Calgary-Lougheed UCP campaign as an entity.

“The Party considers this matter closed.”

Hallman couldn’t be reached for comment. Denis said he couldn’t speak until talking to Hallman.

The move comes days after the province passed Bill 22, which eliminated the office of the Election Commissioner and rolled it into the responsibility of the Chief Electoral Officer of Elections Alberta.

Alberta’s Ethics Commissioner warned UCP MLAs of a potential conflict of interest in voting to fire the investigator looking into their party.

Prior to his firing, Lorne Gibson had handed out more than $210,000 in fines against people involved in Jason Kenney’s campaign to be UCP leader in 2017.

The government has said, if they decide, the electoral officer can continue with Gibson’s investigations that were ongoing.

Kenney said merging the office will save taxpayers more than $1-million over five years. SOURCE 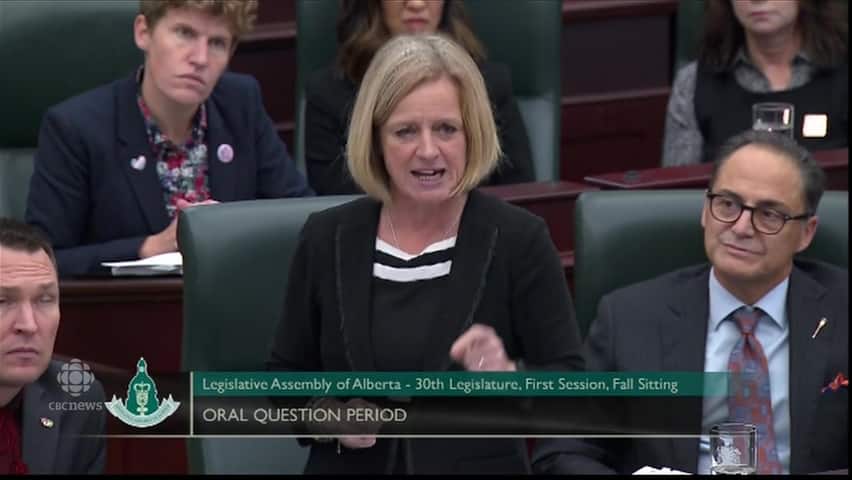 Rachel Notley is removed from the legislature

After refusing an order to apologize in the Alberta Legislature, Opposition Leader Rachel Notley is removed by Speaker Nathan Cooper. 6:33

Alberta NDP Leader Rachel Notley was ordered to leave the legislative assembly Tuesday after she refused to apologize for saying the United Conservative Party house leader was lying about a bill to fire the election commissioner.

She was posing a question about Bill 22, introduced Monday, which would fire Election Commissioner Lorne Gibson in the middle of his investigation into the UCP leadership race, won by Premier Jason Kenney.

Notley objected when UCP House Leader Jason Nixon said “no one is firing anyone” when answering her questions in the house about Gibson’s pending termination. Bill 22 says the person holding the position of election commissioner is terminated when the bill becomes law, though the chief electoral officer could hire them back.

Under house rules, MLAs are not allowed to say another member is lying or misleading the house. Usually, the issue is resolved when an MLA apologizes and withdraws their remarks at the request of the Speaker. But Notley refused to do so.

“The greatest jeopardy posed in this house is posed by Bill 22,” she told Speaker Nathan Cooper. “And at this point we must have a full and honest conversation that does not involve misleading statements by any member over there.

“So I will not apologize until we have fully canvassed the destructive nature of this bill in a historic way to the people of this province and to the members of this house past, current and future.”

Outside the house, Notley defended her conduct.

“I just knew that we needed to make the case that this is a much bigger issue than parliamentary language. This is about parliamentary existence.”

Earlier in the day, Notley asked Alberta’s lieutenant-governor to deny assent of Bill 22 if it is passed by Alberta’s majority UCP government.

Gibson expressed concern his dismissal will compromise “the independence of election administration and the real and perceived integrity of the election process.”

In a written statement issued Tuesday afternoon, Gibson said he was “surprised and disappointed” after learning of his pending job loss through media reports.

Gibson has been focusing on the so-called “kamikaze” leadership bid of Jeff Callaway since he took office last year and has laid more than $200,000 in fines against 15 people involved.

The Callaway and Kenney campaigns are alleged to have conspired to bring down Kenney’s main opponent Brian Jean. Both men deny the collaboration.

“Inadequate enforcement of election rules can allow for inappropriate conduct to occur and that conduct can affect voter participation and election outcomes,” Gibson wrote.

Notley sent a letter on Tuesday to Lt.-Gov. Lois Mitchell urging her to take action on a bill Notley calls a “misuse of the authority of the legislature” and “a threat to our democratic institutions” — particularly since the government has moved to limit time for debate.

“While I recognize that it is unusual for the lieutenant-governor to exercise this authority, I am convinced that the exceptional nature of this proposed legislation calls for such extraordinary measures,” Notley writes.

The proposed legislation would dissolve the independent office of the election commissioner and change the scope of the position so it reports to Chief Electoral Officer Glen Resler.

Gibson’s contract, which was in place until 2023, would be terminated upon passage and royal assent of the bill.

Critics say that by removing Gibson, Premier Jason Kenney is thwarting additional investigations into the race.

Finance Minister Travis Toews, the minister responsible for Bill 22, said Resler is free to rehire Gibson if he chooses. Toews said the change will have no effect on ongoing investigations.

The NDP will also seek an emergency debate on the bill Tuesday afternoon. Since the UCP has a majority in the Alberta legislature, the request likely will not be granted.

Notley said on Monday the NDP caucus will also be seeking advice on what legal steps can be taken to stop the government from firing Gibson. SOURCE

If you’re shocked that Jason Kenney’s government has effectively just fired the guy who’s been investigating the sleazy kamikaze campaign that preceded the premier’s selection as leader of the United Conservative Party in 2017, you really haven’t been paying attention.

How shocked is he? …

Yesterday Don Braid, the Calgary Herald’s venerable political columnist, called the mechanism to fire Election Commissioner Lorne Gibson buried in Bill 22, which will become the Reform of Agencies, Boards and Commissions and Government Enterprises Act as soon as the UCP caucus finishes rushing it through the legislature, “a genuine gasping shocker.”

That it is not. Indeed, the only shock — mild surprise, more like — is that the UCP didn’t do this sooner, like weeks after the April 16 election that brought Kenney and the UCP to power, before Gibson had the opportunity to levy $210,000 in fines on various bad actors involved in the UCP leadership race.

As was said in this space in January 2018, well before the election that brought the UCP to power, “if the government changes after the general election expected very soon, there can be no confidence a new government would not shut down the investigation for fear of what it might find.”

And as I observed in July, Kenney clearly wanted to send Gibson packing as soon as possible, “if only he could think up a decent excuse that didn’t make it look like he was trying to derail an ongoing investigation.”

Is the perceived need to consolidate government offices, then underfund the one that’s left, a good enough excuse? Any old port in a storm! So, no, this is not exactly a gasping shocker.

Most of the folks fined by the office of the election commissioner for various campaign shenanigans seem to have been involved in the effort by Jeff Callaway’s leadership campaign to bring down Kenney’s chief competitor, former Wildrose Party leader Brian Jean, while the future premier kept his paws clean. It’s come to be known as a kamikaze campaign because it was intended to self-destruct the instant it had immolated Jean’s ambitions.

But unless you believe there’s something to guilt by association, Kenney himself has managed to escape suspicion. Still, you can’t be too careful, which is why, of course, the government is now moving ahead on might alternatively be called an Act to Rid Me of That Meddlesome Election Commissioner.

The government says the investigations started by Gibson and his staff after the NDP government set up the office of the election commissioner to enforce its election financing laws will continue. If you believe that, you are probably one of the nice people who are shocked, just shocked that the unit is about to be shut down and its boss given his walking papers.

As for Finance Minister Travis Toews’s risible claim this is only being done to save money, I doubt anybody believes that. Naturally, opponents of the government are offended. Opposition Leader Rachel Notley called it “an historic abuse of power in Alberta, one that is corrupt.” But the government’s supporters simply won’t care. They’ll think, with some historical perspective, that this is the way we’ve always done politics in Alberta.

As for Gibson, he knows the drill. He’s been skidded by Alberta Conservatives before, the last time in 2009 when the Progressive Conservatives declined to renew his contract as chief electoral officer for taking his duties too seriously for their tastes.

Unfortunately for Kenney, early on Gibson or someone on his staff alerted the Royal Canadian Mounted Police and a parallel investigation by the federal police force of voter fraud during the leadership race is continuing.

There is nothing certain UCP insiders can do about that except cross their fingers, lawyer up, and plot the creation of a provincial police force to replace the RCMP. Not that anyone would dare to suggest that … oh, wait!

Meanwhile, lost in the smoke and mirrors, other bad stuff

Meanwhile, while everyone focused on the preparation of Gibson for the skids, there are other goodies in Bill 22. Among them: