We know the Arctic is melting – but it’s also on fire. And these wildfires could transform the pace, and scope, of global warming in ways that could affect us all. 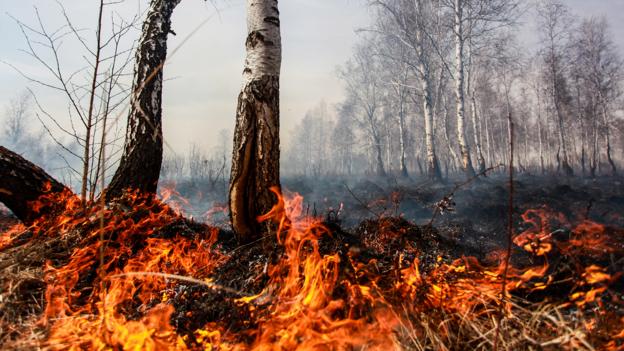 The Arctic is transforming before our eyes: the ice caps are melting, the tree-line is shifting northwards, starving polar bears wander into cities. The region is warming twice as fast as the rest of the planet due to climate change, largely due to changes in albedo – the loss of sunlight-reflecting ice and snow, replaced by sunlight-absorbing ocean and soil. This is driving a dangerous positive feedback cycle where heating spirals into more heating.

And, now, the Arctic isn’t only losing its ice. It is being set ablaze.

Gargantuan forest fires in Siberia, which burned for more than three months, created a cloud of soot and ash as large as the countries that make up the entire European Union. More than four million hectares of Siberian taiga forest went up in flames, the Russian military were deployed, people across the region were choked by the smoke, and the cloud spread to Alaska and beyond. Fires have also raged in the boreal forests of Greenland, Alaska and Canada.

Though images of blazing infernos in the Arctic Circle might be shocking to many, they come as little surprise to Philip Higuera, a fire ecologist at the University of Montana, in the US, who has been studying blazes in the Arctic for more than 20 years.

“I’m not surprised – these are all the things we have been predicting for decades,” he says.

Higuera and his team predicted in 2016, based on sophisticated computer modeling, that fires in the boreal forests and Arctic tundra would increase by up to four times by 2100.

A key tipping point, he says, is an average July temperature of 13.4C over a 30-year period. Much of the Alaskan tundra has been perilously close to this threshold between 1971 and 2000, making it particularly sensitive to a warming climate. The number of areas near to and exceeding this tipping point are likely to increase as the climate continues to warm in the coming decades, says Higuera.

“Across the circumpolar Arctic, the take-home message is that there are distinct thresholds above which you start to see the tundra burning – it’s like a binary switch,” says Higuera. “This threshold relationship is part of what makes the Arctic so sensitive: areas will stay below this threshold for years, off our radar for fire activity – and then all of a sudden with a change in temperature it will start to burn.” MORE

The animals that will survive climate change