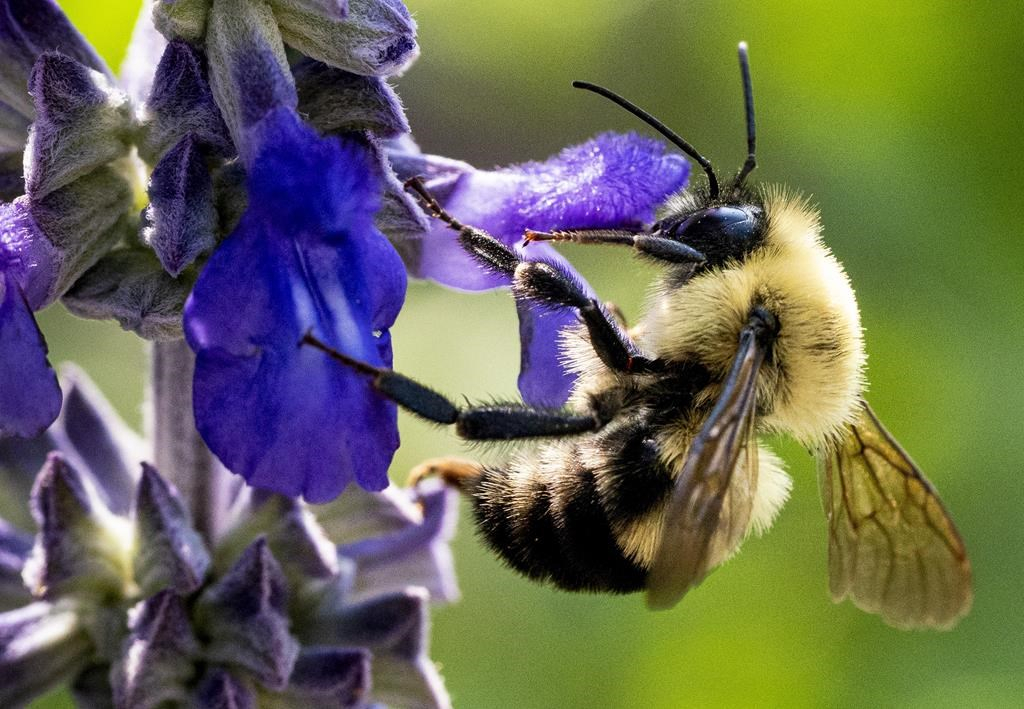 A bee gathers pollen from a flower in a Montreal park on Tuesday, July 30, 2019. File photo by The Canadian Press/Paul Chiasson

A lack of wild bees and managed honey bees is limiting pollination and yields for certain crops on farms in British Columbia and across the United States, a collective of researchers has found.

Their study published Tuesday in the Royal Society’s journal Biological Sciences used data from more than 130 farms to assess the pollination of crop flowers and yield for apples, highbush blueberries, sweet and tart cherries, almonds, pumpkins and watermelon.

Of those crops, the study found five frequently showed evidence of pollinator limitation, suggesting that the protection of wild bees and greater investment in honey bee colonies is likely to boost yields.

It notes that crops dependent on pollinators generate more than US$50 billion each year in the United States and declining bee populations raise concerns about food security in years to come.

The researchers collaborated to gain a “comprehensive understanding of our reliance on a lot of these pollinators for these really vitamin rich, nutritionally rich foods,” said Kyle Bobiwash, a co-author and assistant professor in the department of entomology at the University of Manitoba.

Blueberry crops in B.C. were among those most affected by limited pollination, said Bobiwash.

On some farms, he said, “there was a tremendous amount of pollen limitation, meaning there were a lot of flowers not actually getting pollinated sufficiently to set fruit.”

But the results varied by farm, said Bobiwash, noting he was involved in earlier research that showed some farms where crops had better pollination boosted yields by as much as 30 per cent.

“It amounted to thousands and thousands of dollars per acre, just because they had slightly better bee populations than other farms.”

“If you have a lot of pollen and you’re setting a lot more seed, you really invigorate this berry and you get all those biochemical processes happening. So, it’s going to gain more water (and) sugar, it’s going to produce more secondary metabolites, which are the little flavour compounds.”

A lack of wild bees and managed honey bees is limiting pollination and yields for certain crops on farms in British Columbia and across the United States, a collective of researchers has found.

Global demand for crops that are dependent on pollinators has increased, said Bobiwash, while the development of those crops often cuts into bee habitat.

At the same time, he said, climate change could affect the close relationship between plants and pollinators.

“We might have a plant blooming before the pollinators it evolved with emerge.”

Increasing pollination and crop yield isn’t as simple as bringing more honey bees to every farm, said Bobiwash. While the study showed different bees provided comparable amounts of pollination for most crops, he said some responded best to honey bees, such as almonds in California, and others benefited most from wild bees.

The results of the study point to the importance of protecting and enhancing habitat for wild bees, which could include wildflowers and certain weeds that farmers would normally remove, he said.

This report by The Canadian Press was first published July 29, 2020.

How to create a wild bee sanctuary