Individual efforts are important, but we need collective action and systemic change. And we can only get that at the ballot 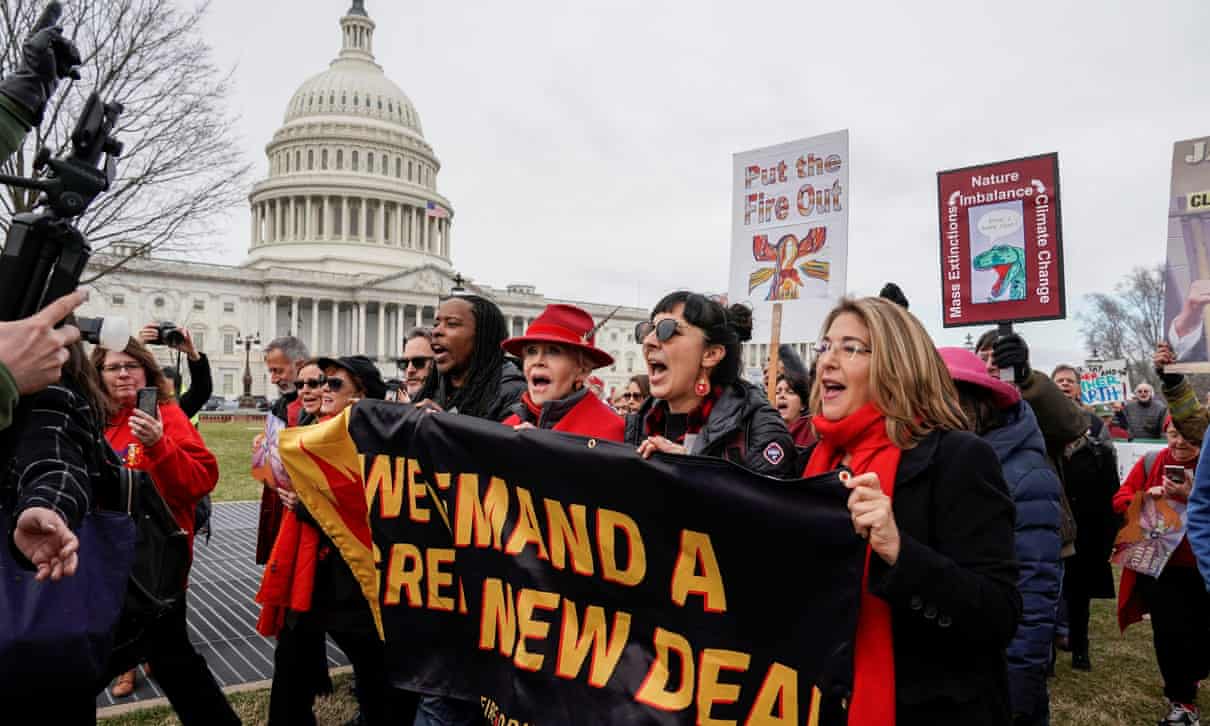 Jane Fonda at a protest calling attention to the climate crisis in Washington in January. ‘Your vote will reverberate for years.’ Photograph: Joshua Roberts/Reuters

In a world with so many problems, it’s easy to feel helpless. And particularly right now in the midst of the Covid-19 pandemic, quite alone. But even as we practice social distancing, we have an opportunity to work together to solve the greatest problem that humanity faces. No, I’m not talking about coronavirus. I’m talking about climate change.

As a climate scientist, I’m often asked what people can do about climate change, a problem so pervasive and impactful that literally all the rest of humanity’s problems play out upon its landscape. But there is no one specific answer, no magic bullet. Everyone has something different to contribute. And that’s the challenge. We must each find what we’re passionate about, capable of and good at. And we must all find our voice.

For some, that means organizing and attending local protests to put pressure on politicians, or participating in clean-up efforts that require nothing more than some gloves and trash bags. For others, it means supporting environmental organizations. It can mean working with businesses to reduce pollution or researching new technologies. Artists, celebrities and opinion leaders can use their platforms to educate, motivate and elevate others to join the cause. And we can change our lifestyle to lower our individual carbon footprint – eating less meat or going electric.

Our efforts as individuals are important. But alone they cannot solve this problem. We need collective action and systemic change. We need policies to incentive the decarbonization of our society. That requires politicians willing to support climate-friendly policies. And the only way we get them is by voting.

Voting is a moment of activism that can have a years-long impact. Just look at the Trump administration. Slim minorities in a handful of states by just over a quarter of eligible voters resulted in a president, Donald Trump, who threatens our entire planet. Trump stocked his administration with polluters and lobbyists who took the regulatory reins off their pals in the oil and gas industry. His administration has slowly but steadily dismantled a half century of environmental progress.

In the space of a few years Trump has erased America’s leadership and moral standing. His threat to withdraw from the Paris agreement (which he can’t actually make good on if he loses the upcoming election), has provided an excuse for other major emitters such as China to ease off in their own decarbonization efforts. The result has been a surge of fossil fuel pollution that will remain in the global atmosphere for thousands of years, impacting everyone on Earth.

Yet there is reason for cautious optimism that we can still right this ship. Because no sooner than Trump was elected were others organizing to mitigate the damage he has done. For example, in response to his decision that he would pull the US out of the Paris agreement, climate action became a priority from the ground up. A coalition quickly formed between mayors and governors both red and blue, CEOs, university presidents and faith leaders of all types to tell the world that they remained dedicated to the climate fight.

Since then, they’ve demonstrated exactly how powerful we can be when we work together for a common goal. This coalition represents nearly 70% of US GDP and over half of our emissions and alone is on track to cut US emissions by 25% by 2030. If cities, states, businesses and all other non-federal institutions made maximum effort to curtail their emissions the US could reach a nearly 40% reduction by 2030.

So what can you do to advance action on climate change?

Well, you can look for local organizations that may need help. You can join, or donate to, any number of worthy local or national charities that speak to the combination of what you love to do and what you want to protect.

And you can vote. On climate. From president to police commissioner.

Your vote will reverberate for years, as the efforts that have grown in the dark shade of the Trump administration are poised to bloom with a President Joe Biden, a climate-friendly Congress and state and local politicians who favor climate action. Strong majorities of voters want action on climate to be part of recovery efforts that grow our economy. Across the country, youth activists have lit a beacon of moral clarity that demands action in response to science.

In Congress, House Democrats just released their report on the climate crisis, and are ready to turn it into action, while the Biden campaign has just released a robust new climate platform that, if enacted, would put us on solid footing to win the climate fight. Though it may not be perfect, it’s the strongest climate call ever put forward by a Democratic party nominee for president, and will quite literally mean a world of difference compared to the Trump agenda.

Within two decades we could decarbonize our power sector and create 25m clean energy jobs. Through a wartime-scale mobilization to rid our economy of carbon, we can address the unemployment crisis we currently face and put our country on the path to generate good, durable and clean jobs. It’s a classic win-win scenario.

Despite the environmental hostility of the current Washington power brokers, local leaders have laid the groundwork for success. All we need now is for the federal government to do its job, and serve as a powerful centralized force to protect us.

And all that takes is a vote. In November.

Michael E Mann is distinguished professor of atmospheric science at Pennsylvania State University. He is author of the upcoming book The New Climate War: The Fight to Take Back Our Planet, due out in January (Public Affairs Books)