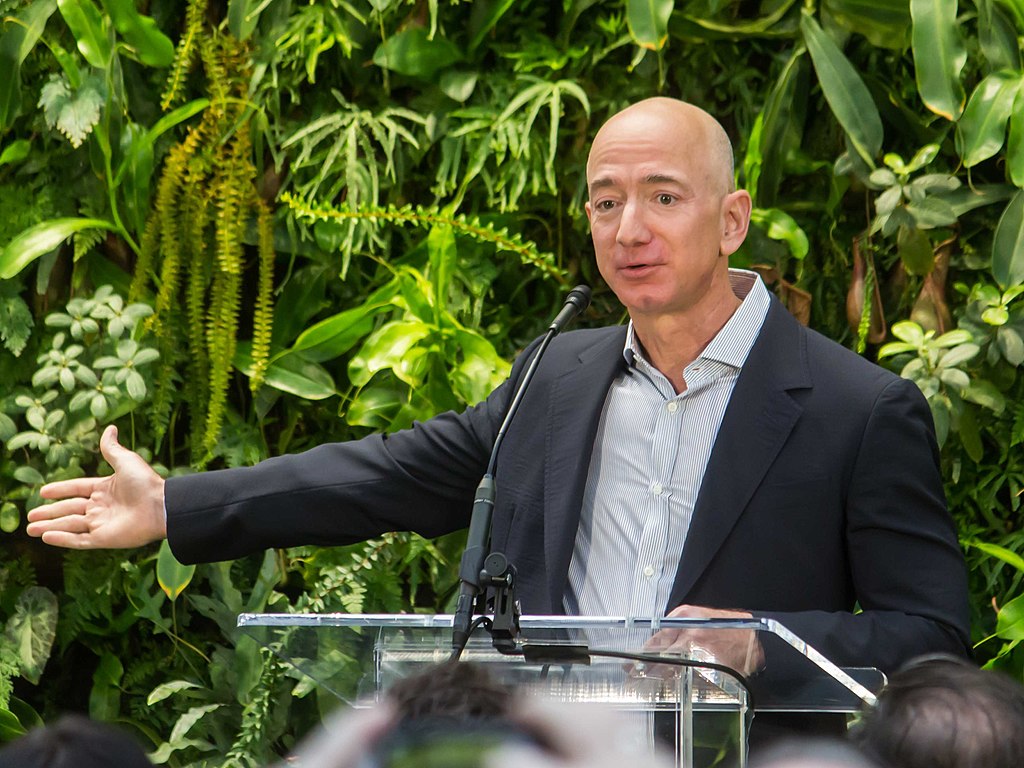 As more areas of our lives become subject to the power of big tech, the fortunes of people like Jeff Bezos will continue to mount. (Wikimedia Commons)

This week, Amazon CEO Jeff Bezos saw the largest single-day increase in wealth ever recorded for any individual. In just one day, his fortune increased by $13 billion. On current trends, he is on track to become the world’s first trillionaire by 2026.

Those on the right wing of politics argue that extreme wealth is a function of hard work, creativity, and innovation that benefits society. But wealth and income inequality have increased dramatically in most advanced economies in recent years. The richest of the rich are much wealthier today than they were several decades ago, but it is not clear that they are working any harder.

Mainstream economists make a more nuanced version of this argument. They claim that the dramatic increase in income inequality has been driven by the dynamics of globalization and the rise of “superstars.” Firms and corporate executives are now competing in a global market for capital and talent, so the rewards at the top are much higher — even as competition also constrains wages for many toward the bottom end of the distribution.

According to this view, high levels of inequality are a reward for high productivity. The most productive firms will attract more investment than their less productive counterparts, and their managers, who are performing a much more complex job than those managing smaller firms, will be rewarded accordingly.

There is another explanation for the huge profits of the world’s largest corporations and the huge fortunes of the superrich. Not higher productivity. Not simply globalization. But rising global market power.

Many of the world’s largest tech companies have become global oligopolies and domestic monopolies. Globalization has played a role here, of course — many domestic firms simply can’t compete with global multinationals. But these firms also use their relative size to push down wages, avoid taxes, and gouge their suppliers, as well as lobbying governments to provide them with preferential treatment.

Jeff Bezos and Amazon are a case in point. Amazon has become America’s largest company through anticompetitive practices that have landed it in trouble with the European Union’s competition authorities. The working practices in its warehouses are notoriously appalling. And a study from last year revealed Amazon to be one of the world’s most “aggressive tax avoiders.”

Part of the reason Amazon has to work so hard to maintain its monopoly position is that its business model relies on network effects that only obtain at a certain scale. Tech companies like Amazon make money by monopolizing and then selling the data generated from the transactions on their sites.

The more people who sign up, the more data is generated; and the more data generated, the more useful this data is for those analyzing it. The monetization of this data is what generates most of Amazon’s returns: Amazon Web Services (AWS) is the most profitable part of the business by some distance.

Far from representing its social utility, Amazon’s market value — and Bezos’ personal wealth — reflects its market power. And the rising market power of a small number of larger firms has actually reduced productivity. This concentration has also constrained investment and wage growth as these firms simply don’t have to compete for labor, nor are they forced to innovate in order to outcompete their rivals.

In fact, they’re much more likely to use their profits to buy back their own shares, or to acquire other firms that will increase their market share and give them access to more data. Amazon’s recent acquisition of grocery store Whole Foods is likely to be the first of many such moves by tech companies. Rather than the Darwinian logic of compete or die, the tech companies face a different imperative: expand or die.

States are supporting this logic with exceptionally loose monetary policy. Low interest rates make it very easy for large companies to borrow to fund mergers and acquisitions. And quantitative easing — unleashed on an unprecedented scale to tackle the pandemic — has simply served to raise equity prices, especially for the big tech companies.

As more areas of our lives become subject to the power of big tech, the fortunes of people like Bezos will continue to mount. Their rising wealth will not represent a reward for innovation or job creation, but for their market power, which has allowed them to increase the exploitation of their workforces, gouge suppliers, and avoid taxes.

The only real way to tackle these inequities is to democratize the ownership of the means of production, and begin to hand the key decisions in our economy back to the people. But you would expect that even social democrats, who won’t pursue transformative policies, could get behind measures such as a wealth tax.

“Building back better” after the pandemic will be impossible without such a tax — and the vast majority of both Labour and Conservative voters support such an approach, according to a recent poll. And yet it appears that Labour’s leadership are retreating from the idea.

In an interview the other day, I was asked why we should care about Jeff Bezos’s wealth if it makes everyone else better off. But the extreme inequalities generated by modern capitalism are making obvious something that Marxists have known for decades: the superrich generate their wealth at the expense of workers, the planet, and society as a whole.

In a rational and fair society, the vast resources of a tiny elite would be put to use solving our social problems.