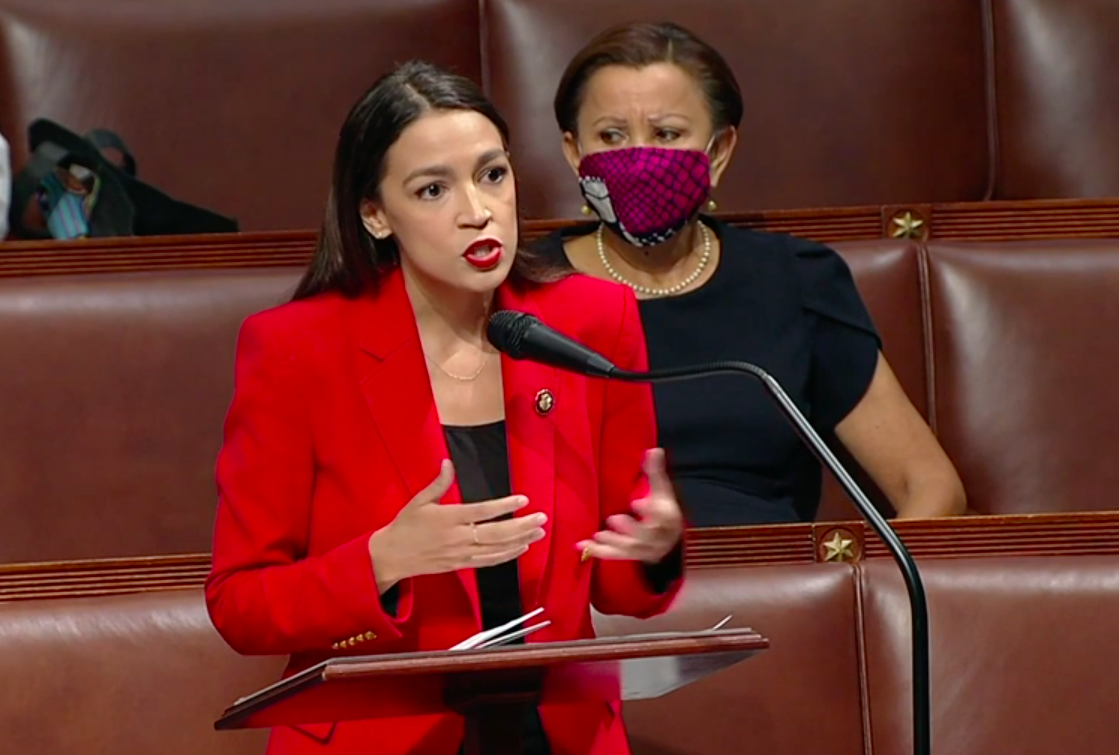 Rep. Alexandria Ocasio-Cortez speaks on the House floor about her confrontation with Rep. Ted Yoho. (Still from C-SPAN coverage)

Alexandria Ocasio-Cortez’s blistering speech yesterday powerfully connected her experience of sexism with the broader issues of patriarchy and workplace harassment. It was proof, once again, that it’s very nice having democratic socialists in office.

In ten very satisfying minutes yesterday, New York representative Alexandria Ocasio-Cortez (AOC) wiped the House floor clean with Tea Party Republican Ted Yoho. Ocasio-Cortez’s response to the Florida representative’s recent misogynistic comments (and his subsequent non-apology) was much more than a liberal “lesson in decency.” It was a blistering, eloquent indictment of an entire edifice of societal chauvinism and workplace harassment in the United States — and proof, once again, of the benefit of having democratic socialists in office.

Earlier this week, Yoho — who recently voted against making lynching a hate crime — told Ocasio-Cortez she was “disgusting,” “crazy,” and “dangerous” on the steps of the Capitol for her comments linking crime rates to poverty. He then called her a “fucking bitch” in front of the press. On Wednesday morning on the House floor, Yoho recited a non-apology for the “abrupt manner” in which he spoke to Ocasio-Cortez, while explaining that he “cannot apologize for my passion or for loving my God, my family, and my country.”

On Thursday morning, AOC tore Yoho to shreds. But more to the point, she went after the societal norms that accept misogyny. “This is not new,” she said, speaking on the House floor. “And that is the problem.” Ocasio-Cortez recounted the harassment that she faced when she waited tables and tended bars. She went on to explain: “This issue is not about one incident. It is cultural. It is a culture of. . . . impunity, of accepting violence and violent language against women and an entire structure of power that supports that.”

AOC decried Yoho’s use of his wife and daughters as shields to deflect criticism from his sexist behavior, pointing out that she, too, is somebody’s daughter. “This harm that Mr Yoho tried to levy at me was not just directed at me. When you do that to any woman, what Mr Yoho did was give permission to other men to do that to his daughters. . . . I am here to say, that is not acceptable.”

Compare AOC’s response to the years of liberal feminism that pleaded to keep abortion safe, legal, and rare. Or to Biden’s absurd proclamation that Donald Trump is the country’s first racist president. The mainstream Democratic Party approach to right-wing fanaticism is to go on the defensive, or to personalize the issue as though the problems of the world can be chalked up to Trump’s psychosis, Russian interference, or particularly insidious right-wing Republicans.

Democratic socialist politicians like AOC instead focus attention on deeper structures of inequality and oppression, which have given power and platforms to people like Ted Yoho. Ocasio-Cortez noted that she had no personal beef with Yoho — the fact that his outburst is common is the real problem. Rather than simply defending herself from attack, she went on the offensive — amplifying the experience of millions of women, and framing it within an analysis of sexism and misogyny.

Just as Bernie Sanders mainstreamed previously fringe demands like Medicare for All, and Ilhan Omar brought anti-imperialism to the halls of Congress, AOC is helping to popularize a leftist feminism — and perhaps even giving confidence to more and more people to act on it.