European countries are spending big to revive their economies, but they will have no legitimacy with young people if they ignore the climate 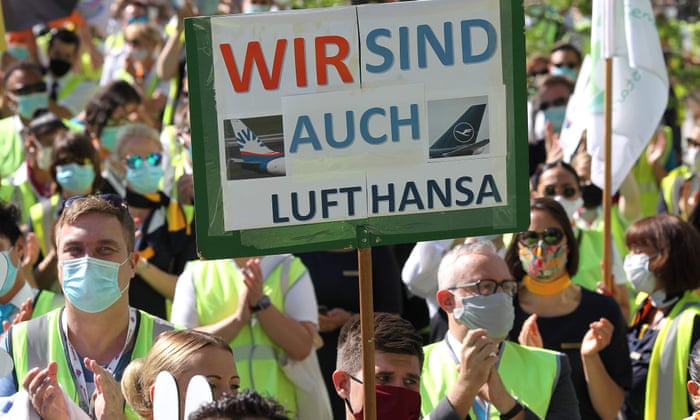 The future of Europe depends on climate action. This is the resounding message that young Europeans have delivered to their leaders over the past two years. To be sure, the wave of young climate activists across the continent, from Fridays for Future to Extinction Rebellion, is part of a global response to the climate crisis. But for the EU in particular, it is also a warning from a new generation of Europeans to their leaders: our European identity hinges on your climate policies.

For our parents’ generation, the European Union defined itself as a protector of peace, a fortress against fascism and a society of (relative) social security. For our generation – we are in our mid-20s – this narrative does not resonate. We came of age in a Europe of crises: a financial collapse, a panic over migration, a surge of populism. These formative moments gave the lie to the notion of a united European identity. To many of us, the EU appeared less a project of democracy, diversity or solidarity than one of bureaucracy, xenophobia and fracture. What is more, Europe’s responses to these crises were hardly material for a new common narrative. Just the opposite: the responses were the crises.

But the climate crisis is different. For one, young Europeans see it not just as a threat, but also a genuine opportunity to build a better world (and a better Europe). An Eupinions poll last year found that 47% of 16- to 25-year-olds believe the environment should be the EU’s top policy priority, nearly 10% more than those in older age groups. Poll after poll – including one conducted by our Europe’s Stories research team, earlier this year – finds young Europeans overwhelmingly supportive of eliminating the EU’s carbon emissions by 2030.

EU leaders, mired in years of failed top-down projects to find “a new narrative for Europe”, have finally taken note. In December 2019, Ursula von der Leyen’s European commission made headlines with its European Green Deal, which aims to turn Europe into the world’s first carbon neutral continent by 2050. While finally bringing its fossil-fuel exit underway, Germany declared climate change one of the key policy priorities for its current council presidency. And European leaders have just negotiated the conditions of a recovery plan, earmarking 30% of both the EU budget and the new recovery fund for climate protection.

Yet so far, Europe has failed to match deeds to words. Negotiations about target dates for carbon neutrality across the continent have been sluggish. Worse, “carbon neutrality” has itself come to serve as a cover for outsourcing emissions to developing countries and investing in “alternative” fuels, such as biomass, that sound green but are really anything but. And despite all the talk, from the outset, the commission’s recovery strategy was set to prop up high-carbon industries once again. Consider one particularly egregious example: airline bailouts. Rescue packages for Lufthansa, Air France and their fellow crisis-hit airlines, amounting to €34.4bn, all came without binding environmental conditions. In the latest budget deal, the safeguards used to guarantee that funds go to green technologies instead of polluting industries remain unclear. In this light, the EU’s grand declarations of climate action could still amount to greenwashing, pure and simple – a narrative without substance.

Hollow narratives cannot endure; they undermine themselves. If EU leaders and national governments continue to soft-pedal and greenwash, they will forfeit the already fragile faith of our generation.

This loss of faith has already begun: our generation has not failed to notice the discrepancy between EU leaders’ exemplary commitment to climate action on paper and their delays and obfuscations in practice. Our polling for Europe’s Stories suggests that just over half of young Europeans think authoritarian states are better equipped to tackle the climate crisis than democracies – a worrisome but perhaps unsurprising trend that speaks to how urgently young Europeans want climate action, and to the failure of European democracies to meet the moment.

There is a better way forward. And, with governments opening their coffers to save their economies, it’s now or never. Here are a few specific proposals. Instead of asking for minimal (or no) climate commitments from failing airlines and auto manufacturers, the EU could institute a ban on short-haul flights – a policy that 62% of Europeans support – and accelerate the switch to electric vehicles. Instead of bowing to polluting industries on the sly, the EU could exclude emissions-intensive industries and practices, such as the fossil-fuel industry, chemical manufacturers or motorway expansions, from receiving recovery funds – no exceptions – and channel that money into a green public works programme. Instead of sticking with the loophole-ridden target of “carbon neutrality” by 2050, the EU could set a more appropriately ambitious target that includes strict trade regulations that pressure other emissions giants – such as China and the US – to speed up their own energy transitions. Oh, and stop cosying up to fossil-fuel lobbyists.

These measures would set Europe on a path to a just transition: from the third-largest polluter in the world to a genuine climate leader. They would also help to craft a new and durable European identity for a new generation of Europeans. It is up to Europe’s leaders to recognise, before it is too late, that the latter cannot succeed without the former. To save Europe, they will have to save the planet.