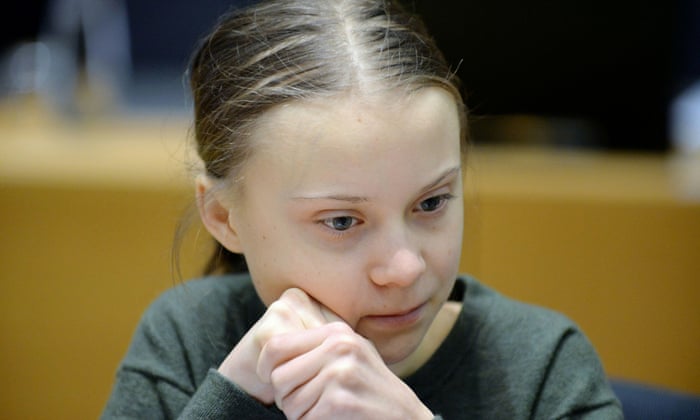 Greta Thunberg: ‘As long as the climate crisis is not being treated as a crisis, the changes that are necessary will not happen.’ Photograph: Johanna Geron/Reuters

Greta Thunberg has accused EU politicians of failing to acknowledge the scale of the climate crisis and said its €750bn Covid-19 recovery plan does not do enough to tackle the issue.

The climate campaigner said the package of measures agreed by EU leaders proved that politicians were still not treating climate change as an emergency.

EU leaders reached agreement on the recovery fund in the early hours of Tuesday and pledged that 30% of the package would go towards climate policies, but few details were given.

Thunberg, 17, and other leaders of the school strikes movement across Europe said the package was inadequate.

“We are asking our leaders to take care of the most fundamental thing: the safety of us, the safety of people around the world, the safety of our futures,” Neubauer said. “It is worrying on a democratic level when you ask for such substantial things, which seem so obvious, and yet you see how leaders are widely ignoring it, or not considering it to be as important as other things.”

Another prominent school striker, Adélaïde Charlier, 19, from Belgium, said politicians who adopted the language of climate action without following up with urgent policy measures were worse than climate deniers.

“When leaders minimise the climate crisis, I feel it is more dangerous than leaders that outright deny it … because then we actually feel we can rely on them and we are actually on the right path and that is dangerous and wrong.”

The group has written an open letter to EU leaders demanding they act immediately to avoid the worst effects of the climate crisis.

The letter, signed by 80,000 people including some of the world’s leading scientists, argues that the Covid-19 pandemic has shown that most leaders are able to act swiftly and decisively when they deem it necessary, but that the same urgency has been missing in the response to climate change.

“It is now clearer than ever that the climate crisis has never once been treated as a crisis, neither from the politicians, media, business nor finance. And the longer we keep pretending that we are on a reliable path to lower emissions and that the actions required to avoid a climate disaster are available within today’s system … the more precious time we will lose,” it says.

The letter argues that the climate and ecological emergency can only be addressed by tackling the underlying “social and racial injustices and oppression that have laid the foundations of our modern world”.

Earlier this year the EU unveiled its green new deal proposals, which it said aimed to transform the bloc from a high- to a low-carbon economy without reducing prosperity and while improving people’s quality of life. The climate strikers dismissed the EU’s target of net zero emissions by 2050 as dangerously unambitious.

Thunberg, who this week was awarded Portugal’s Gulbenkian prize for humanity and pledged the €1m ($1.15m) award to groups working to protect the environment and halt climate change, said it was up to ordinary people to stand up and demand that politicians rise to the challenge.

“I see the hope in democracy and in people,” she said. “If people become aware of what is happening then we can accomplish anything, we can put pressure on people in power … if we just decide we have had enough then that will change everything.”