B.C. rarely inspects hazardous waste handlers even though the province knows companies routinely break the rules, an investigation by The Narwhal reveals.

The Narwhal has also learned that even when provincial environmental compliance and enforcement staff do check companies, it’s virtually impossible for them to effectively investigate because the government stopped producing a digital database of shipments at the end of 2014 and now stuffs paper documents into cardboard boxes without a filing system.

Provincial investigators  — as well as journalists and members of the public — can no longer easily access information on where companies are picking up and moving hazardous waste such as batteries laden with corrosive acids, dangerous flammable liquids, spent and carcinogenic dry cleaning fluids, biomedical waste from hospitals, lung-destroying asbestos fibres and industrial sludges contaminated with heavy metals and pesticides.

And if anyone outside of the government wants access to that information, they’ll have to pay an exorbitant amount. When The Narwhal requested a complete paper record of the most recent year of hazardous waste shipments, it was told it would have to pay  $125,910 to obtain the documents.

Andrew Gage, a lawyer with West Coast Environmental Law, said the change to a paper-only system is “hugely problematic” from a law enforcement perspective given the “high levels of non-compliance” by companies in an industry that has associations with organized crime.

Since the electronic database was scrapped at the end of 2014, the Ministry of Environment and Climate Change Strategy has conducted more than 530 inspections of hazardous waste handlers, according to senior public relations officer David Karn. The inspections include companies generating and receiving hazardous waste as well as those transporting the waste.

Without the database, it is hard to put the number of inspections in perspective, but nearly 70,000 shipments were reported in 2014, suggesting only a small fraction are checked.

The companies inspected weren’t in full compliance with provincial hazardous waste regulations 70 per cent of the time.

In 48 per cent of cases, Karn said the infractions were minor in nature and presented a “low risk” to the public. Typical violations included “insufficient” labelling or storage of waste. In such cases, the companies were issued “advisories” to correct business practices.

In the remaining 22 per cent of cases, companies were issued warnings for violating provincial regulations in more serious ways or were subject to more exhaustive investigations.

The Narwhal asked the ministry if it could review documents related to those cases but was told it would have to file freedom of information requests to obtain them, a time-consuming process that can take months and often results in the return of heavily redacted pages.

The ministry did furnish a list, however, of some of the companies that were the subject of more thorough investigations, including Canoe Forest Products, United Concrete & Gravel, Sumas Environmental Services, Bio-Tox Medical Systems and El Cheapo’s Auto Wrecking & Towing.

The list also included Load ’Em Up Contracting, which in 2015 was fined $575 for “knowingly” providing “false information” on the hazardous waste it was shipping.

By using data from the last digitized hazardous waste record, The Narwhal was able to glean some understanding of what Load ’Em Up’s business dealings were in the year prior to receiving its fine.

Gage said handing a fine to a company that knowingly breaks the rules is a ridiculous tool to use in an industry that makes huge amounts of money for handling substances, which, by their very definition, are harmful to human health and the environment.

He said the ministry should levy much stiffer penalties or charge offending companies and take them to court.

Under provincial law, companies handling hazardous waste have long been required to fill out paper manifests detailing the type of waste they are handling, where the waste is going and who is shipping and moving it. Copies of those manifests are then sent to the Ministry of Environment. Truck drivers transporting waste are also required to have those manifests with them in the event they are inspected or involved in an accident and there is a spill.

Until the end of 2014, two data entry clerks inputted details from the manifests into the government’s now-defunct database. If provincial investigators later decided to investigate a company, they could turn to the database to see what companies reported handling and crosscheck that against what the companies were actually transporting through spot inspections.

Gage said with the database now a thing of the past, the government has effectively stymied timely and effective enforcement efforts.

“Anyone in law enforcement” knows that readily available data is “absolutely critical” to doing the job, he told The Narwhal.

“If [compliance and enforcement staff] are not able to review it easily, the entire value of all the work that they’re putting these companies through [by requiring them to fill out the manifests] and the entire benefit to the public is entirely undermined. So it’s hugely important.”

Late last year, The Narwhal filed a freedom of information request with the Ministry of Environment asking for a complete paper record of the most recent year of hazardous waste shipments. A month after filing the request, the  ministry responded, saying if The Narwhal wanted the record, it would have to pay $125,910. The government previously charged $100 for copies of the electronic dataset.

A letter from the Ministry of Citizens Services accompanied the response to the freedom of information request and explained that the massive bill was due to the volume of manifests. The Narwhal subsequently learned from the Environment Ministry that approximately 300,000 pages of waste manifests are generated each year and are stuffed into roughly 50 boxes with each box filled in the order that the manifests are received. 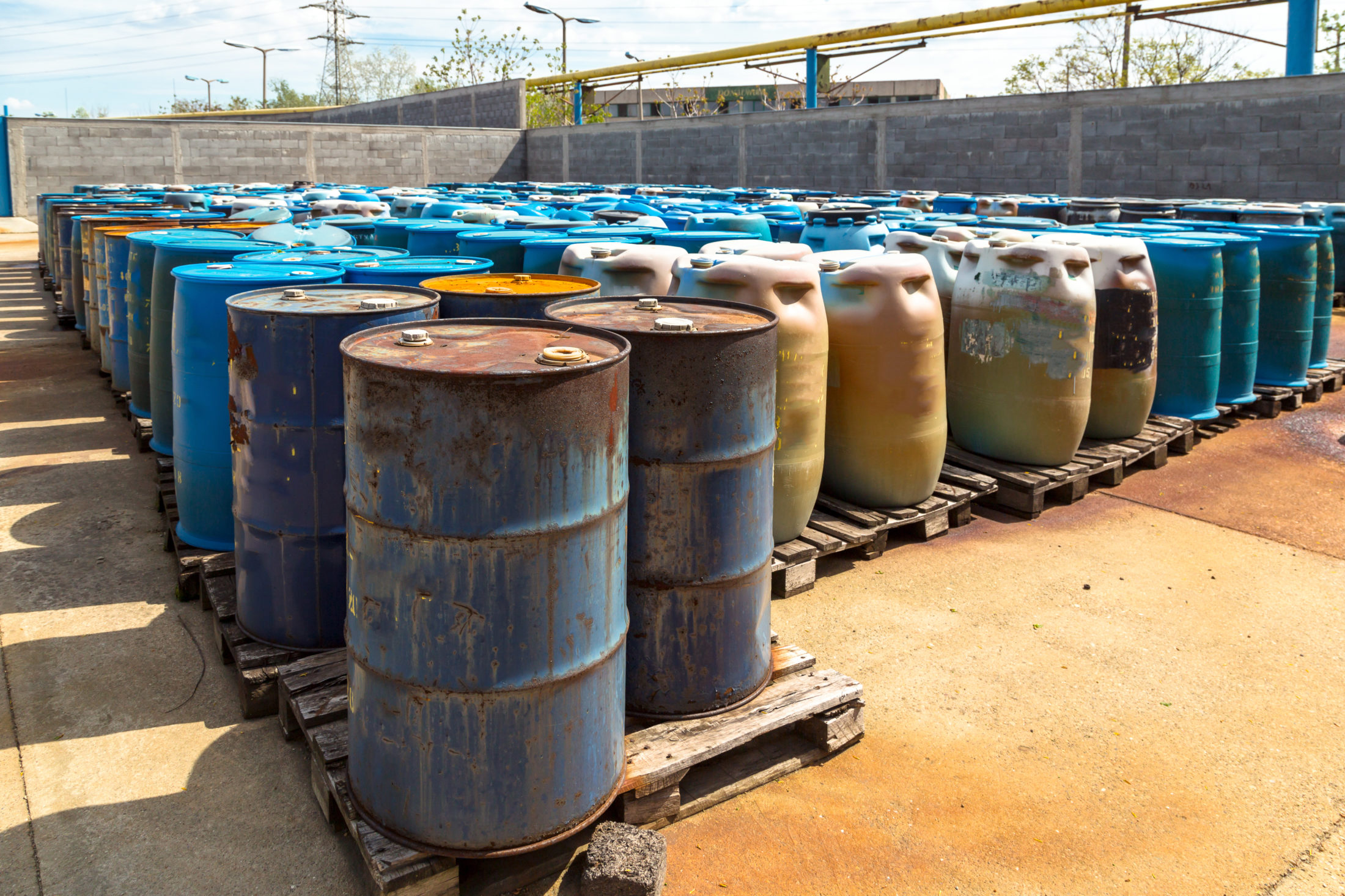 In other words, no member of the public, nor the ministry for that matter, can readily retrieve one, let alone several, specific paper manifests because they are not filed alphabetically by company, waste type, waste generator, waste receiver or waste transporter.

Gage said it’s extremely troubling that information on hazardous waste handlers is so difficult and costly to obtain given the government knows there have been serious violations of hazardous waste laws in the province.

One of the more spectacular of those violations occurred in 2007 in Abbotsford, where a company had stockpiled thousands of rusting barrels of toxic waste, including explosive materials, at a leased warehouse, compelling then-environment minister Barry Penner to declare a state of emergency.

In a global economy in which companies like Amazon and Shopify keep tabs on the shipment of vast quantities of consumer goods using electronic tracking technology, Gage said it’s baffling that B.C. has gone back to a paper-only system.

Courier companies have used hand-held devices for years to track goods, he points out, and using them to track hazardous waste would be cost effective and would greatly assist provincial compliance and enforcement staff.

“In this electronic age,” Gage said, document filing “should be automated.”

He imagines a system that allows provincial investigators to monitor the movements of hazardous waste in real time. “If there’s an issue with the manifest, then that’s picked up. Like they get an email saying, ‘There appears to be this quantity of hazardous waste that was delivered by this producer two weeks ago and we haven’t confirmation of where it went.’ ”

The ministry has thought about moving to an electronic filing system since at least 2005, but the idea still remains “in the scoping phase” and there are “no set timelines” for when such a system would be in place, the ministry said in response to questions from The Narwhal.

Cowichan Valley MLA Sonia Furstenau, who is running in the leadership race for the provincial Green Party and fought against the dumping of contaminated soils at Shawnigan Lake, called the slow progress toward a robust, timely hazardous waste reporting system inexcusable.

“There should absolutely be transparency when it comes to the movement of hazardous waste in the province and the expectation that there’s compliance with the regulations that exist and that there are consequences for non-compliance,” Furstenau told The Narwhal.

Furstenau called the current system “very worrying,” adding that “the potential impacts of hazardous and contaminated material on groundwater, surface water and air are significant.”

Meanwhile, Ontario has committed to fully moving to an electronic system, which it expects will be up and running by 2022.

Ontario first introduced an electronic filing option in 2002, according to Lindsay Davidson, a public affairs spokesperson at Ontario’s Ministry of Environment, Conservation and Parks. But the option was “ahead of its time,” he said. “Most facilities did not have ready access to electronic tools that would support electronic reporting from locations where waste was picked up.”

Ninety-nine per cent of hazardous waste manifests in Ontario are still filed by paper. But unlike B.C., Ontario continues to pay public servants to input key details from the paper manifests into a provincial database, Davidson said.

Usman Valiante, a senior policy analyst with the consultancy Cardwell Grove, has extensive experience in hazardous waste and waste recycling issues. He told The Narwhal that paper filing is not only archaic but is also dangerous because it creates an environment where companies are more likely to break the rules because of the time and expense involved in paper filing.

Valiante said Ontario’s move toward electronic filing is actually being driven by one of the province’s biggest hazardous waste producers.

“Basically, the chemical industry and the hazardous waste management industry said, ‘This system is so inefficient, it’s driving up costs and in some cases it’s driving illegal dumping,’ ” Valiante said. “It’s all out of self-interest.”

“An electronic system allows you to track stuff in real time, whereas a paper system doesn’t allow you any of that. Which is why, you know, Amazon doesn’t use a paper system.”

Ben Parfitt is a Victoria-based journalist and has written on water, energy, forestry and climate issues for many years.