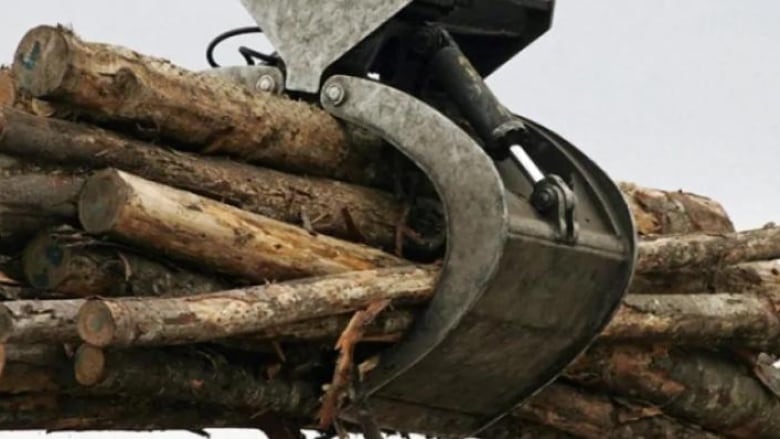 New Brunswick says Peace and Friendship Treaties don’t guarantee First Nations the right to commercially harvest timber on Crown land. But First Nations say Crown land is in their traditional territory and they have a right to make a moderate livelihood off of that land. (CBC)

The province of New Brunswick says Peace and Friendship Treaties do not allow First Nations people to make a ‘moderate livelihood’ from Crown timber.

In January, six Wolastoqey First Nations sued the province for not recognizing their treaty rights to Crown timber.

Oromocto, Woodstock, Saint Mary’s, Kingsclear, Tobique and Madawaska First Nations allege the province is infringing on their treaty rights by “wrongfully” limiting their ability to sell and trade timber to gain a “moderate livelihood.”

In a statement of defence filed mid-July, the province says the First Nations do not have the right to commercially harvest timber, only domestically.

“Historic timber harvesting practices were limited to domestic use,” the statement says.

The province says, when it comes to the treaty rights asserted by the First Nations in their lawsuit, “The province denies such a right exists and thus, cannot be recognized, protected or infringed.”

First Nations have the right … to continue the cutting and trading of timber as firewood and other wood products, as that practice has evolved over the years.​​– Lawsuit by six Wolastoqey First Nations

The province admits the Crown signed treaties between 1725 and 1768, and that another treaty was signed in 1778.

“However, none of the treaties include the right alleged by the Plaintiffs,” the statement says.

In their lawsuit, the First Nations said when the treaties were signed, “the common intention” was that the Wolastoqey First Nations would “have the right to harvest timber for the sale or trade as firewood and other wood products for necessaries on which these First nations had come to rely.” In a modern context, “necessaries” would translate to “moderate livelihood.”

The statement of defence said those common intentions never existed.

The First Nations have said enforcing the Crown Lands and Forests Act against members of their communities is a breach of the constitutionally protected treaties.

The statement of defence denies that the modern mode of harvesting timber for domestic use has evolved.

In 2012, the province charged two members of Woodstock First Nation with illegally harvesting Crown timber and with illegal possession of that timber, the lawsuit says. The trial went on from July 2013 to November 2014.

During that time, four expert witnesses testified to confirm those treaty rights.

The lawsuit says the province stayed those charges and allegedly “avoided a decision of the provincial court judge on the treaty rights.”

The province denies this allegation.

In the fall of 2019, the province charged five people under the same legislation. Four of them were members of First Nations and were harvesting Crown timber to sell as firewood, “to the extent of obtaining a moderate livelihood,” the lawsuit says. A fifth was someone who purchased that wood.

The lawsuit says that in both those cases, the province “wrongfully failed to recognize and respect the [First Nations’] Treaty rights.”

This infringement is unconstitutional, the suit alleges, and has caused “substantial financial loss to the [First Nations] and their members.”

The province denies that it wrongfully charged those five people, and says the four were harvesting the timber “for commercial gain and not domestic use.”

In 1999, the Supreme Court of Canada ruled on the R. v. Marshall decision, which allows Indigenous peoples to earn a “moderate livelihood” through commercial fishing in Atlantic Canada. But it did not include timber.

In 2006 the same court ruled two Wolastoqi loggers and a Mi’kmaw logger had an inherent right to harvest timber from Crown lots for domestic use, but not to sell or trade.

The province is asking the court to dismiss the case with costs.

No court date has been set yet to hear the case.

Hadeel Ibrahim is a CBC reporter based in Saint John. She can be reached at hadeel.ibrahim@cbc.ca