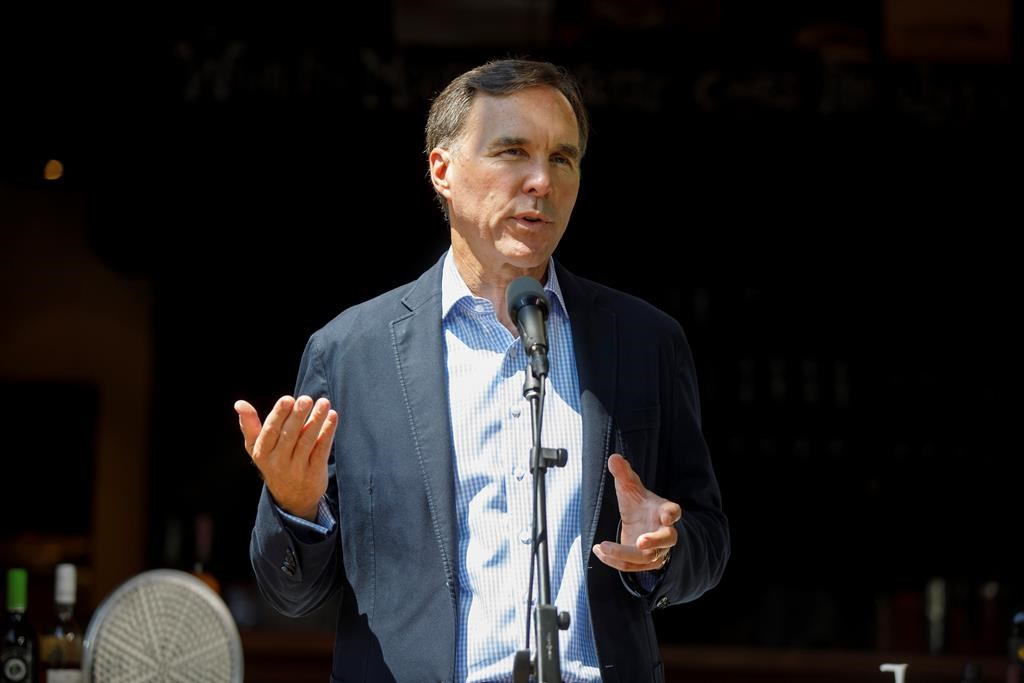 Finance Minister Bill Morneau speaks to media during a press conference in Toronto, on Friday, July 17, 2020. File photo by The Canadian Press/Cole Burston

Opposition parties are asking the federal ethics watchdog to widen his probe of Bill Morneau regarding the WE organization as the finance minister continues to face calls for his resignation.

Conservatives and New Democrats have written to ethics commissioner Mario Dion to look into trips Morneau took three years ago, part of which were paid for by the WE organization.

Morneau said Wednesday he had just repaid WE Charity more than $41,000 for expenses the group covered for trips his family took to Kenya and Ecuador in 2017 to see some of its humanitarian work.

WE said the Morneau family trips were meant to be complimentary, part of a practice of showing donors WE’s work to encourage them to give more.

Morneau said he always planned to personally cover those amounts, but WE never charged him, much to his surprise after poring through receipts ahead of his testimony.

He said his family has since made two $50,000 donations to the charity.

The conflict of interest law prohibits ministers or their families from accepting paid travel, a lesson the government learned when Trudeau was found afoul of the rule for his family’s 2016 vacation to the Aga Khan’s private island.

On Thursday, the Tories said Morneau’s trips violated several sections of the Conflict of Interest Act — listing them out during a morning press conference — and called on him to resign as minister.

“Why hasn’t Justin Trudeau fired him? I don’t ask that rhetorically, but specifically,” Poilievre said.

“If Justin Trudeau imposes any level of ethical standard on Bill Morneau, then others would ask that he impose it on himself.”

Opposition parties are asking the federal ethics watchdog to widen his probe of Bill Morneau regarding the WE organization as the finance minister continues to face calls for his resignation.

Trudeau, too, is facing an ethics probe for not recusing himself during discussions about awarding WE a deal to run the government’s $912-million program that will pay students grants of up to $5,000 based on the hours they volunteers.

Trudeau and Morneau have apologized for not declaring possible conflicts because of their familial ties to the organization — Trudeau because of speaking fees paid to his brother, mother and wife, and Morneau because one of his daughters is nearing the end of a one-year contract in an administrative role.

NDP MP Charlie Angus told the ethics commissioner in a letter that Morneau’s trips bring “to another level” concerns about the finance minister’s involvement in handing WE a contract to run the student-volunteer program.

The deal would have paid the organization $43.5 million in fees.

“WE may well indeed be engaged in philanthropic work, but as the case of the Aga Khan decision, it is plainly impermissible for a minister of the Crown to receive financial or in-kind gifts of this nature,” Angus wrote.

Separately, the House of Commons’ ethics committee decided Thursday to examine the ethics processes in the Prime Minister’s Office, to determine whether they need structural changes. The committee is already seeking copies of records related to the Trudeaus’ speaking engagements to inform a case study of the conflict-of-interest regime the committee monitors.

Two of Morneau’s cabinet colleagues — Heritage Minister Steven Guilbeault and Economic Development Minister Melanie Joly — came to his defence, saying the finance minister explained himself at committee and apologized for any oversight.

Speaking at a virtual press conference in Montreal, where they announced investments in clean technology, Joly said Canadians would judge Morneau on his performance in steering the country through the worst economic downturn in a century.

“In these circumstances he was able to show leadership and come up with some programs that we’ve never seen as a country, including the wage subsidy, including the CERB,” she said.

“In that sense, Canadians will, I’m convinced, see that his work has been relevant and impactful in the context of the last months.”

It has been nearly three weeks since the government took over the program after WE backed out over the controversy of its involvement, and Ottawa has yet to roll it out.

Student groups have asked the Liberals to push the money into other supports, saying it’s too late in the summer for students to make the most of the program and earn enough to pay for schooling costs in the fall.

Employment and Social Development Canada, which oversees the program, said in a statement Thursday, echoing previous ones, that officials are “working diligently to develop a transition plan, including looking at options on how best to proceed.”

“This means there will be delays but more information will be provided as soon as it is available,” spokeswoman Isabelle Maheu said in an email, adding officials “cannot comment or speculate on aspects of program design until a new plan is announced.”

This report by The Canadian Press was first published July 23, 2020.— With files from Catherine Levesque

Finance Minister Bill Morneau paid back more than $40,000 to WE Charity just hours before he was to testify before MPs

Blinded by his own privilege, Bill Morneau is painfully out of touch with Canadians