Five big issues that point to a lack of progress made in the decades since Canada’s most prominent Indigenous land dispute. 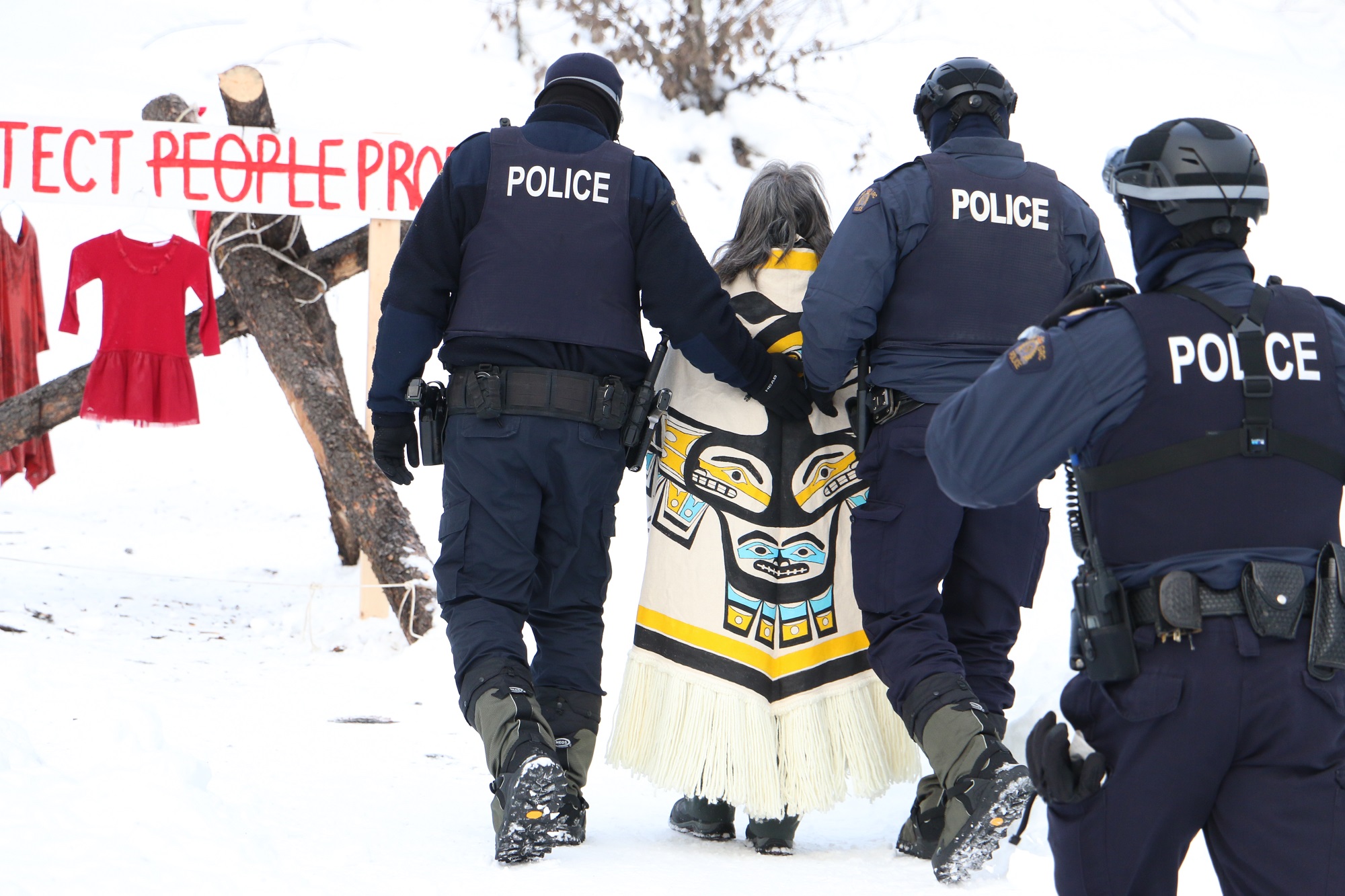 Freda Huson is arrested in February at the end of a long standoff between RCMP and Wet’suwet’en land defenders in northern BC. There are many parallels between the Wet’suwet’en battle and the now 30-year-old Oka crisis. Photo by Amanda Follett Hosgood.

was a 16-year-old living in a sprawling suburb north of Toronto when Mohawk land defenders faced off against military and police forces at Kanehsatake in the summer of 1990.

The Tyee’s legislative bureau chief on 13 years reporting on health, equality and BC politics.

I was only vaguely aware of the deadly standoff unfolding just a five-hour drive away. A private golf course, supported by the town of Oka in Quebec, wanted to expand onto land claimed by the Mohawk Nation in neighbouring Kanehsatake. The fairways and greens would push through a pine forest sacred to the Mohawks, where their ancestors were buried.

If I had an opinion on the Oka crisis then, it wasn’t strong enough to last 30 years. I do recall a vague sense of injustice and discomfort with the white, middle-class opinions that surrounded me.

Thirty years later and more than 4,000 kilometres away, I was a journalist covering the Wet’suwet’en conflict as it unfolded 100 kilometres south of my home in Smithers, British Columbia this winter. Land defenders supporting hereditary chiefs had blocked portions of the Morice West Forest Service Road, denying access to pipeline builder Coastal GasLink. The RCMP had responded by filling hotels in local communities with armed officers ready to remove the barricades.

I made many reporting trips to the Morice, travelling a snowy highway and rugged forestry road in temperatures that sometimes dipped below -40 C. On my final journey before the RCMP moved in to clear the blockades in early February, I travelled 22 hours by car, foot and snowmobile to spend six days reporting for The Tyee from the Unist’ot’en Healing Centre. I was there when heavily armed police, supported by helicopters and search dogs, made the last arrests.

I decompressed one evening several weeks later by curling up in front of Alanis Obomsawin’s 1993 NFB documentary Kanehsatake: 270 Years of Resistance.

I was struck by how little had changed.

The standoff at Oka reached a crisis point 30 years ago this week. The Sûreté du Québec, the province’s police force, moved in on July 11 to clear the blockade. A 15-minute firefight left Cpl. Marcel Lemay dead. The standoff lasted another 77 days.

In addition to the painful irony that — in both cases — Indigenous residents were barricaded inside traditional healing centres designed to alleviate the trauma of colonization, there was a sense of déjà vu as, once again, the hum of surveillance helicopters and wafting woodsmoke from ceremonial fires were the background for a tense, dangerous time.

Both events involved the use of court injunctions to arrest and remove protesters, only to drop charges later. (All but three Kanehsatake land defenders were acquitted; all charges were dropped in the Wet’suwet’en standoff.)

Thirty years later, the racism and violence still exist. Chanting crowds opposing the roadblocks burned effigies of Mohawk warriors during the Oka crisis; now the hate has moved to social media. And while no one died in the Wet’suwet’en protest, the potential was always present as the RCMP treated the exercise as a military operation, including lethal overwatch.

Thirty years after Oka, here are five big issues that remain unresolved and raise the risks of more dangerous standoffs.

When nearly 1,000 Sûreté du Québec police officers descended on Kanehsatake, a community of 1,500 people, Oka mayor Jean Ouellette denied responsibility. “We didn’t order the police operation or carry it out,” he told reporters. In fact, the municipality had requested both the injunction and police involvement.

Similarly, as RCMP forces increased and conflict appeared imminent on Wet’suwet’en territory this winter, it was unclear who was in charge. B.C. Premier John Horgan said he didn’t control police. RCMP claimed simply to be carrying out an enforcement order handed down in the BC Supreme Court as part of an injunction obtained by Coastal GasLink on Dec. 31.

But in early March, after police had cleared the road of barricades and dozens of Wet’suwet’en supporters were arrested, it was revealed the province and RCMP had discussed moving ahead with the action. In late January, Solicitor General Mike Farnworth had written to RCMP Deputy Commissioner Jennifer Strachan. He authorized additional police resources “to the extent necessary to maintain law and order” and asked the deputy commissioner to inform his ministry of planned actions, adding that “operational decisions are solely within the internal management and control of the RCMP.”

“The law still has to be respected!”

The Oka documentary includes scenes of an Oka resident yelling about the rule of law during a heated verbal dispute as Sûreté du Québec officers carried out the injunction.

“Rule of law” would become a much-repeated mantra during the Wet’suwet’en standoff, a call-and-response initiated by the B.C. premier and chorused by those inconvenienced by blockades that sprung up across the nation in support of the Wet’suwet’en. But as legal experts were quick to point out, the law is not black and white — case law is, by its nature, evolving and open to interpretation.

The 1997 Delgamuukw versus the Queen court ruling affirmed that Wet’suwet’en land title had never been extinguished. Yet in her decision granting Coastal GasLink a permanent injunction to access its pipeline route, Justice Marguerite Church dismissed the Delgamuukw decision, saying “the Aboriginal title claims of the Wet’suwet’en remain outstanding and have not been resolved either by litigation or negotiation.”

More recently, B.C. legislated the Declaration on the Rights of Indigenous Peoples Act, which includes Article 4, the right to self-determination and self-government, and Article 10, that Indigenous peoples not be forcibly removed from their lands. It too needs to be part of the discussion of the rule of law.

And when it comes to the rule of law, legal experts have questioned whether RCMP were following their own laws when they implemented a checkpoint and exclusion zone at kilometre 27 on the Morice forestry road on Jan. 13, at times blocking access to media, legal observers and volunteers delivering supplies to camps. Anyone who did gain access was required to show identification, which was recorded by the RCMP.

Legal experts have noted that the exclusion zone, which was arbitrarily implemented and expanded to include a support camp that sprung up outside the checkpoint, went beyond the court-issued injunction and may have constituted police overreach.

Similarly, truckloads of food were delayed or denied access at Kanehsatake, some arriving pierced by bayonets and all but emptied of their contents. As the standoff dragged toward fall, deliveries of warm clothing were turned away.

In January, Wet’suwet’en hereditary chiefs, the BC Civil Liberties Association and the Union of BC Indian Chiefs, supported by West Coast Environmental Law and Pivot Legal Society, filed a complaint with the RCMP Civilian Review and Complaints Commission urging it to investigate what it called the “improper and unlawful” actions of the RCMP in implementing and enforcing a checkpoint and exclusion zone on the Morice forest road.

“The RCMP checkpoint, which is at the 27-kilometre mark, lies completely outside the scope of the enforcement power granted to the RCMP by the injunction,” BCCLA executive director Harsha Walia said.

The investigation request was later denied by the RCMP watchdog because a similar complaint related to policing of Indigenous-led anti-shale gas protests in New Brunswick had already sat with the force for a year.

In one Kanehsatake scene, a military officer is seen directing journalists to leave the area. Many remained, though they are cordoned off behind barbed wire.

“We’re your eyes, and they’re trying to blind us by getting the press out of here. I’m not going to leave. I’m not going to be blinded,” said Reuters photographer Robert Galbraith, one of two journalists who braved the barbed wire to report from behind military lines. Journalists who chose to leave the confined area — including Globe and Mail reporter Geoffrey York — were taken into custody and questioned.

“I think the thing that’s the most unbelievable is that in a country like Canada we’re allowing the army to tell us what can be published in our newspapers and what can be put on our nightly news,” York said.

The Tyee was among several reporters turned away when RCMP implemented the exclusion zone. The following day, police began requiring identification and proof of affiliation from reporters crossing the checkpoint. Only a handful were within the exclusion zone when arrests began at kilometre 39 on Feb. 6.

In a video posted to social media, police can be heard threatening journalists with arrest as the early morning raid began. The journalists are told they have 10 minutes to leave the area. In the end, Vice reporter Jesse Winter and an independent journalist were driven by RCMP past their vehicles and dropped 30 kilometres away in Houston.

The standoff at Kanehsatake ended when residents walked out on Sept. 26, 1990. The golf course expansion was cancelled but, 30 years later, the bigger land claim issue remains unresolved. While the federal government purchased the land under an agreement with the Mohawks, it has never been formally transferred to the nation.

In northern B.C., negotiations between Wet’suwet’en hereditary chiefs and the federal and provincial governments are ongoing. It’s a battle that has continued for more than 30 years, since the Delgamuukw court case began in Smithers in 1987. This spring, the parties picked up where they left off more than 20 years ago, when the Supreme Court of Canada decision affirmed Wet’suwet’en land title.

In the hopeful and prophetic — if premature — words of a masked Mohawk warrior 30 years ago: “Maybe this is the decade that roadblocks are going to be throughout Canada. Fish are dying, the air’s dying, the plants are dying. We’re not too far behind them, as the Mohawk Nation.”

It would take three decades for roadblocks to appear across Canada. When they did, it’s not hard to understand why the Mohawk Nation was among the first to show solidarity with the Wet’suwet’en.

Maybe this is the decade when governments and law enforcement start approaching Indigenous land claims differently.