Conditions at plants contributed to transmission of virus, experts say, as country remains second only to US for deaths 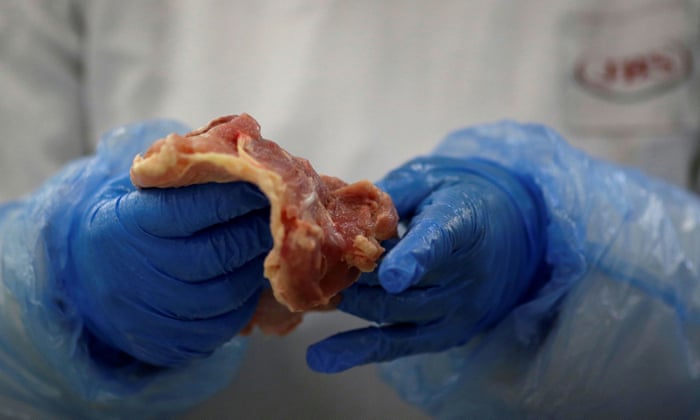 JBS and BRF, two of the country’s biggest meat companies, are under the spotlight over their handling of the coronavirus pandemic. Photograph: Ueslei Marcelino/Reuters

Brazilian meat plants helped spread Covid-19 in at least three different places across the country as the virus continues to migrate from big cities to the country’s vast interior, experts have said.

At the beginning of this week the country was second only to the US with 1.88 million confirmed Covid-19 cases and 72,833 deaths .

Its powerful agribusiness sector is allied with the country’s far-right president, Jair Bolsonaro, who has dismissed the pandemic as a “little flu”. The beef sector is worth $26bn (£20.7bn), according to the Brazilian Confederation of Agriculture and Livestock (CNA), while its chicken industry is worth another $8bn.

Meat plants have stayed open during the pandemic, and staff work closely together, often in refrigerated areas. Other countries, including the US, Canada, Ireland and Germany, have also seen clusters around slaughterhouses.

The conditions can create perfect Covid-19 breeding centres, said Priscila Schvarcz, a prosecutor from the Public Ministry of Labour (MPT), a branch of the federal prosecution service charged with supervising labour laws.

“We see a lot of workers infected,” said Schvarcz, a member of a national meat plant taskforce based in Rio Grande do Sul state in southern Brazil.

Rio Grande do Sul has been hard hit. As of 23 June, 4,957 meat workers had tested positive at 32 plants in the state – a third of the total coronavirus cases in the area, prosecutors said. Five employees and 12 people in contact with them had died.

A study for the MPT showed that Covid-19 cases in central and southern Brazil were clustered around towns where meat plants were located and workers lived. “There is a direct relationship,” said Ernesto Galindo, the researcher who produced the study.

BRF said it was working with the Brazilian and Chinese authorities to resume deliveries. The company said that 98 of 2,873 workers at its plant in Lajeado, Rio Grande do Sul, tested positive in late May. JBS did not comment on China’s suspension of imports.

‘The focus was cows, not employees’

At a JBS plant in Dourados, in Mato Grosso do Sul state in the centre-west region, more than 4,000 employees were tested and nearly a quarter were positive, prosecutors said. The company suspended 1,600 workers on full pay but did not close the plant. As of 14 July, the town had 3,481 cases, a quarter of the state’s total.

The JBS plant in Dourados “was the initial focus for the outbreak”, said Andyane Tetila, an infectious diseases specialist in Dourados who works for the state health service. The JBS plant has 103 indigenous workers, many of whom live in nearby reserves where more than 150 people were subsequently infected, said Indianara Machado, an indigenous nurse who works in the reserve.

JBS said it had put all its indigenous workers on paid leave and is supporting initiatives to control and prevent new coronavirus outbreaks in more than 100 municipalities across Brazil. Labour prosecutors said JBS moved quickly to contain the outbreak. “The company collaborated,” said Jeferson Pereira, a labour prosecutor in Dourados. “It contracted nurses and technicians to accompany visits.”

Another 85 people tested positive at a BRF plant in the town. The company said workers in this situation are suspended on pay, given medical attention and monitored by occupational health specialists at the company until they recover.

In June, a judge closed a JBS plant in the remote Amazon town of São Miguel do Guaporé in the north-west of Brazil for the second time after infections rocketed. As of 25 June, 377 of the plant’s 940 employees were infected – then more than half of the town’s caseload, prosecutors said.

Leandro da Conceição, 33, one of the workers in the plant, said he lost his sense of smell and taste. When he told his supervisor, he was ignored and kept working even though he got sicker and sicker.

“It reached a point I couldn’t stand it any more. I told my superior I was not well,” he told the Guardian. “His focus was the cows, not the employees, it was production.”

Conceição was sent home after he produced his own positive test result. He and another worker later lost their jobs after a WhatsApp audio that featured them and other workers complaining about infections at the plant was published by local media. Both men were told falling production was the motive. “They had no reason to sack us,” he said. “I never missed work.”

Local labour prosecutor Helena Romero said: “We realised that the company was not carrying out containment measures, we observed that often workers kept working even though they had symptoms, and this could have contributed to spreading the illness.” The plant has since reopened.

After the outbreak in Lajeado, BRF signed an extrajudicial deal with labour prosecutors. The company said it had tested 31,000 employees nationwide in the past two months. Four of its plants had closed for testing and all 34 are now operating. Preventative measures included reducing bus capacity by half and suspending workers in Covid-19 risk groups. A permanent committee of specialists monitors its actions.

JBS – the world’s biggest meat company – has not signed any agreements with prosecutors. Court orders have imposed temporary shutdowns and in some cases testing at three of its plants in Rio Grande do Sul. On 23 June, a judge ordered all workers to be tested at a fourth JBS plant in the state. All have since reopened, prosecutors said.

JBS did not explain why it had no agreements with labour prosecutors and declined to comment on outbreaks at individual plants. “JBS does not comment on legal decisions,” it said.

The company said that the health and safety of its team members was its key priority. It had adopted a strict protocol on control, prevention and safety at all processing units, in full compliance with government-mandated rules.

JBS said it followed guidance from the US Centers for Disease Control and Prevention and the World Health Organization as well “specialised physicians”. “Each test assessment takes place on a case-by-case basis,” the company said. It disinfected factories daily and takes workers’ temperatures, and has increased its fleet of buses and put those in risk groups and anyone with symptoms on paid leave.

Jane Goodall: humanity is finished if it fails to adapt after Covid-19

A Warning from the Chickens of the World