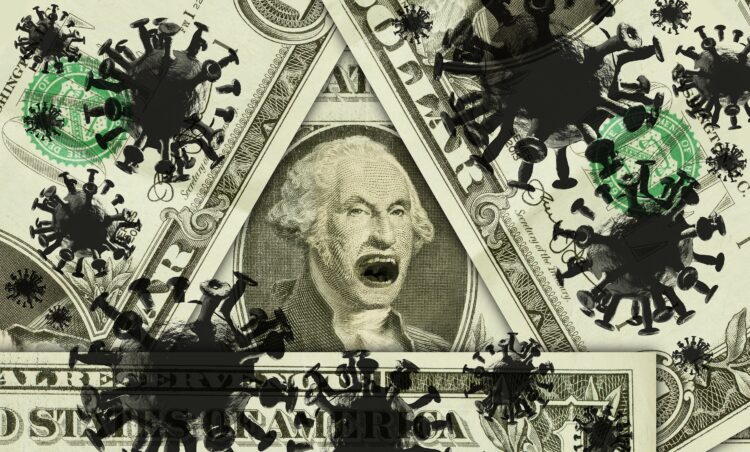 Every time we’re confronted with crisis in the modern world the vultures of the corporate world are soon circling their next prey. In her seminal book, The Shock Doctrine, Naomi Klein plots the history of the twenty-first century as a struggle of populations against free market neo-liberalism. Each time a country undergoes crisis, whether engineered or not, in swoop the disaster capitalists armed with degrees soaked in free market dogma. They prescribe removal of all impediments to the market characterised by pesky government intervention. Instead of providing aid when they need it most, governments have allowed crisis after crisis to be exploited for profit. The current pandemic is no different.

Klein argues that the disaster capitalists are already on the move with Trump’s proposed $700 billion stimulus package that includes cuts to payroll taxes (which fund many entitlements). The world-renowned author told Vice:

‘They’re not doing this because they think it’s the most effective way to alleviate suffering during a pandemic — they have these ideas lying around that they now see an opportunity to implement’.

‘these are the perfect conditions for governments and the global elite to implement political agendas that would otherwise be met with great opposition if we weren’t all so disoriented’.

Rising Pharmaceuticals, the drug giant who owns chloroquine phosphate, a drug that has been touted as a possible treatment for the coronavirus, raised the price of the drug by 98 per cent between December 2019 and January 2020 from roughly $3.87 to $7.66 for a 250-milligram tablet. They quickly backtracked after public backlash, not wanting to be seen as another Martin Shkreli.

In Canada, the Alberta Government have used the distraction of the pandemic to rapidly deregulate oil extraction in the Alberta tar sands. They have been Alberta pushing through the construction of controversial oil pipelines, swiftly dismantling legislative, regulatory and financial barriers to oilsands development, and they have even suspended environmental reporting and amended air-quality monitoring requirements because of ‘undue hardship’ for fossil fuel firms.

Climate change deniers have used the lockdown as a way to vilify environmentalism. Brendan O’Neill, the Editor of the Koch brothers-backed website Spiked, compared the lockdown to the ‘warped dystopia’ of a green future and argued that ‘this pandemic has shown us what life would be like if environmentalists got their way’. Global Warming Policy Foundation (GWPF), the Tufton Street-based climate deniers, have also joined the cause posting an article that audaciously claims in contrast to climate change: ‘plagues are real’. Meanwhile, Clintel, the Dutch climate science denial group, issued an open letter urging the world to ‘fight virus not carbon’. They even demanded that the EU’s Green New Deal be abandoned because, ‘compared to COVID-19 climate change is a non-problem’.

Friends of the Earth (FOE) have warned that the pandemic has given us ‘disaster capitalism at its worst’. FOE analyst Lukas Ross issued a statement condemning fossil fuel companies for, ‘wasting no time exploiting the coronavirus for profit’. Oil and gas firms have been jumping at the chance to lobby for tax cuts and regulatory cuts whilst the public is distracted. FOE found that at least 11 firms lobbied the US Government to include tax cuts in the Coronavirus Aid, Relief, and Economic Security (CARES) Act. They succeeded as well. The FOE report states that:

As is always the case, the powerful choose moments of crisis to further expand their power. Naomi Klein puts it thusly:

‘We’re seeing in real time that we are so much more interconnected to one another than our quite brutal economic system would have us believe’.

Expect calls for the free market trifecta of the sale and privatisation of public assets and services, mass cuts to both the welfare state and regulatory restrictions, and top rate tax cuts. 2008 should have been the swan song for this type of free market economics, yet here in the UK we swiftly elected a government who made Thatcher’s sweeping sale of state assets in the 1980s look like a suburban garage sale. Thatcher sold £21bn worth of shares in British Airways, the British Airports Authority, British Petroleum, Rolls-Royce and the Royal Ordnance Factories. Osborne blew that out of the water. It was estimated that 2016 alone saw the sale of British assets worth £60 billion. The student loans book fetched an estimated £12 billion, whilst King’s Cross raked in £360 million. Private Ambulances cost the taxpayer £60 million annually, part of the £9.2 billion now spent every year on services delivered by the private sector.

In my book, Brexit: The Establishment Civil War, I argue that post-Brexit there is a shock coming that will allow the free marketeers in Boris Johnson’s cabinet to fully enact their fourth wave of Thatcherism. Corona virus and the ensuing economic and social chaos is that shock, and the vultures are already feeding on the corpse.

Josh Hamilton is Author of Brexit: The Establishment Civil War and Host of Chatter