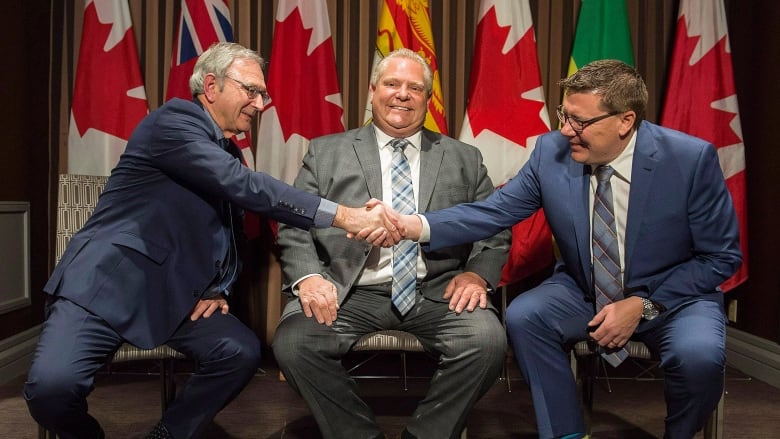 A group of premiers band together to develop nuclear reactor technology. Ontario, Saskatchewan and New Brunswick will work together to research and build small modular reactors. Ontario Premier Doug Ford, centre, looks on as Saskatchewan Premier Scott Moe, right, and New Brunswick Premier Blaine Higgs shake hands during a meeting of Canada’s premiers in Montreal. The premiers are in Toronto this week for another meeting. (Graham Hughes/Canadian Press)

The SARS-Cov-2 pandemic and concomitant economic recessions have resulted in many calls for Green New Deals (GNDs) to create jobs and tackle climate change. For example, in November 2019, the European Commission published a series of documents aiming for a Green New Deal see https://ec.europa.eu/info/strategy/priorities-2019-2024/european-green-deal_en  And in April, the climate and environment Ministers in 17 European countries called on the European Commission to include a GND as part of the EU’s economic recovery plan. https://www.climatechangenews.com/2020/04/09/european-green-deal-must-central-resilient-recovery-covid-19/

A major defining issue in proposed GNDs is whether or not they should include nuclear power. Thankfully, the EU Commission recently decided to exclude new nuclear power – see discussion at  https://energytransition.org/2020/06/eu-recovery-plan-goes-green-and-excludes-nuclear/ But the arguments are probably not over yet in the corridors of power in the EU.

Nuclear proponents consider that nuclear can make a significant contribution to tackling climate change. This ignores that nuclear electricity makes a small (~3%) contribution to world energy and this cannot be increased quickly. It also ignores many scientific reports that nuclear power plus all its fuel activities including uranium mining and nuclear wastes is not low-carbon, with an average ten-fold larger carbon footprint compared to the renewables.

However some proponents of GNDs, including US Representative Alexandria Ocasio-Cortez, remain ambivalent about nuclear power. In May 2019, she stated “I don’t take a strong anti or pro position on [nuclear power]” https://morningconsult.com/2019/05/06/ocasio-cortez-green-new-deal-leaves-door-open-nuclear  However other prominent environmentalists, including Helen Caldicott, Naomi Klein, Greta Thunberg, Holly Near, Molly Scott Cato, Rebecca Harms and many others, remain opposed to the inclusion of nuclear in Green New Deals.

Many green organisations state or infer that GNDs must embody ethical ideals, and must aim for justice and fairness. They argue that such moral stances are what make Green New Deals “green”, rather than mere climate mitigation techniques. For example, the EU’s Green New Deal for Europe supports “climate justice” around the world and the Canadian New Democratic Party’s GND proposals stress respect for indigenous rights. In their views, nuclear power is incompatible with such moral emphases and aims.

One matter often cited is the lack of intergenerational justice re nuclear wastes. The radioactive nuclides in nuclear waste remain hazardous for hundreds of thousands of years. Such long periods mean these problems are left to future generations. This is considered unethical and in conflict with the implicit moral stance underlying Green New Deal proposals.

Another matter is the adverse effect of nuclear power on poor communities and indigenous peoples. For example, uranium mining mostly occurs in areas occupied by indigenous peoples, including parts of Namibia, Niger, Mali, Australia, Canada, India, and the United States. Indigenous communities in these countries have suffered multiple adverse health effects as a result. Continued uranium mining for nuclear power is also contrary to the green notion of sustainability.

A further example lies at the other end of the nuclear fuel chain, ie the radioactive nuclear waste produced by nuclear power plants. Often sites proposed as possible hosts for these nuclear wastes also have high proportions of indigenous populations. For example, in January 2020, the Saugeen Ojibway Nation in Canada voted overwhelmingly against a Canadian nuclear waste proposal. The proposed Yucca Mountain repository in the US state of Nevada is also being resisted by the Western Shoshone people, on whose lands the site is located. There is more than a whiff of colonialism in these two examples, ie nuclear colonialism.

Another aim in most GND proposals is the need for rapid climate action: urgency is a key point. Nuclear power is incompatible with such urgency, as it takes at least 15 to 20 years from the proposal stage to the reality of connecting new nuclear to the electricity grid.

If we include high costs of new nuclear, the rapid technical advances in renewable energy, the plummeting costs of solar and PV, the risk of more catastrophic accidents after Chernobyl and Fukushima, the increased cancers in children near nuclear facilities and the umbilical connection with nuclear weapons, it is clear there is little justification for including nuclear power in New Green Deals.

One thought on “Green New Deals and Nuclear Power: should Nuclear Colonialism be permitted to continue?”