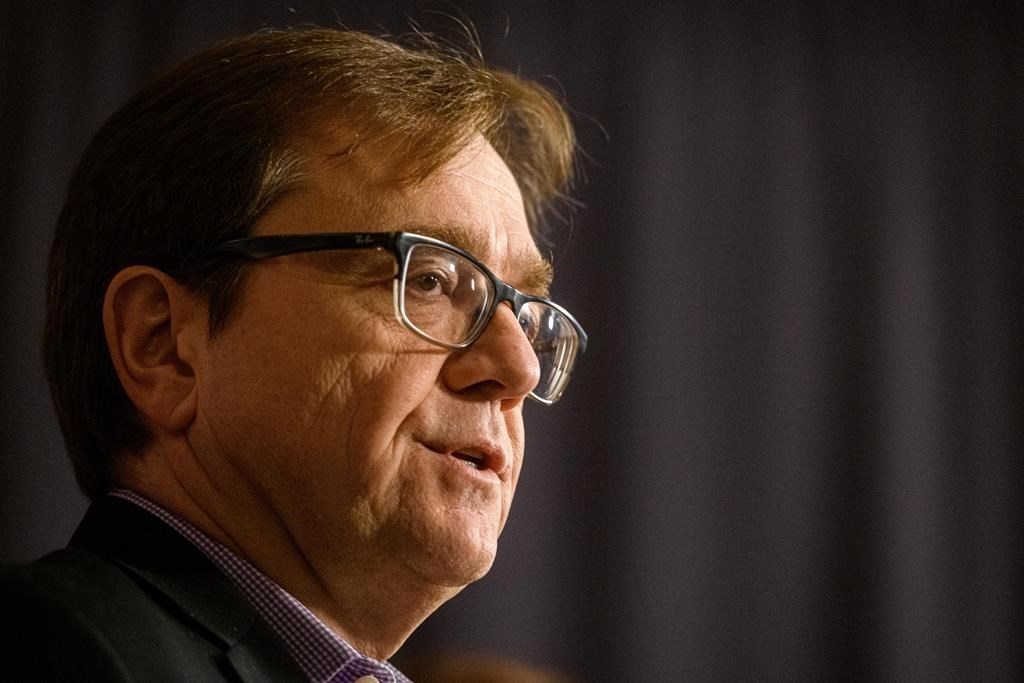 Minister of Environment and Climate Change Jonathan Wilkinson speaks to media during the Liberal cabinet retreat at the Fairmont Hotel in Winnipeg, on Sunday, Jan. 19, 2020. File photo by The Canadian Press/Mike Sudoma

Environment Minister Jonathan Wilkinson is reconsidering a decision in December to keep the federal government out of the approvals process for a major coal-mine expansion in Alberta.

The existing Vista mine, which is owned by the U.S. coal giant Cline Group, began shipping coal for export in May 2019 and the company is now looking to double, or possibly even triple, its output.

Fraser Thomson is a lawyer for Ecojustice, one of 47 environment, Indigenous, health and faith-based organizations that this week wrote to Environment Minister Jonathan Wilkinson asking him to take a second look at the expansion.

Wilkinson declined in December to order a federal impact assessment of the project near Hinton, Alta., between Edmonton and Jasper, saying the potential risks to the environment and Indigenous rights would be dealt with by a provincial approval process.

That was the ultimate in “climate hypocrisy,” Thomson said Wednesday.

Thomson said if this were a brand new mine, rather than an expansion, it would automatically trigger a federal assessment. Wilkinson has the power to order such an assessment of this one even though it is not mandatory, said Thomson.

In an emailed statement, Wilkinson’s spokeswoman Moira Kelly said the government is studying the issue anew and Wilkinson will make a fresh decision by the end of July.

Thomson said the federal government’s decision to wash its hands of the decision in December does not jibe with its three-year-old program to convince the world to wean itself off coal power. Canada and the United Kingdom jointly launched the Powering Past Coal Alliance in 2017, aiming to convince the world’s wealthiest countries to eliminate coal as a source of electricity by 2030, and the rest of the world to do so by 2050.

Canada is phasing coal power out domestically now, with the four provinces that still use coal to make electricity working on plans for stopping.

When the alliance began in November 2017, Prime Minister Justin Trudeau called coal “the dirtiest of all fossil fuels.”

“Let me be very blunt about this. Coal represents perhaps the greatest challenge to the world not meeting its climate-change targets,” Trudeau said. “Unless we reduce coal consumption, we are not going to be able to prevent catastrophic global warming.”

Environment Minister Jonathan Wilkinson is reconsidering a decision in December to keep the federal government out of the approvals process for a major coal-mine expansion in Alberta.

Until 2019, Canada also didn’t export very much coal for power generation at all. In 2018, of 32 million tonnes of coal exported by Canadian firms, less than two per cent was thermal coal for power. The rest is metallurgical coal, with different composition, used to make steel.

The Vista mine changed that, with as much as six million tonnes of coal produced each year, all of it for export and mostly to Asia. The expansion will increase that to between 13 million and 15 million tonnes.

Thomson said the phase-out of thermal coal in Canada is one of the best climate policies Canada has implemented. Coal accounts for less than 10 per cent of Canada’s electricity, but generates more than three-quarters of the greenhouse-gas emissions from electricity production.

“If we’re not OK burning coal at home we shouldn’t be OK feeding coal for consumption overseas,” he said. “If you are a country that is being lobbied by Canada to phase out coal, you’re going to see how hypocritical that request is if the very coal that you’re burning is coming from Canadian mines.”

About 38 per cent of the world’s power comes from coal now.

Besides studying the Vista project in particular, Kelly said the government is examining coal more broadly.

“We have also launched a strategic assessment on thermal coal to better understand the potential impact of thermal coal mining activity, to ensure effects within federal jurisdiction — especially related to climate change — are fully considered in the federal impact-assessment process,” she wrote.

This report by The Canadian Press was first published July 15, 2020.